This compared with the 56 coronavirus-related fatalities and 7,779 new cases reported on Friday morning.

The new case numbers did not include 6,651 positive results from antigen tests over the previous 24 hours, which would raise the total to 13,387.

Of those in hospitals, 1,276 were seriously ill with lung inflammation (down from 1,277) and 622 were dependent on ventilators (down from 644), the Centre for Covid-19 Situation Administration (CCSA) reported on Saturday afternoon.

Of the seriously ill patients, Bangkok had the most cases at 126, followed by 77 in Nakhon Ratchasima, 59 in Ubon Ratchathani, 47 each in Udon Thani and Suphan Buri, 38 in Khon Kaen, 37 in Nakhon Sawan, 32 in Nakhon Si Thammarat, 31 in Chiang Mai and 30 in Chon Buri. 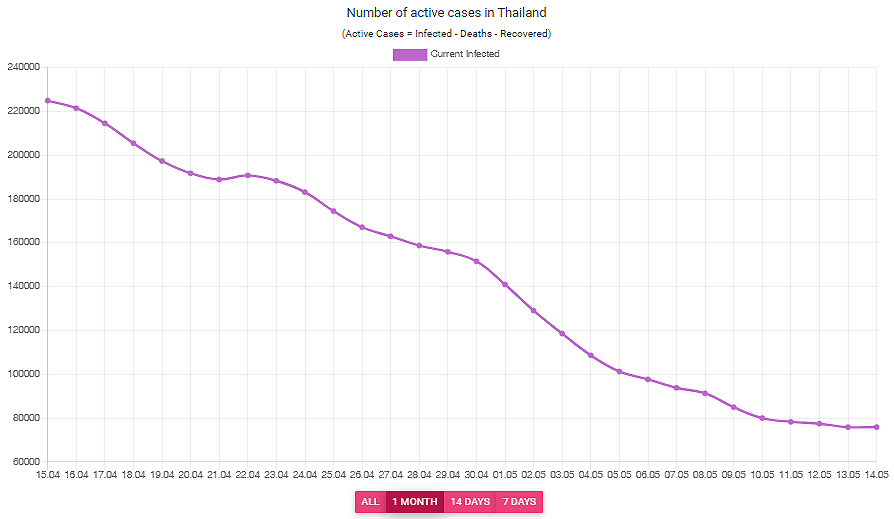 The CCSA said the coronavirus-related fatalities were aged from 43 to 100 years, with the average age of 81. They were 31 men and 23 women. All were Thais.

Bangkok reported seven more deaths and there were three fatalities in adjacent provinces – two in Nakhon Pathom and one in Samut Prakan.

Other provinces in the Central Plains saw 13 deaths – two each in Saraburi and Lop Buri and one each in Nakhon Sawan, Chachoengsao, Samut Songkhram, Chon Buri, Trat, Prachin Buri, Suphan Buri, Kanchanaburi and Phetchaburi.

The North had nine more fatalities – five in Chiang Mai, two in Tak and one each in Sukhothai and Uttaradit.

The South reported three deaths – one each in Nakhon Si Thammarat, Surat Thani and Phuket. 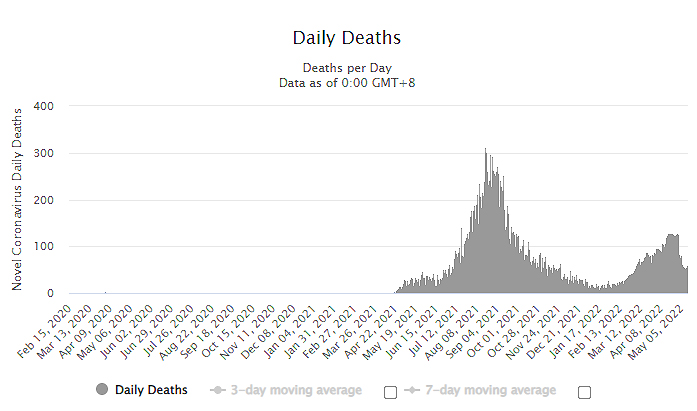 The new infections announced on Saturday comprised 6,721 in the general population, 13 among prison inmates and two in arrivals from other countries.

Of the new infections in the general population, 6,702 were confirmed at hospitals and 19 via mass testing. The two imported cases were from Israel and India.

Vaccinations continued to progress, with 135.52 million doses administered as of Friday.  81.2% of the population have now received at one dose of the vaccine, 74.7% have received two shots and 38.9% a booster dose, according to the CCSA.

The accumulated death toll stood at 29,421 since the beginning of the pandemic, including 7,723 so far this year.