This compared with 6,094 new cases and 51 coronavirus-related fatalities reported on Sunday morning.

The new figures did not include 3,445 positive results from antigen tests over the past 24 hours. This would raise the total to 8,683.

As of Sunday, a total of 66,805 people were receiving Covid-19 treatment, including 24,877 in hospitals. The remainder included 10,822 in field hospitals or hospitel facilities and 30,722 in home or community isolation while 384 others were not specified, according to the daily update posted by the Department of Disease Control.

Of those in hospital, 1,271 were seriously ill patients with lung inflammation and 613 were dependent on ventilators, the Centre for Covid-19 Situation Administration (CCSA) reported on Monday afternoon.

Of the seriously ill patients, Bangkok had the most cases at 126, followed by 82 in Nakhon Ratchasima, 61 in Ubon Ratchathani, 54 in Udon Thani and 53 in Suphan Buri.

Bangkok logged two new deaths and there were three in Samut Prakan province.

Other provinces in the Central Plains had 12 deaths — two each in Prachuap Khiri Khan and Chon Buri and one each in Rayong, Sa Kaeo, Nakhon Nayok, Uthai Thani, Ang Thong, Kanchanaburi, Suphan Buri and Phetchaburi.

The North reported four deaths — two in Chiang Mai and one each in Chiang Rai and Lamphun.

The Northeast saw 19 new fatalities — six in Udon Thani, three in Si Sa Ket, two each in Ubon Ratchathani, Nong Khai and Sakon Nakhon and one each in Nakhon Ratchasima, Loei, Nong Bua Lamphu and Surin. 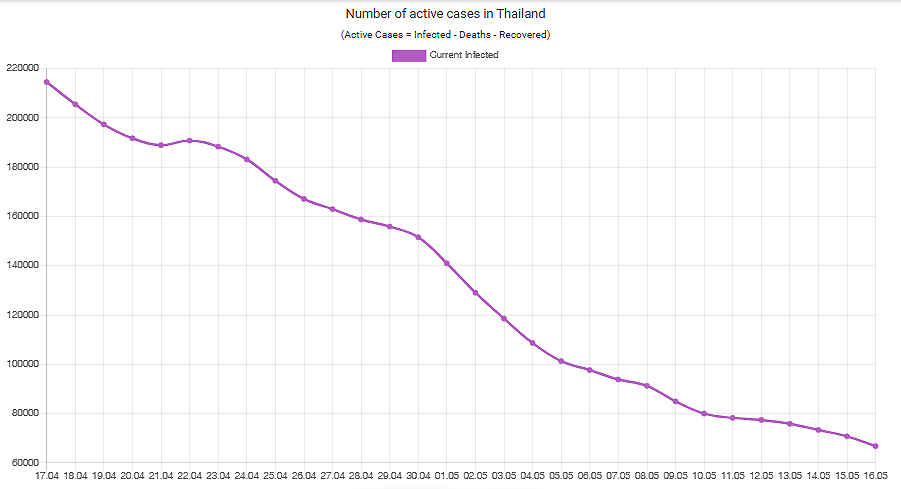 The new infections announced on Monday comprised 5,233 in the general population, three among prison inmates and two in arrivals from other countries.

The two imported cases came from South Korea and Australia.

On Sunday, 9,168 patients were discharged from hospitals after recovering.

Vaccinations continued to progress, with 135.67 million doses administered as of Sunday. The government said 81.3% of the population has now received at least one dose of the vaccine, 74.7% at least two shots and 39.1% at least one booster shot.

The accumulated death toll stood at 29,512 since the beginning of the pandemic, including 7,814 so far this year. 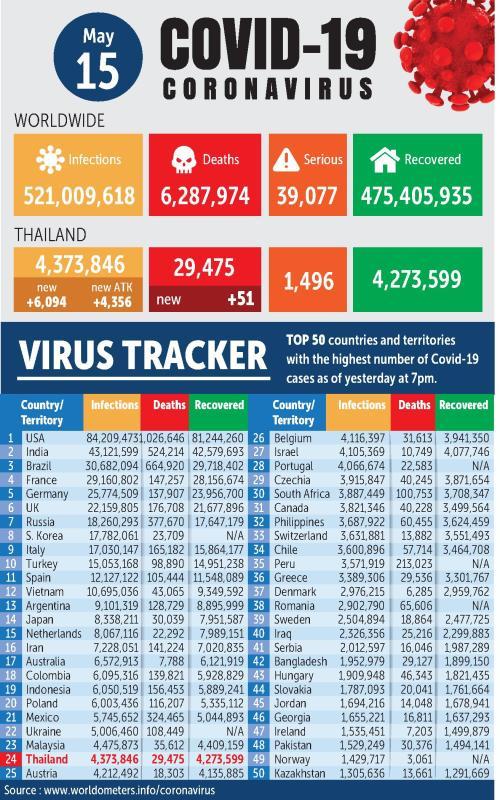