Pol Lt Gen Ekachai Siri, an inspector of Phuket Tourist Police, said Barbara Elisabeth Monika Glag Lange was discovered about 11.30am in Sirinat National Park, after a search conducted by navy, police and national park officials together with Thalang residents.

Ms Lange had been reported missing from Maikhao Palm Beach Resort since May 9 after arriving on May 3 for a vacation with her family.

Before the incident, she also disappeared from the hotel on May 5, but police found her and brought her back the same day. She was suspected of suffering from Alzheimer’s disease.

The latest search for her involved flights along the coast, reviews of surveillance camera footage, boat searches off the shore of Nai Yang Beach and inspections of communities.

She was taken to Thalang Hospital and is receiving medical attention. Initial reports stated that she is in a safe condition. 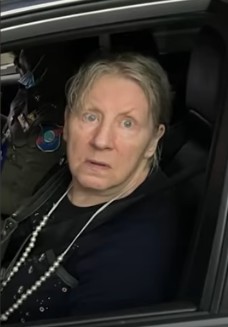 Barbara Lange looks out from a police car after being found on May 5 after disappearing from her hotel in Thalang district. She went missing again on May 9.