Flames engulf the No.552 bus in front of a shopping mall on Ngam Wong Wan Road in Nonthaburi on Mondaynight. (Capture from a clip by @fm91trafficpro twitter)

The Bangkok Mass Transit Authority (BMTA)  said on Tuesday an inspection of the fire gutted bus found that a brake system failure caused the brakes to stick and overheat.

The company responsible for bus maintenance and repairs, Cho Thavee Plc, had been asked to solve the problem.

The firm said it changed brake pads every 60,000 kilometres. As it was now the rainy season, many areas were flooded. When the brake discs were exposed to water, rust formed in the discs, causing the brake system to stick.

BMTA had asked Cho Thavee  to increase the frequency of inspection of engine systems and accessories, the electrical system and brake system, including changing brake pads before the rainy season started. This should prevent a recurrence of the incident, the BMTA statement said.

Passengers fled as the air-conditioned, gas-fuelled bus burst into flames on Ngam Wong Wan Road in Nonthaburi about 8.30pm on Monday. One person received burns to her arm.

The bus, on the Rangsit-Victory Monument route, caught fire in front of Pantip Plaza mall on Ngam Wong Wan Road as it was heading to Phong Phet intersection in Muang district of Nonthaburi around 8.30pm.

Fire trucks and crews, police and rescuers rushed to the scene.

It took firefighters about 30 minutes to bring the blaze under control. By then, the bus was gutted. Nine natural gas fuel tanks were found on the roof of the bus. (continues below) 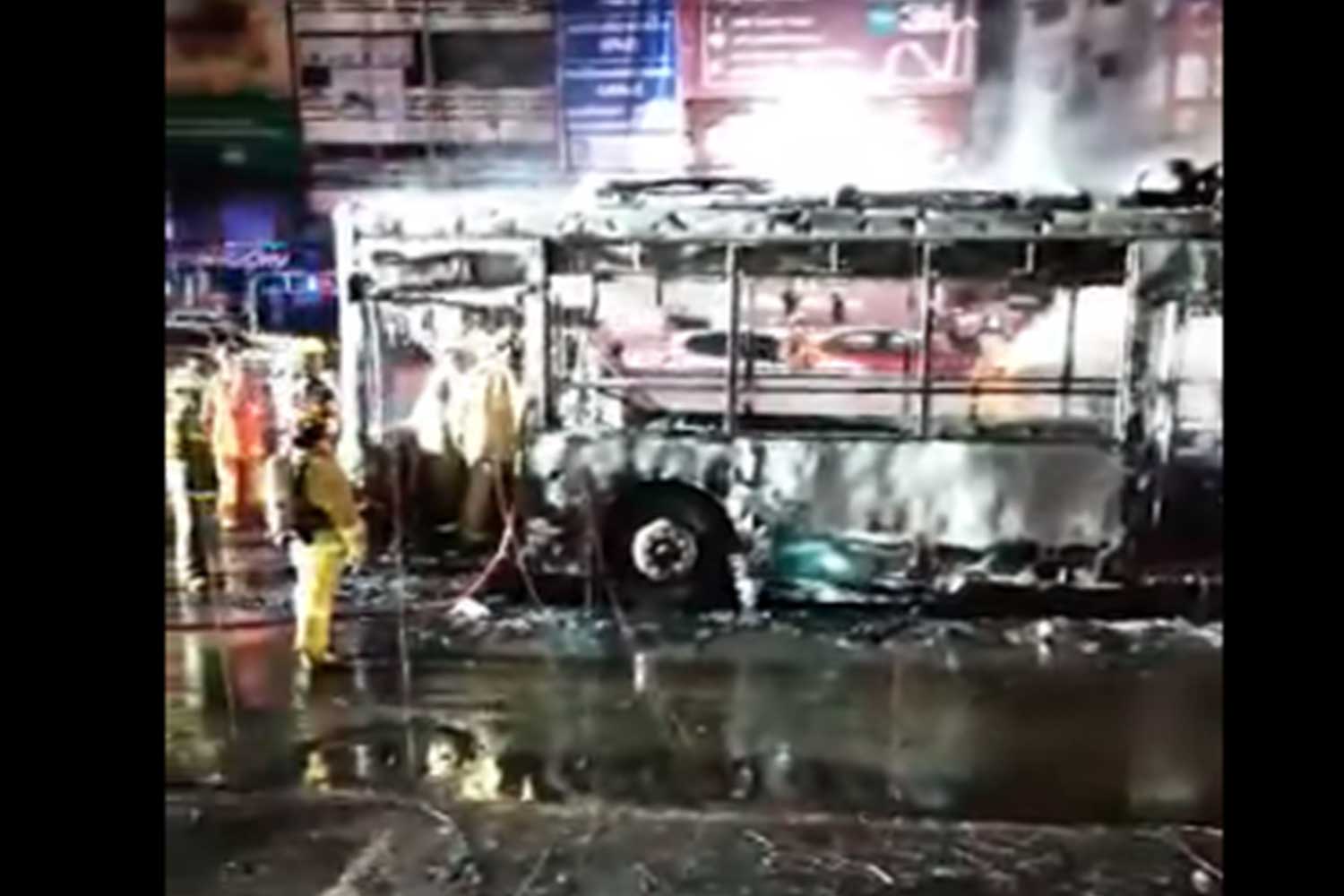 The rear of the No.522 bus is engulfed in fl;ames. (Captured from clip by Fm91 Trafficpro Facebook)

One woman passenger was injured, receiving burns on her left arm. She was taken to Paolo Hospital, reports said.

The fire also damaged about 50 metres of adjacent electric and communication wires.

Bus driver Amnart Wanyusob, 47, said that as he approached the bus stop in front of the shopping mall he heard a loud bang coming from near the rear right wheel. He stopped and told passengers to leave the vehicle. He saw that a fire had started.

Mr Amnart said he used a fire extinguisher to try and douse the flames, but they continued to spread quickly.

Bus conductor Natcha Phannut, 54, said there were about 30 passengers on the bus at the time. She ushered them all off the bus and called 191 police and the fire brigade.

The bus was fuelled by compressed natural gas, sold as NGV.