A monk is wrapping the ashes of those killed by Covid-19 at Wat Chin Wararam Worawihan in Muang district, Pathum Thani, in July last year when more crematoriums were constructed at the Buddhist temple to handle Covid-related fatalities. (Photo: Apichart Jinakul)

The accumulated coronavirus death toll passed 30,000 but the country logged just 21 Covid-19 fatalities during the previous 24 hours, down from 26 on Sunday and the fewest since Feb 10, the government said on Tuesday.

According to the Centre for Covid-19 Situation Administration (CCSA), the 21 people who died were aged from five months to 96 years.

Bangkok logged two new deaths and there was a new fatality in the adjacent province of Nakhon Pathom.

Other central plains provinces further from the capital had no new deaths.

The North reported two deaths in Chiang Mai and Phayao.

The Northeast saw 15 new fatalities - four in Yasothon, three in Ubon Ratchathani, two each in Nakhon Ratchasima and Khon Kaen and one each in Chaiyaphum, Udon Thani, Si Sa Ket and Kalasin.

The South had one new death in Surat Thani.All but one of the new infections were transmitted inside the country. 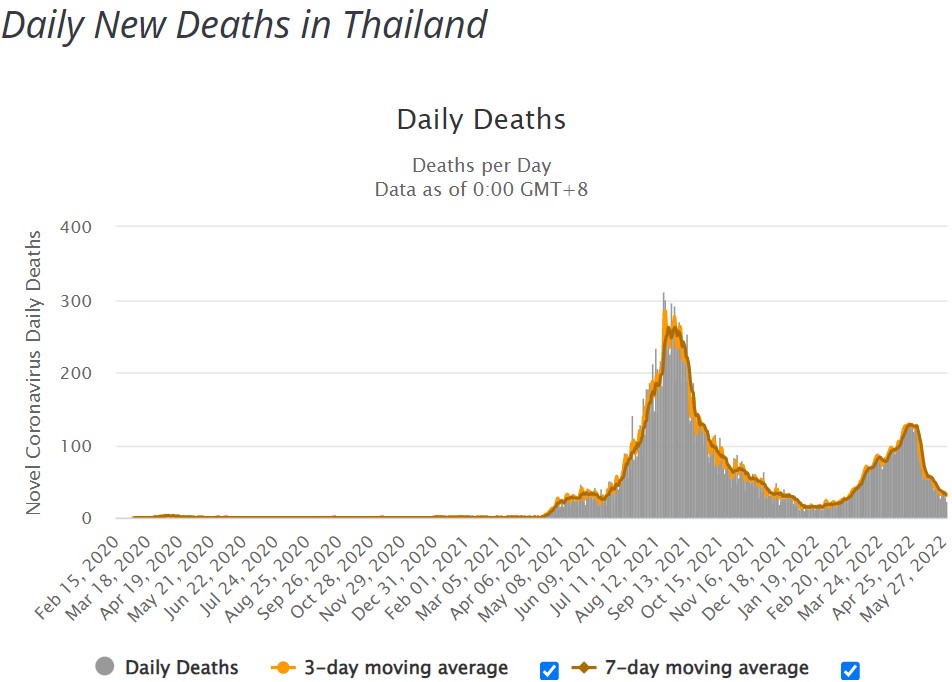 Of those in hospital, 880 were seriously ill patients with lung inflammation (down from 882) and 435 dependent on ventilators (up from 425).

Of the seriously ill patients, Bangkok had the most cases at 94, followed by 49 in Udon Thani, 37 in Nakhon Ratchasima, 33 in Samut Prakan and 30 in Ubon Ratchathani.

Among 3,955 new cases over the past 24 hours, there were 3,954 cases in the general population, none among prison inmates and one imported case from Japan.

Of the new infections in the general population, 3,950 were confirmed at hospitals and four via mass testing.

The accumulated death toll stood at 30,019 since the beginning of the pandemic, including 8,321 so far this year.