Police investigators on Thursday re-examine the shallow grave where the body of a 40-year-old man was found in Hat Yai district of Songkhla on Wednesday morning. (Photo: Assawin Pakkawan)

SONGKHLA: Nineteen illegal Myanmar migrants and two Thais arrested in Hat Yai district on Wednesday night were being questioned about the murder of a man whose bound and gagged body was found in a shallow grave beside a golf course earlier that day.

Police investigators focused on the group, who had been hiding in a nearby forested area not far from the  border.

The victim was gathering forest products when he was killed. Police suspect he saw the illegal job seekers, who were headed for Malaysia, a police source said.

The body of  Maddol Binson, 40, employee of a tree trimming firm contracted by the Provincial Electricity Authority in Na Mom district of Songkhla, was found in a fresh, shallow grave near Khlong Pom village in tambon Ban Phru in Hat Yai district on Wednesday morning.

He was gagged and his hands tied behind his back and his feet also bound together, with creepers. He had been bludgeoned on the head. His motorcycle was found in a pond about 300 metres from the shallow grave. There were signs of fighting near the spot.

Police investigating the case examined recordings from surveillance cameras in the area.

On Wednesday night, police and local officials chased a suspect pickup truck with Songkhla licence plates. The driver lost control and it hit a tree at Khlong Pom village, about 7 kilometres from where the grave was found.

The vehicle was carrying 19 illegal Myanmar migrants who had been hiding in nearby forest, according to media reports.

The driver and his companion and the 19 illegal migrants were arrested. They are now being investigated for possible involvement in Maddol's murder. DNA samples taken were taken from all of them.

Investigators from Provincial Police Region 9 and Thung Lung police station on Thursday went to the area where the body was found, to search for further evidence. 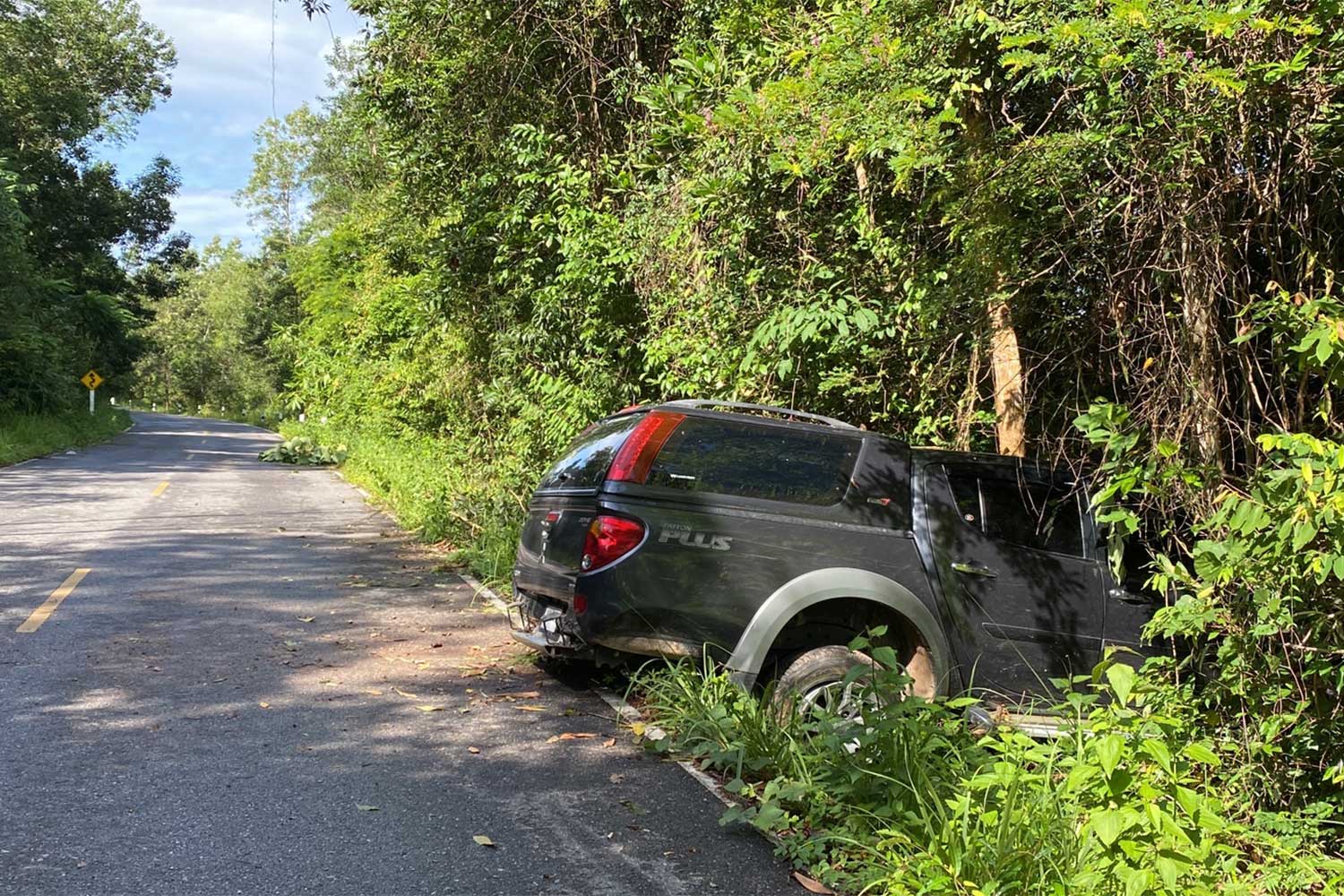 The pickup truck that ran off the road while being pursued on Wednesday night. The driver and his companion and 19 illegal migrants from Myanmar are now being investigated for possible involvement in the murder of a man whose body was found nearby in a shallow grave on Wednesday morning, in Hat Yai district, Songkhla. (Photo: Assawin Pakkawan)