Chadchart aims to help the vulnerable

New Bangkok governor pledges to improve quality of life among the homeless, disabled

A homeless man sleeps near the foot of Memorial Bridge. (Photo: Arnun Chonmahatrakool)

Voiceless, powerless and often overlooked, the homeless and people with disabilities in Bangkok have a hard time. Many are left struggling to live in a city that is not designed for them.

However, with newly-elected Bangkok Governor Chadchart Sittipunt, there is a ray of hope for those yearning for a better life in the capital, with action plans targetting the homeless and disabled being laid out to improve their quality of life.

Sittiphol Chuprajong, head of the Mirror Foundation's homeless project, said homelessness is a big problem that rarely gets addressed. During the Covid-19 pandemic, Bangkok's homeless population increased by up to 30%, he said.

"The spike in the number of homeless is mainly because of increasing economic hardship during the Covid-19 pandemic as many people lost their jobs and other sources of income, so they do not have enough money for rent," he said. "Many end up living on the streets."

"This is a major humanitarian issue because these homeless people have limited access to public services, so they are vulnerable," he said.

Despite the authorities providing solutions for the homeless population, most policies failed to meet expectations, leaving many people fending for themselves.

Deputy Bangkok Governor Sanon Wangsrangboon said the new BMA administration is aware of the problem, so it has cooperated with stakeholders to draft policies to uplift the quality of life of Bangkok's homeless.

"Our intention is to ensure that no homeless person is left behind and that they have some way to meet their daily needs and access public services, in accordance with their rights," Mr Sanon said.

"Actually, we don't want to call this group 'homeless', so we are supporting a half-half habitation project, which gives people access to cheap housing supported by the Human Settlement Foundation," he said.

He said this project is a good beginning for helping the homeless attain better quality of life.

"We also prioritise the newly homeless -- those who recently lost their homes due to economic hardship during the pandemic -- to prevent them from becoming permanently homeless by providing support such as a job-finding service and affordable housing," he said.

"Solving homelessness in Bangkok is essential to our goal to make the capital a livable city for all." 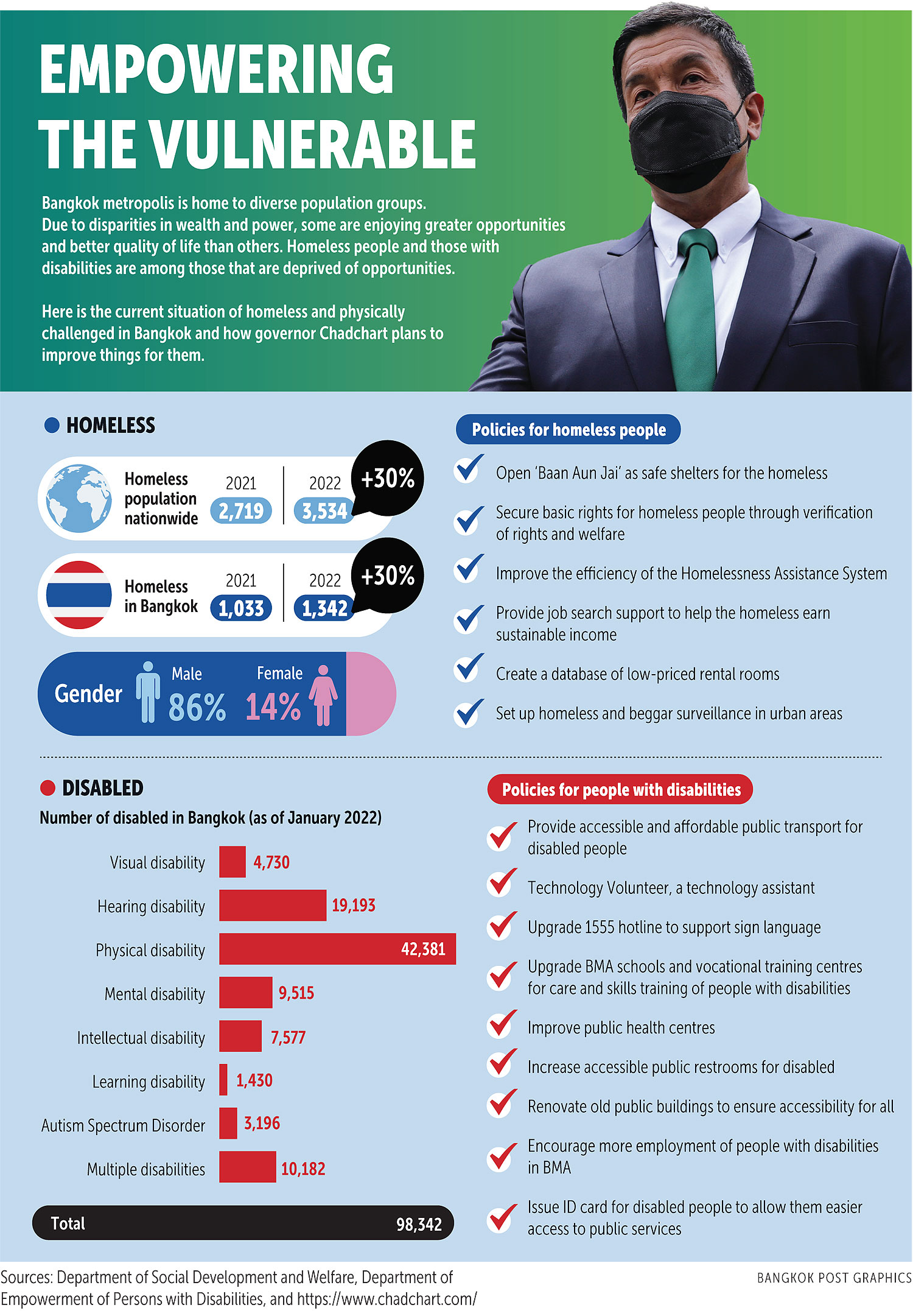 Pledges to help the disabled

Mr Chadchart has joined networks of people with disabilities in order to craft better policies for them in the capital.

On Tuesday, he chaired a meeting with the networks on how to promote their rights and interests.

The attendees included associations for the blind, deaf and those living with intellectual disabilities, and officials from the Empowerment of Persons with Disabilities Department and National Health Security Office.

The networks submitted proposals to the governor, with the aim of developing the capital for people with disabilities in many categories, including occupation, innovation, welfare, medical services and education.

The networks proposed the BMA increase the job opening rate for 800 disabled people in Bangkok in the next two years.

Disabled people who are talented at performing should be promoted, while new technology courses should be added to occupational training programmes, they said.

Meanwhile, facilities in buildings and public sites in the capital must be enhanced, and a working panel formed to ensure standards are upheld, they said.

A public hearing should be held to allow residents to determine Bangkok's development policy, such as declaring the capital an inclusive tourism destination, they said, adding the BMA should be open to receiving complaints.

The networks also asked the BMA to prepare sites to issue disability cards for Bangkok residents and establish a service centre.

More CCTV cameras should be installed and guide dogs offered in venues for safety, they said.

These proposals have gone down well with Mr Chadchart.

"The building of a metropolis will not only benefit people with disabilities but also the elderly and children," Mr Chadchart said.

"Consideration for other people is the core of the city," he said. "It cannot only rely on the BMA's strength but also the cooperation of each network to make Bangkok better."

"Disabled people can enjoy quality of life equal to other people with the support of public transport and infrastructure systems," Mr Manit said.

"Regulations facilitating disabled people have been in force since 2005 but none seem to [punish] lawmakers for failing to comply."