A child wearing a face mask gazes intently into an aquarium at SEA LIFE Bangkok Ocean World, which has reopened after two years of closure due to Covid-19, at Siam Paragon shopping complex. (Photo: Arnun Cholmahatrakul)

There were 2,263 more confirmed Covid-19 cases and 18 related fatalities on Tuesday, the Public Health Ministry reported on Wednesday.

This compared with 1,833 new cases and 19 coronavirus-related fatalities reported on Tuesday morning.

On Tuesday, 2,109 Covid-19 patients were discharged from hospitals after recovering from the coronavirus.

Tuesday’s figures released on Wednesday did not include 4,236 positive results from antigen tests over the past 24 hours. This would raise the total to 6,499.

As of  midnight Tuesday, a total of 21,581 people were receiving Covid-19 treatment, including 11,429 in hospitals. The remainder were in hospitel facilities (1,963) or in home/community isolation (8,020), according to the daily update posted by the Department of Disease Control.

Of those in hospital, 644 were seriously ill with lung inflammation and 322 dependent on ventilators.

Bangkok reported one coronavirus-related death. There were none in adjacent provinces.

Other central plains provinces further from the capital had seven deaths - one each in Nakhon Sawan, Saraburi, Chon Buri, Rayong, Ratchaburi, Phetchaburi and Prachuap Khiri Khan.

The North reported one death in Lampang.

Vaccinations continued, with 138.77 million doses administered as of Tuesday. The government said 81.8% of the population had received at least one dose of the vaccine, 76.1% at least two shots and 41.6% at least one booster shot.

The accumulated death toll stood at 30,386 since the beginning of the pandemic, including 8,688 so far this year. 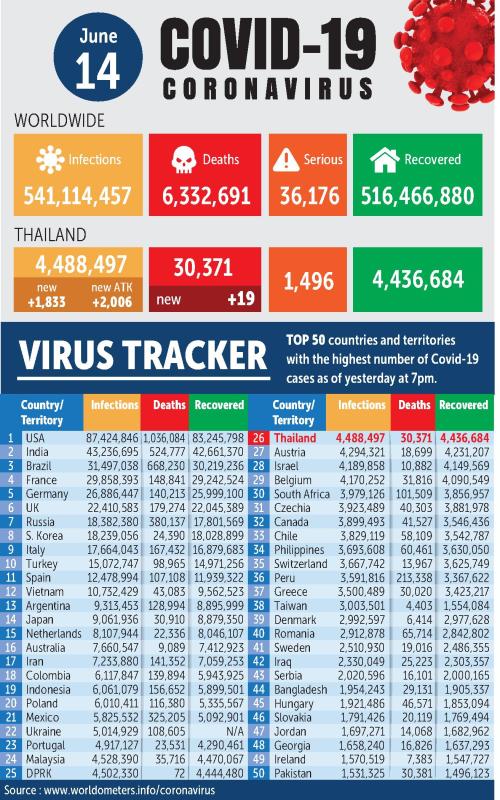