A child inspects an aquarium at SEA LIFE Bangkok Ocean World at Siam Paragon shopping complex, which reopened its doors after two years of closure due to the Covid-19 pandemic. (Photo: Arnun Chonmahatrakool)

The Covid-19 pandemic continued to subside, government data showed on Thursday, with active cases diving to 21,202, the lowest number since April 23, 2021.

The country registered 17 more Covid-19 fatalities and 2,153 new cases during the previous 24 hours, down one and 210 respectively, the Centre for Covid-19 Situation Administration (CCSA) said.

The Covid task force did not provide data on positive results from antigen tests.

Of those in hospital, 594 were seriously ill patients with lung inflammation (down from 644) and 301 dependent on ventilators (down from 322).

Among the 2,153 new cases found during the previous 24 hours, 2,133 were in the general population, 16 among prison inmates and four were new arrivals from other countries. 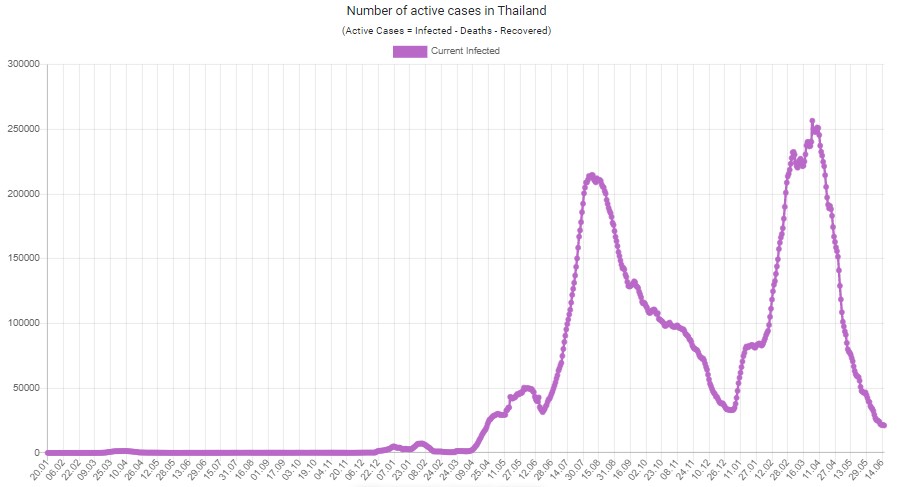 Bangkok logged one new death, with two new fatalities in the adjacent province of Samut Prakan.

Other central plains provinces further from the capital had seven new deaths - three in Nakhon Sawan and one each in Ayutthaya, Samut Songkhram, Sa Kaeo and Suphan Buri.

The North reported four deaths - two each in Lampang and Phrae.

The South had one new death in Chumphon.

The accumulated death toll stood at 30,403 since the beginning of the pandemic, including 8,705 so far this year.