This compared with the 19 coronavirus-related fatalities and 1,967 new cases reported on Friday morning.

The new case numbers did not include 3,071 positive results from antigen tests over the previous 24 hours, which would raise the total to 6,072.

The new infections announced Saturday comprised 2,264 in the general population, two among prison inmates and six in arrivals from other countries.

Of those in hospital, 593 were seriously ill with lung inflammation (down from 598) and 282 dependent on ventilators (down from 288).

The Centre for Covid-19 Situation Administration (CCSA) said the 19 people who died were aged 47 to 93 years with the average age of 77. They were 14 men and nine women, all Thais.

Bangkok reported four more coronvirus-related deaths, and there were no deaths in the adjacent provinces.

Other provinces in the Central Plains saw 13 deaths – five in Ratchaburi, two each in Lop Buri and Nakhon Nayok and one each in Trat, Rayong, Samut Songkhram and Phetchaburi.

The Northeast had four new deaths – one each in Ubon Ratchathani, Loei, Roi Et and Yasothon. 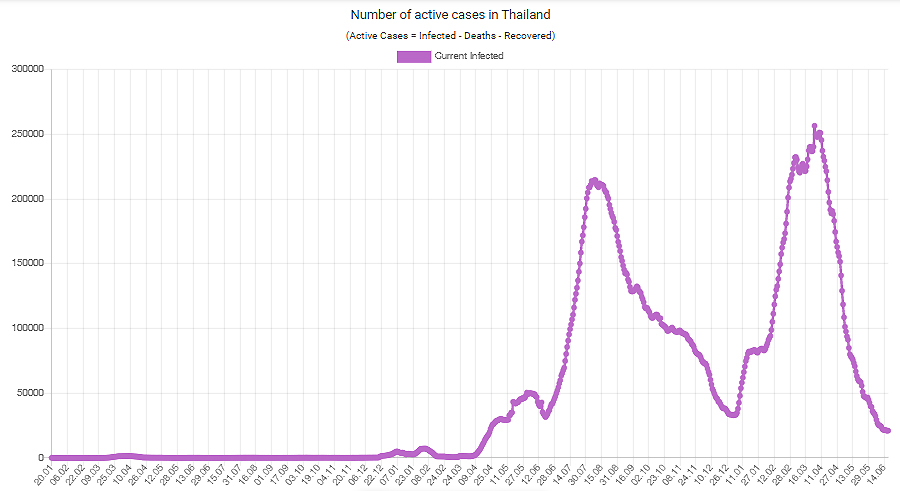 Vaccinations continued to progress, with 138.97 million doses administered as of Friday. 81.8% of the population has now received at least one dose of the vaccine, 76.2% at least two shots and 41.8% at least one booster shot.

The accumulated death toll stood at 30,445 since the beginning of the pandemic, including 8,74745 so far this year.