A vendor wears a protective mask to prevent the spread of Covid-19 at Bang Khu Lat market in Bang Yai district of Nonthaburi on June 18, 2022. (Photo: Apichart Jinakul)

This compared with 2,272 new cases and 23 coronavirus-related fatalities reported on Saturday morning.

The figures for Saturday did not include 3,499 positive results from antigen tests over the previous 24 hours. This would raise the total to 5,391.

The confirmed cases announced Sunday comprised 1,888 domestic transmissions and four imported cases. No details were given about the new arrivals who tested positive.

As of Saturday, a total of 21,311 people were receiving Covid-19 treatment, including 10,358 in hospitals. The remainder included those in hospitel facilities (1,074) and in home/community isolation (9,699), according to the daily update posted by the Department of Disease Control.

Of those in hospital, 607 were seriously ill patients with lung inflammation and 294 dependent on ventilators. 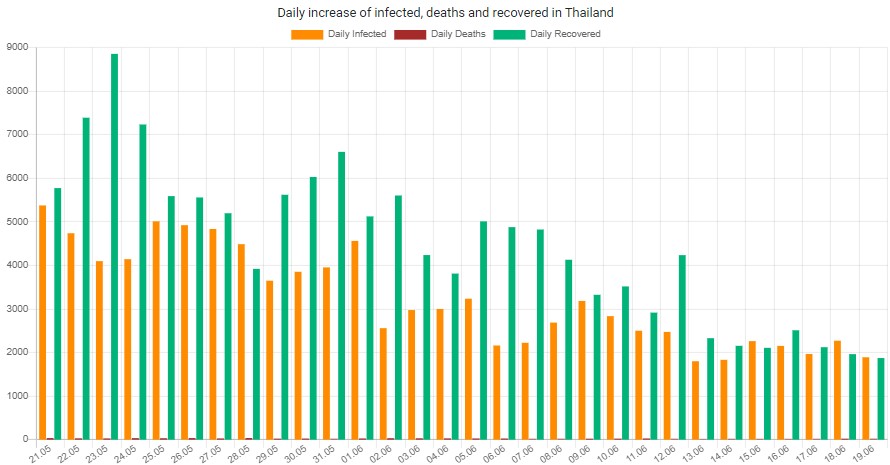 According to the Centre for Covid-19 Situation Administration, the 22 people who died ranged from 33 to 105 with an average age of 72. All were Thais.

Bangkok logged two new deaths, with one death in each of the adjacent provinces of Samut Prakan and Pathum Thani.

Other central plains provinces further from the capital had seven deaths — three in Nakhon Sawan, two in Suphan Buri, and one in each of Trat and Prachuap Khiri Khan.

The North reported three deaths, one in each of Chiang Mai, Kamphaeng Phet and Phitsanulok.

The Northeast saw seven new fatalities — three in Chaiyaphum, two in Ubon Ratchathani, and one each in Kalasin and Nakhon Ratchasima.

The South had one death in Nakhon Si Thammarat.

Vaccinations continued to progress, with 139.10 million doses administered as of Saturday. The government said 81.8% of the population has now received at least one dose of the vaccine, 76.2% at least two shots and 42.0% at least one booster shot.

The ministry said on Saturday people with chronic diseases and pregnant women were advised to avoid public transport and go abroad, despite the downgrade of the Covid-19 alert one notch to Level 2 on Friday. They should avoid night-life venues and crowded places, while international entrants who have not received a booster shot are required to take an ATK test upon arrival.

The accumulated death toll stood at 30,467 since the beginning of the pandemic, including 8,769 so far this year. 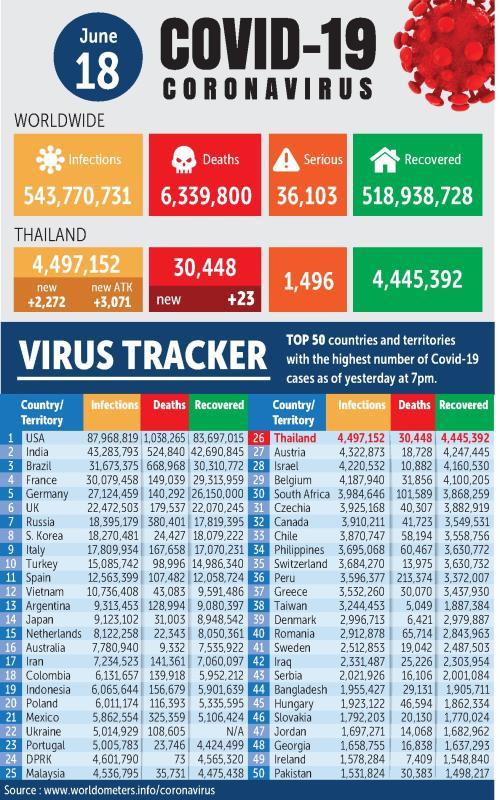