Over recent years, the government has been massively investing in large-scale water resource development projects across the country to tackle flooding and drought. However, experts warned Thailand will lose many of its unique freshwater species during the government's crusade against water issues.

As more than 48,000 new projects are scheduled for construction nationwide this fiscal year, ecological experts caution that many of them can cause serious harm to fragile river and wetland systems while endangering many endemic species that live there.

Back in September 2020, the Seub Nakhasathien Foundation led a team of academics and freshwater fish experts to the upstream reaches of the Phachi River, in the western province of Ratchaburi near the Myanmar border, to survey freshwater diversity in the area.

They were gathering biodiversity data to oppose the Royal Irrigation Department's (RID) plan to build a 1.8-billion-baht irrigation dam over the upper reaches of the river, which could inundate this pristine patch of the headwaters forest below the reservoir.

The team identified more than 30 species of fish, crabs and shrimps, 11 of which can only be found in this area, indicating that this upper area of the river has excellent water quality and healthy ecosystems.

"This was only a fraction of the biodiversity richness of the country, as Thailand is internationally regarded as one of the hotspots of freshwater biodiversity," said Nonn Panitvong, a leading biodiversity conservationist and expert on the taxonomy of freshwater fish who also joined the expedition.

Thanks to its location in a humid tropical climate zone, Thailand has the perfect geographical conditions, as the country has 22 major rivers and freshwater wetlands in areas equal to 36,616 square kilometres for aquatic species. It is estimated that 10% of the world's freshwater fish species can be found here.

More than 800 species of freshwater fish, 120 birds, 41 reptiles and 140 amphibians have been identified and observed in Thailand, according to the Office of Natural Resources and Environmental Policy and Planning (ONEP).

Mr Nonn said there are new discoveries of freshwater species every year, especially those that dwell in unexplored mountain creeks or subterranean rivers.

However, the freshwater biodiversity situation in Thailand is grim, as many development projects, which pose serious threats to aquatic lives and ecosystems, are being proposed. 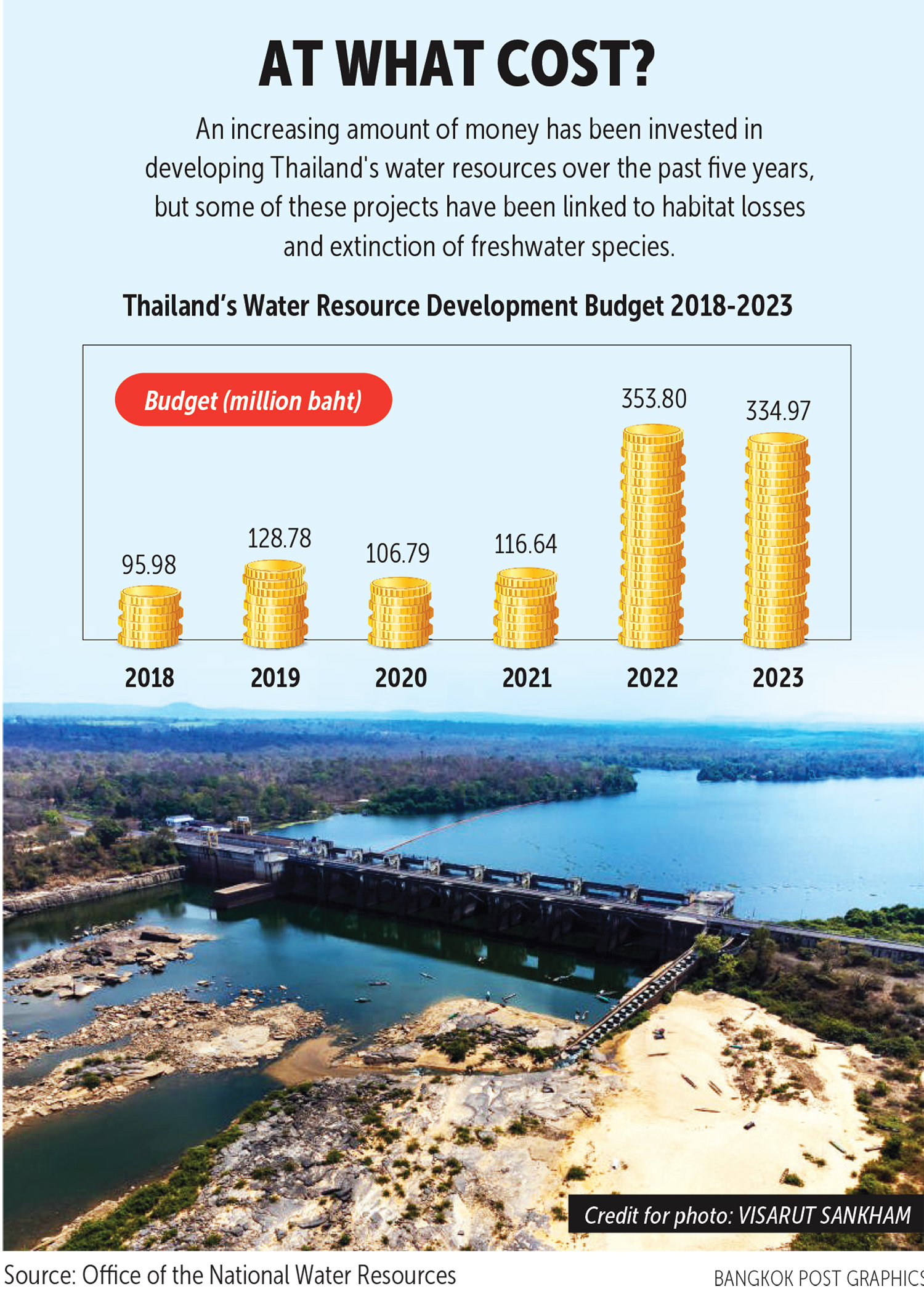 With a larger investment in water resource development under the Office of the National Water Resources (ONWR)'s 20-year water resource management masterplan, irrigation and water management projects are popping up along river basins across the country.

Analysing the water resources development budget shows the ONWR has received a large share of the government's 353 billion baht budget for managing 48,115 water projects in the 2022 fiscal year.

The total budget makes up about 11% of the government's expenses this year, which are 3.1 trillion baht.

Compared to the previous year, this year's water resources development budget has surged by 203%, while the number of projects being initiated also increased by up to 76% when compared with 27,275 projects in the 2021 fiscal year.

When taking a closer look at planned water development projects in the 2022 fiscal year, many of these projects, which include dams and water gates, could cause a severe impact on ecosystems and underwater species.

An examination of the projects listed in the water resource integration working plan for 2022 shows there are at least 44 irrigation dams, 2,267 check dams, 12 river embankments, 63 water gates, and eight river dredging projects set for construction this fiscal year.

Tatporn Kunpradid, head of Chiang Mai Rajabhat University's Center for Biodiversity Research and Implementation for Community (BRIC CMRU), said they would cause further damage to wetland and freshwater habitats, which have already been heavily disturbed by pollution and other forms of development.

He said many species rely on specific ecological conditions, so drastic ecological changes brought by water development projects can lead to population declines or even extinction.

"We understand the concerns of local people over the possible adverse impacts [of our projects] on the environment and ecosystems, but we need to balance environmental conservation with water resource management," Mr Surasee said.

As temperatures are becoming more extreme due to global warming, he said Thailand is now facing greater risks from severer floods and droughts.

"The government invests a large budget to develop water development projects to provide effective water management tools for regulating the water resource in each river basin," he said.

From next year onward, the ONWR will focus more on nature-based solutions with aim of conserving the environment, particularly in the headwaters of major rivers, Mr Surasee said.

He added that more check dams will be built in the upstream creeks and tributaries of major rivers in these forest areas, as the dams can prevent flash floods by slowing the flow of water.

They also retain water in the forests, helping prevent wildfires, he said.

"This new nature-based solution framework will allow us to better balance the environmental conservation aspect with the water resource management aspect," he said.

But Mr Nonn disputed this. He said the projects, especially check dams, are harmful to the ecosystems of headwater streams.

These streams are usually clear and fast-flowing, and the many kinds of fish and other aquatic animals that live there have adapted to unique environmental conditions, he said.

"By building check dams over these streams, they will transform the ecosystem of the streams into a stepped series of small, still reservoirs, which is opposite to the environmental conditions that the stream animals are familiar with," he said.

"As many of these species are unique and cannot be found elsewhere, they are most likely to end up going extinct."

Mr Nonn added that check dams also degrade water quality by trapping sediment and other materials which accumulate in the reservoirs and foul the water supply.

"I would like to strongly urge state agencies to reconsider the check dam projects in the protected forests, as they have no benefit," he added.