A street vendor in Klong San district sells food for as low as 10 baht per dish despite the increasing cost of fuel and ingredients in recent months. (Photo: Pornprom Satrabhaya)

The hike almost matches the estimated inflation rate of 7.1% forecast by the Ministry of Commerce, said a report pertaining to the operator's recently released analysis of food prices.

Although the average prices of made-to-order food in other provinces were still cheaper than in Bangkok and its surrounding provinces, general food prices elsewhere in the country were found to have risen much more steeply than in the capital and its environs, the report said.

Dishes made with pork as the main ingredient remained more or less consistent but chicken dishes have been soaring since late March, it said. They hit a record high in April before gradually dropping but remained highly inflated in May.

Pork dishes sold for between 64 baht and 69 baht on average in the first half of this year, beating the median cost of other meat dishes which ranged from 64 baht to 80 baht, the report found. 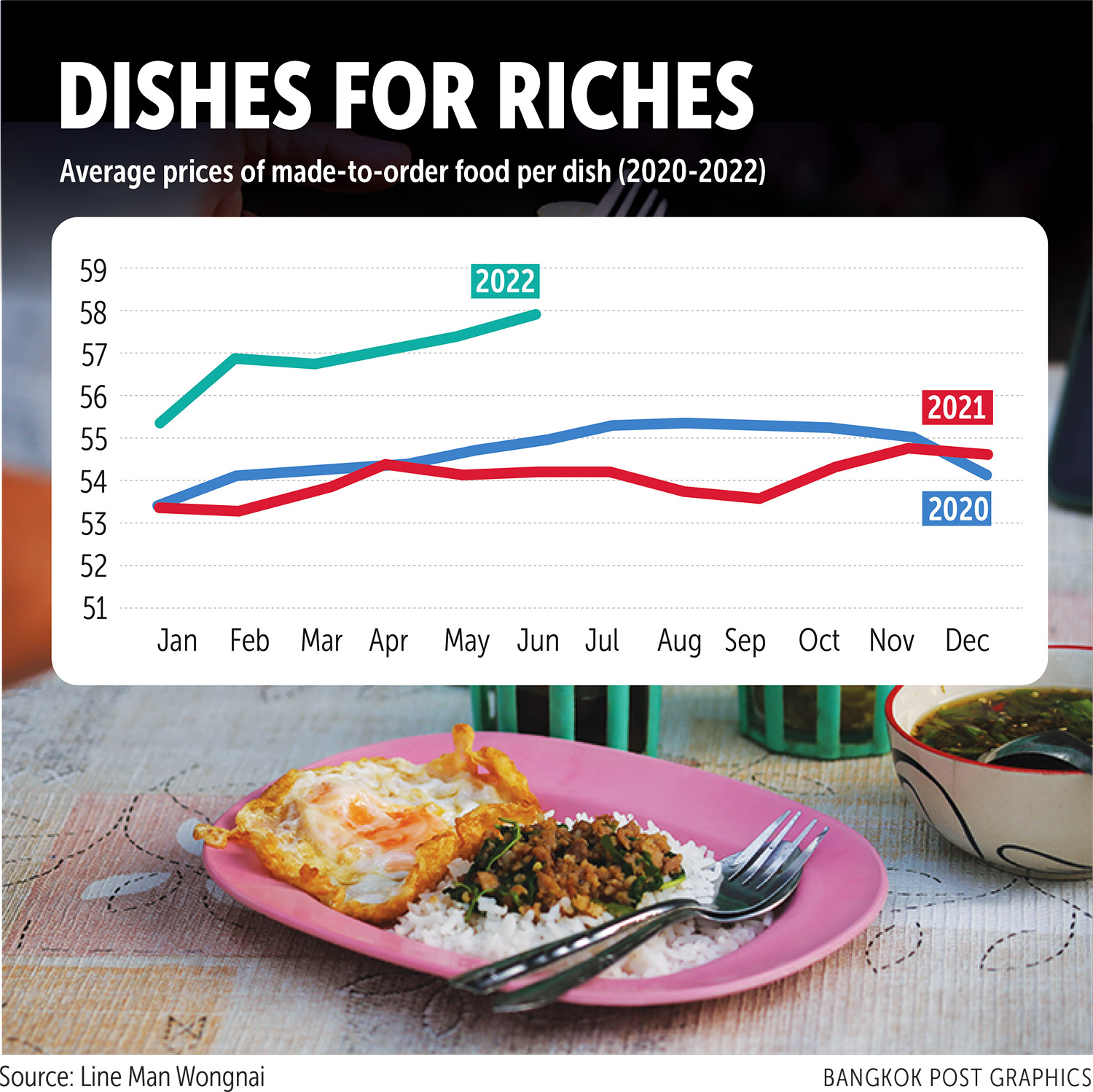 The average price of khao phat kaphrao, a popular made-to-order dish seasoned with basil and garlic, climbed 3 baht per dish from February to May to average 59 baht per dish, it said.

Isan recorded the highest prices of this much-loved dish at 62.24 baht, while western regions offered the best value at 50.08 baht. However, the prices of made-to-order food changed little last year from 2020 and were in fact slightly cheaper than overall food prices in 2020, before they spiked this year, the report said. The average cost of made-to-order dishes in January stood at 55.33 baht, up 2 baht on-year. The price jumped to 57.87 baht by May -- marking a rise of 6.7% or 3.66 baht year-on-year.

Last month, consumers in the eastern provinces had to fork out 59.96 baht per dish compared to just 49.92 baht on the other side of the country, the report said. Yet the biggest change in the price of made-to-order dishes was recorded in the Central Plains from January to June, where the price rose 3.97 baht.

The elevated prices were more dramatic last year in Bangkok and its surrounding provinces of Nonthaburi, Pathum Thani, Samut Prakan, Samut Sakhon and Nakhon Pathom, where they were 8 baht higher than the rest of the country on average as of Jan 1, 2021.

That difference had narrowed marginally to 7 baht as of this May 1. For 2021 as a whole, the average price of food in Bangkok and neighbouring provinces rose by 2.8%, compared to 5.9% elsewhere.

The situation took a turn for the worse in the first half of this year, with the corresponding price rises standing at 6.68% and 7.98%, respectively.