A window to Europe
Thailand
General

A window to Europe

Kosovo President Vjosa Osmani-Sadriu says her country is at the heart of Europe where connectivity can help business operators expand commerce in a variety of fields. (Photo: Apichit Jinakul)

Kosovo President Vjosa Osmani-Sadriu is calling on Thai businessmen and entrepreneurs to invest in her country.

She says it has strong potential for broad economic expansion and can provide a new source of investment for Thai businesses abroad.

It could also be an attractive destination for Thai tourists.

In an exclusive interview with the Bangkok Post, Ms Osmani said Thailand and her country started their relationship about a decade ago after Thailand recognised Kosovo's independence. Both countries agreed to establish diplomatic relations on Nov 22, 2013.

Kosovo later set up an embassy in Thailand, Kosovo's first in Southeast Asia.

It was the first southeastern European country to open an embassy in the region.

Kosovo, she said, sees Thailand as a strategic country to strengthen its relations with other countries in the region. Ms Osmani was in Bangkok on June 23–25 to attend the 2022 Global Summit of Women (GSW), among 650 delegates from 52 countries in attendance.

On the occasion of her visit to Thailand, Ms Osmani said she came to promote a new chapter in the Kosovo-Thailand relationship.

She also came to officially open the Kosovo embassy in Bangkok. It actually opened three years ago but owing to the pandemic, the opening ceremony was postponed. 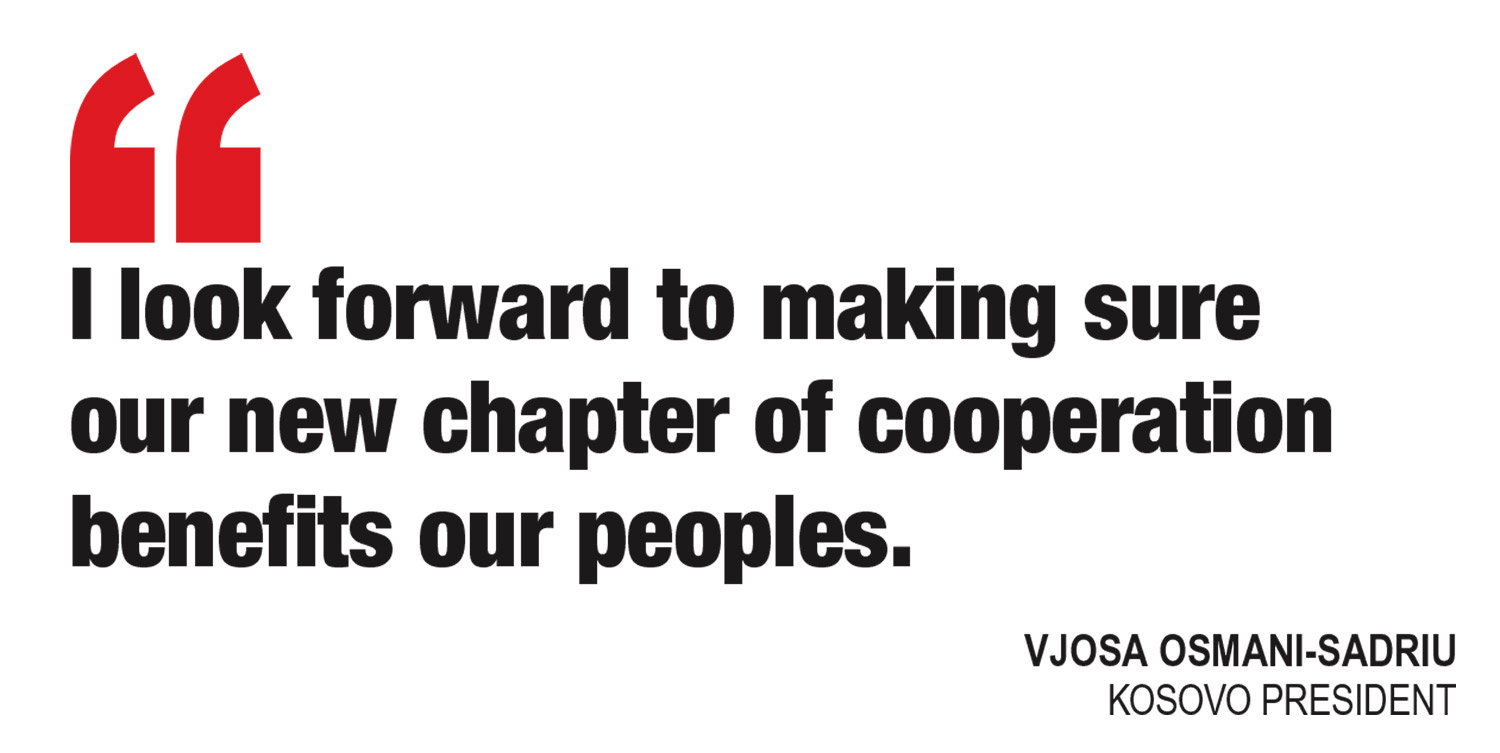 Ms Osmani also paid a courtesy call on Prime Minister Prayut Chan-o-cha who said Thailand was ready to support the Kosovo embassy and advance relations and cooperation with the country.

"This is the testament to the importance that we attach to our relationship because I believe that our people share the same values and I'm also grateful that our geographical distance should never be a hindrance to our cooperation," Ms Osmani said.

"So, I am here as a head of state visit­ing Thailand to show that we really care about this relationship and also say that I see a lot of potential to build on things further, especially when it comes to the area of trade, tourism and so on," she added.

She had attended the Kosovo-Thailand roundtable meeting, with the Diplomatic Council, Thailand Chamber of Commerce and Thailand Board of Trade.

"I look forward to making sure our new chapter of cooperation benefits our peoples," she said.

The Kosovo president thanked Thailand for standing by Kosovo's side during its darkest days. Both countries enjoyed a deeper relationship by creating people-to-people and business-to-business connections.

She also hoped Thais could get to know more about her country.

The number of Kosovars visiting Thailand had increased about 30 times in the past few years.

Removing visa obstacles between the countries would be the next step to bring both countries closer to one another. "We are discussing removing the visa regime so Kosovars can visit Thailand without obtaining visas and Thais can visit Kosovo and our region in general, in southeastern Europe, without visas.

"This would be a bilateral agreement which would lead to more cooperation and visits by Thais, who will also gain more knowledge about Kosovo and vice versa," she said.

The Kosovar Chamber of Commerce would share its experiences with the Thai equivalent to make sure the private sector forged more ties and connections.

"So, our human potential is number one because we are not just young but tech-savvy, multilingual, highly skilled and educated," she added.

Ms Osmani said labour costs in Kosovo were the lowest in the region.

"Wages and taxes are low and our country is competitive in the region. Legal support for foreign investment is secure," she said.

Kosovo is located in the heart of Europe, where connectivity can help business operators expand their business in a variety of fields -- manufacturing, production, packaging, textile, services and education, renewable energy, information and communication technology and so on.

"And of course, since we have a Free Trade Agreement with the European Union and with the western Balkans and countries beyond, Thai businesses can gain access not just to the market of Kosovo but a market of hundreds of millions of people through Kosovo.

"So, we believe we will be the next ideal business destination for investment by Thai businesses and others from this part of Asia," she said.

While economic cooperation was low at present, it could increase.

"The political will is there. The interest from businesses is there. The people are there to create connections. So, I do not see any problem in business and trade cooperation between the two countries multiplying," the Kosovo president said.