According to Mr Tanompong and Mr Sutee, the forest rehabilitation project has shown fruitful results thanks to the collaboration between the RFD, CPF and neighbouring communities. 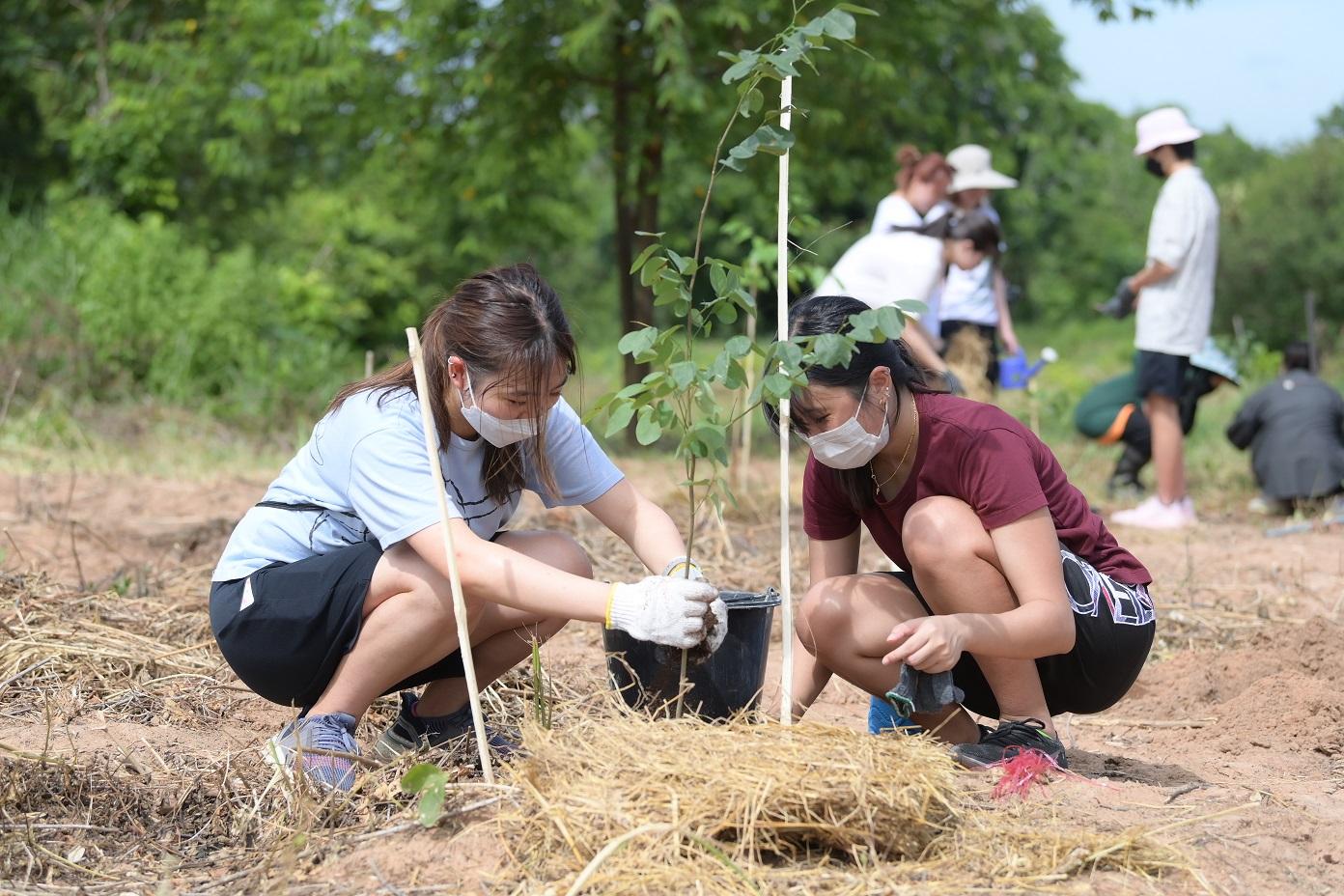 All parties have lent a hand in turning the degraded forest into a forest that boasts wide biodiversity in plants and animals.

Four innovative reforestation techniques have been applied including the creation of water and food sources for wildlife, which has attracted many animals to the area.

The project serves as a model for reforestation and conservation as well as a learning centre for the general public.

For the visit to the "nature classroom", officials from the RFD and CPF taught the international school students about tree growing techniques such as the size of holes in which to plant them.

They recommended making holes 30 centimetres wide, 30cm long and 30cm deep. The students were then split into three groups to dig holes for 200 seedlings over a 1-rai area.

The students took pride in carrying out the task as the 200 seedlings were among 4,000 donated to their school and taken care of by their peers from the Seed of Hope Club.

The seedlings were nurtured for a year to ensure their survival. All healthy specimens were then donated to the Phraya Doen Thong Mountain Project and planted to add green space and help absorb carbon dioxide in support of actions to fight climate change.

"I had so much fun and was happy to take part in forest conservation," said Sirinya "Palmy" Hirunviriya, a Grade-11 student who is president of the school's Seed of Hope Club.

"I learnt the right way to grow trees and want to invite people to grow more of them. We are haunted by global warming because of deforestation. Reforestation will help absorb CO2 and this is one of the best things to do to halt global warming," she said.

"I was happy to get out there, enjoy nature and take care of the environment," said Ramita Sriausadawutkul, a Grade 9 student who planted seven trees.

"I urge everyone to give importance to nature. People today spend a lot of time on technology but they should not neglect nature which has given us so many things. By growing a tree, we are giving nature something in return," she said.

Established by Varnnee Chea- ravanont Ross, Concordian International School aims to give its students new experiences. By joining the tree planting activity, students were expected to learn about reforestation outside the classroom, while having a good time with family members.

The activity was also expected to raise awareness about nature among youths as they are its future guardians. CPF Rak Nives at Phraya Doen Thong Mountain Project is a joint venture of the RFD, CPF and neighbouring communities.

It began in 2016 and has seen the conservation, rehabilitation and growth of trees on 6,971 rai of land, serving as a role model in forest rehabilitation for other areas in Thailand. It is a learning centre for interested organisations, public and private, as well as educational institutions.