The House committee scrutinising the 2023 budget bill will on Tuesday consider whether to accept the Royal Thai Air Force (RTAF) appeal against a House sub-committee decision to chop its purchase of two F-35A fighter jets worth 7.38 billion baht from the government's 2023 fiscal budget.

Yuttapong Charasathien, a Pheu Thai Party MP for Maha Sarakham in his capacity as deputy chairman of the sub-committee that made the ruling, on Sunday indicated the panel had not changed its mind.

The air force, meanwhile, argues that timing is critical as it wants to avoid a backlog of orders lodged by its counterparts overseas. The sooner it can proceed, the better.

He said the main reason was that Thailand has incurred huge debts following the Covid-19 pandemic, so it would not be appropriate if additional loans were sought to buy the aircraft.

Mr Yuttapong also said it will take up to 20 months for the US Congress to consider whether to approve the sale. In his view, the RTAF should wait until then before seeking funding, he said.

The air force can resubmit the request for allocations from the 2024 budget, Mr Yuttapong said.

Previously, ACM Panpakdee Pattanakul, air force chief of staff, said an appeal had been submitted to the chairman of the sub-committee. The appeal would then be forwarded to the House panel scrutinising the bill, he said. 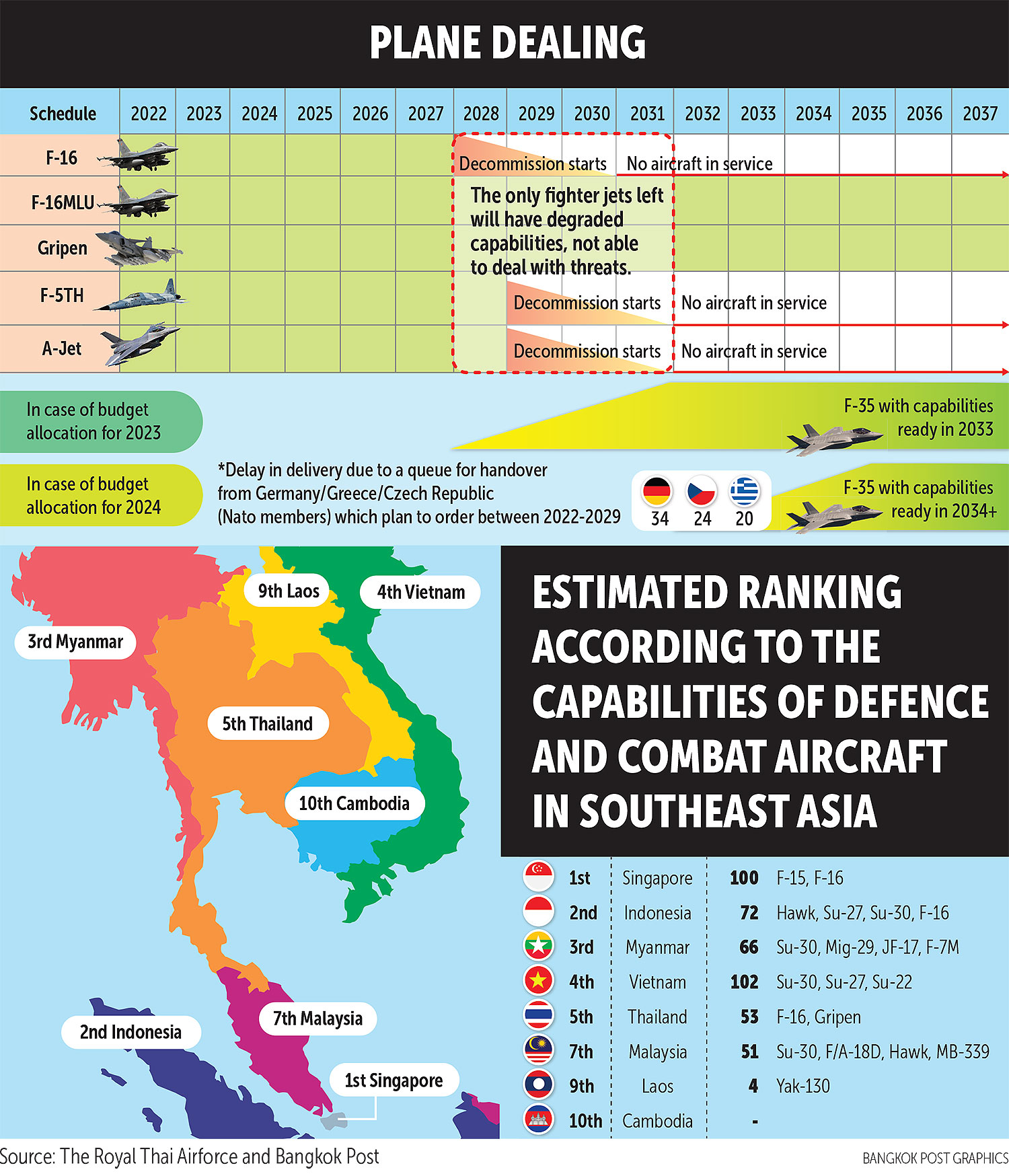 Only about 700 million baht is required from the 2023 coffers, while the rest will be carried over to later years until fiscal 2026, he said.

Although conscious of the need to revive the economy, the air force needs this initial sum to press the US into making a decision over the sale, with a quote hoped for in January next year, he said.

RTAF commander ACM Napadej Dhupatemiya said on Sunday the RTAF is only carrying out its duty under government policy on strengthening its air power in the interest of keeping the country safe from threats, he said.

The procurement plan is within the RTAF's budget, ACM Napadej said before adding: "Don't mix politics with security issues as this will not benefit the country."

AVM Prapas Sonjaidee, RTAF spokesman, said there is a plan to decommission three fleets of fighter jets gradually which would leave just two in 2032.

The air force plans to procure a new fleet to replace the three decommissioned fleets to maintain the RTAF's air combat capabilities for the next 40 years, AVM Prapas said.

The RTAF needs to know the budget approved for the procurement first before proceeding to discuss details of the purchase deal with the US.

But if the RTAF is not granted allocations from the 2023 budget, the letter of offer and acceptance (LOA) with the US for the procurement cannot be arranged, he said.

If the RTAF expresses its wish to procure F-35 fighter jets in 2024, it would have to join a growing production line waiting list which already includes Nato members Germany, Greece and Czech Republic, which plan to order the aircraft between 2022 and 2023.

If the RTAF is slow in placing an order, it would inevitably fall behind these three countries, which in turn would delay its plan to have the full fleet of F-35 jets replaced by 2034, AVM Prapas said.