The last pod of 14 Irrawaddy dolphins found recently in Songkhla Lake in Songkhla province. Experts say a conservation plan is needed to prevent them from becoming extinct. (Photo: The Department of Marine and Coastal Resources)

The last pod of 14 Irrawaddy dolphins in Songkhla Lake in southern Thailand could become extinct within eight years if a conservation plan is not implemented immediately, says the Department of Marine and Coastal Resources.

Pornsri Suthanaruk, the department's deputy chief, told the Bangkok Post the number of dolphins has been declining over the past 30 years due to the widespread use of large fishing nets, causing about 60% of the dolphin fatalities.

The department estimates the fatality rate of the Irrawaddy dolphin is three per year. However, the birth rate is unknown.

Its latest study conducted through aerial photos and an acoustic method found there are just 14 of the animals left in the region, she said.

Alarmed by the low number, Natural Resources and Environment Minister Varawut Silpa-archa has ordered the department to draft a protection and conservation plan.

This would also cover the issue of artificial breeding to boost the dolphin population and improve their genetics to be more resilient.

The Irrawaddy dolphins in Songkhla Lake are the only ones in the country living in a freshwater habitat.

With its rounded head and short snub nose, the Irrawaddy dolphin is listed by the International Union for Conservation of Nature (IUCN) as an endangered species, but those living in freshwater areas including the Mekong River, Ayeyarwady or Irrawaddy River in Myanmar, and Chilka Lake in India are considered critically endangered. 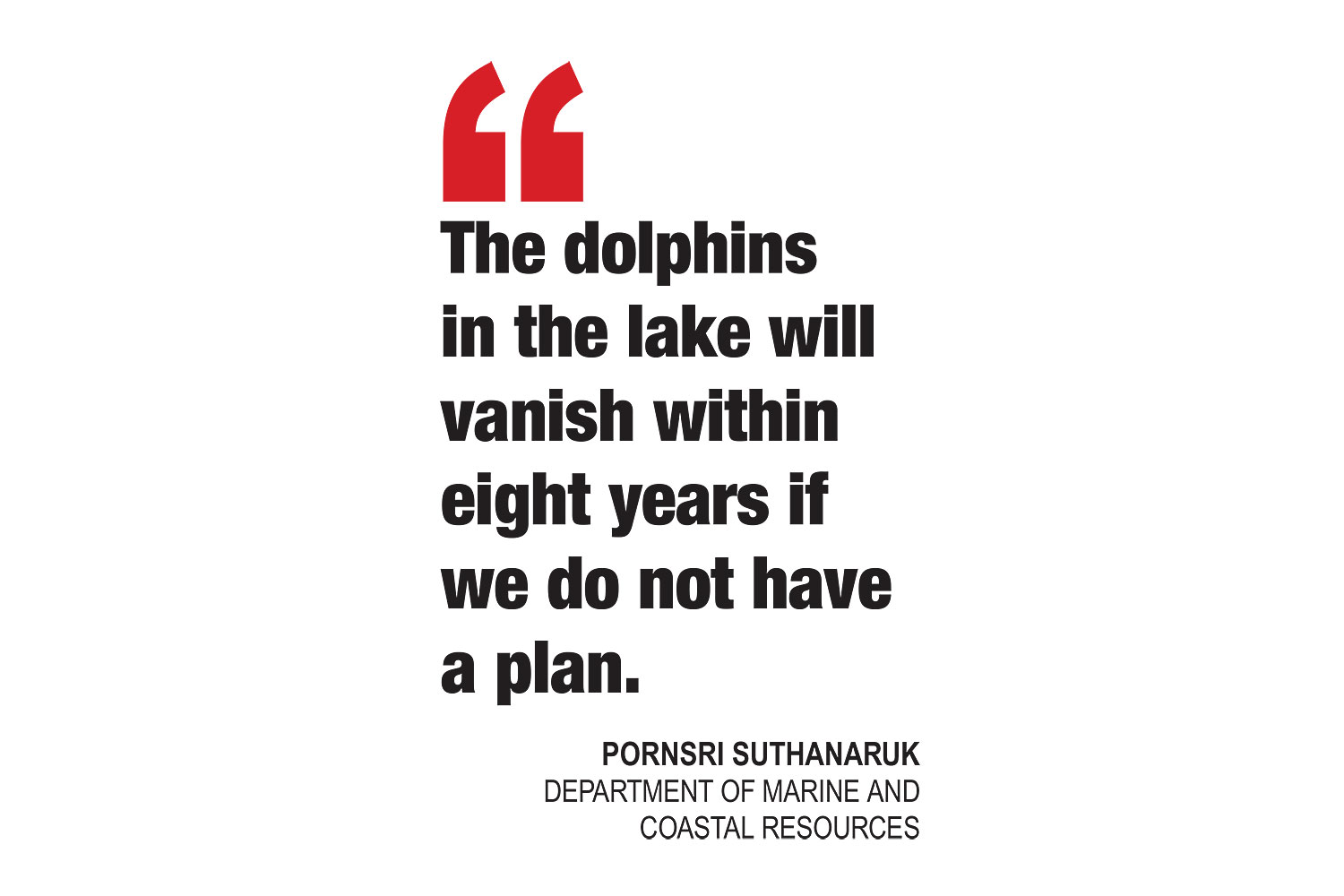 Irrawaddy dolphins can live in both freshwater and coastal areas, especially in brackish water, mangrove areas or river deltas.

The last pod of freshwater dolphins are believed to have swum from the Gulf of Thailand to Songkhla Lake in search of food. But for years the lake has experienced geographical changes that have effectively trapped the dolphins meaning they cannot return to the sea, Ms Pornsri said.

Songkhla Lake is the largest freshwater lagoon in the country. It covers an area of 1,000 square kilometres spanning 15 districts in Phatthalung, Nakhon Si Thammarat and Songkhla.

"We calculate the dolphins in the lake will vanish within eight years if we do not have a plan to protect them.

"The major threat is fishing tools. We need to eliminate this threat to help the dolphins survive," she said.

The department will study the possibility of announcing a designated area, about 100 sq km, as a protected dolphin habitat. The area may be located on the northern part of the lake, between Songkhla and Phatthalung.

The area is known among locals as Thale Luang, covering about 458 sq m and connected to the Thale Noi Non-Hunting Area in Phatthalung.

The department also needs cooperation from local fishermen to create awareness and promote knowledge of Irrawaddy dolphin conservation, she said, adding that a patrol system will be set up to prevent illegal fishing gear that can harm them.

Thon Thamrongnawasawat, deputy dean of the Faculty of Fisheries at Kasetsart University, who is also the department's team leader for its Irrawaddy dolphin recovery project, said the mission to increase the species' population in the lake is a challenge.

The conservation policy will only get the cooperation of locals when they see clear benefits from it, he said.

"It is not easy to convince fishermen to change their fishing tools to help save Irrawaddy dolphins. We can reason with them that saving the dolphins can lead to more tourism activity which would eventually benefit local people living around the lake. But if the conservation plan is not successful, relocating the dolphins is another option," Mr Thon said.

He said the reduction of their numbers is also the result of poor marine life management, with local authorities releasing alien fish species into the lake, especially giant catfish, to boost local incomes.

Meanwhile, Chalermchai Suwanarak, chief of the Department of Fisheries, said the department has been involved with Songkhla's development plan since 2003.

This focuses on increasing freshwater animal populations and controlling illegal fishing tools in the lake. It also has measures in place to protect and preserve Irrawaddy dolphins.

He said the department has worked closely with locals and has been urging them to stop using giant fishing nets.

He said the department has benefited from strong cooperation with local communities.

He also insisted it has no policy to release any more alien fish species into the lake.

"As a Songkhla native, I could say the local people have strong ties with the dolphins. They don't want to do anything to harm them," he said.

"Their declining population is a result of inbreeding because there is only one pod in the lake. We need to conduct a study to deal with the problem to ensure their long-term survival."

He said the department is ready to cooperate with the Ministry of Natural Resources and Environment to remove all fishing tools in the protected area if the Department of Marine Coastal Resources names it a protected zone for the dolphins.

The Ministry of Public Health is inviting parents to inoculate their young children in the first country-wide Covid-19 vaccination campaign for toddlers in the next two weeks.

The Ministry of Culture has instructed the Fine Arts Department to expedite an inspection in order to restore a 500-year-old pagoda at a temple in Chiang Mai which devastatingly collapsed due to heavy rain on Thursday evening.