A child receives a Covid-19 shot at Central Westgate shopping mall in Nonthaburi on Thursday. The service is for 5-11-year-olds and is available in the province from 10am to 3pm every Thursday this month. (Photo: Pattarapong Chatpattarasill).

There were 34 more Covid-19 fatalities and 2,253 new cases admitted to hospitals on Thursday, the Ministry of Public Health reported on Friday.

This compared with 29 coronavirus-related fatalities and 2,166 patients on Wednesday, as reported on Thursday.

Of those in hospitals, 911 were seriously ill patients with lung inflammation (up from 905) and 482 dependent on ventilators (up from 476).

Among 2,253 new patients over the past 24 hours, there were 2,248 cases in the general population and five among prison inmates.

The 34 people who died were aged from 33 to 95 years and included a Dutch.

Bangkok logged three new deaths and there five new fatalities in the adjacent provinces of Samut Prakan (four) and Nakhon Pathom (one).

Other central plains provinces further from the capital had 12 new deaths - two each in Ang Thong, Lop Buri, Rayong and Chachoengsao and one each in Chon Buri, Nakhon Nayok, Prachin Buri and Phetchaburi.

The North reported two deaths in Lampang and Chiang Mai.

The Northeast saw 10 new fatalities - three each in Udon Thani and Roi Et and one each in Nakhon Ratchasima, Chaiyaphum, Si Sa Ket and Sakon Nakhon.

The South had two new deaths in Surat Thani. 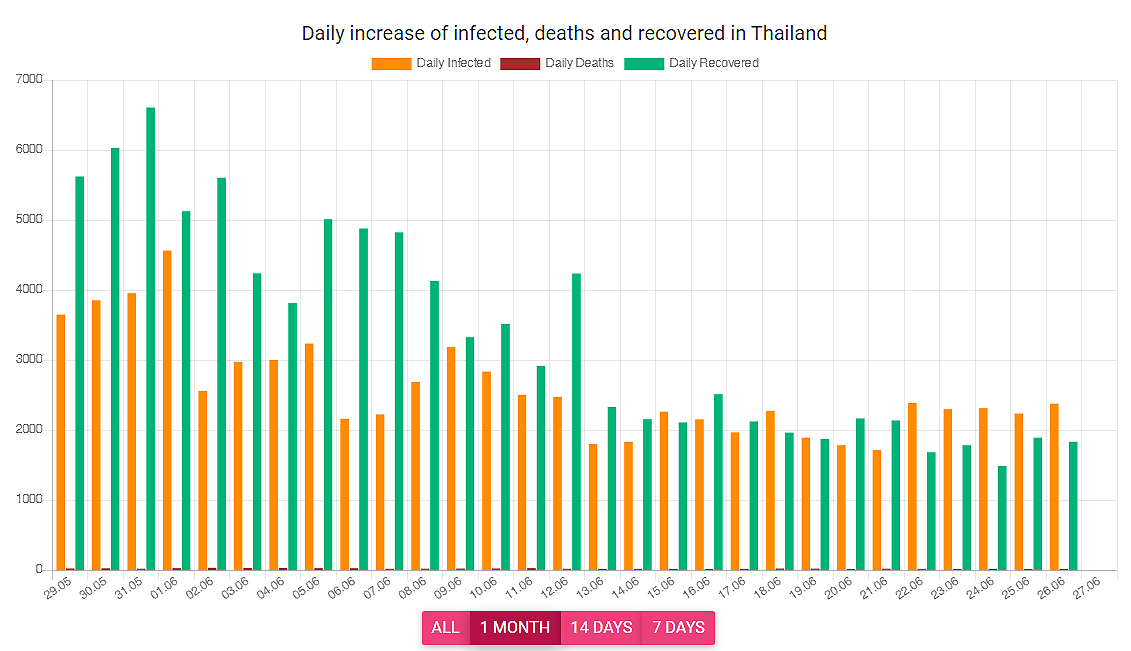 The accumulated death toll stood at 31,526 since the beginning of the pandemic, including 9,828 so far this year.