Rescue workers are inside Mountain B pub after the fire was put out in Sattahip district, Chon Buri, on Friday. (Photo: Sawang Boriboon Foundation)

Prime Minister Prayut Chan-o-cha has ordered another investigation into the Chon Buri pub fire that killed 14 people and injured 36 others after an initial probe found the establishment had been illegally altered and operated.

The inferno started at about 1am on Friday at the customer-packed Mountain B pub, according to police.

Ten men and four women died in the fire, all of them local residents, police said.

Four charred bodies were found behind the front door of the one-storey building, three in a men's restroom, one at a DJ booth and five at a cashier's booth, police said, adding another victim later died in hospital. 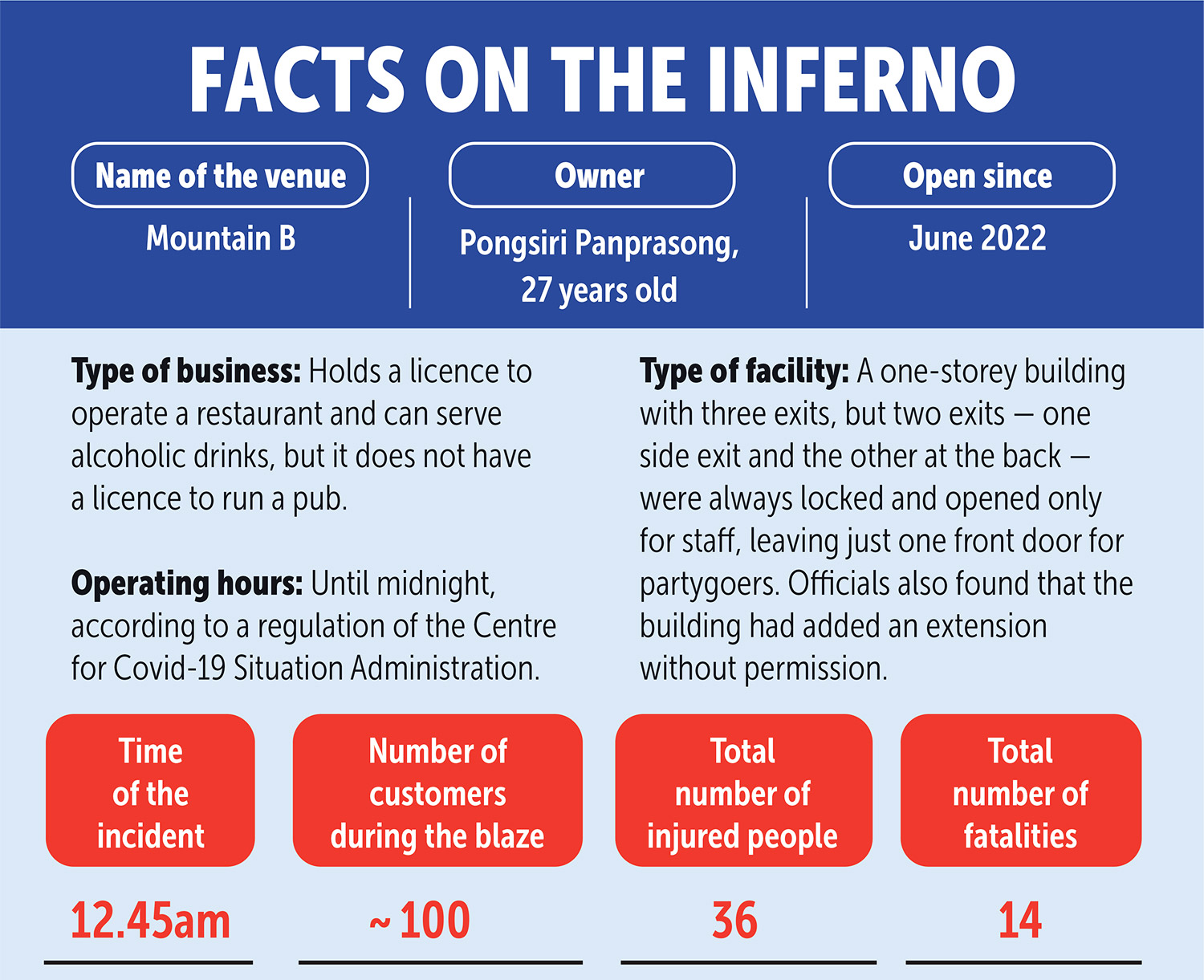 Mountain B covers an area of 3 rai along Sukhumvit Road in the province's Sattahip district.

The blaze is reminiscent of the Santika pub fire in Bangkok, which occurred during a Jan 1, 2009 New Year's Eve countdown. Sixty-six people were killed and more than 200 others were injured then.

Gen Prayut on Friday expressed sympathy for the victims of the Mountain B pub fire. He said he has instructed authorities to inspect the damage and take care of the injured and the relatives of the dead.

"Authorities have been ordered to find the cause of the incident and bring the culprit in for punishment," he said. "This incident is similar to the Santika pub fire in Bangkok."

He also stressed the need for pub operators to comply with rules and regulations governing the construction and modification of buildings.

"The Interior Ministry, provincial governors and police have also been ordered to make sure similar incidents do not occur in the future," he said.

Interior Minister Anupong Paojinda said the initial probe found Mountain B did not have a pub licence and it was built in an area where entertainment venues were prohibited. 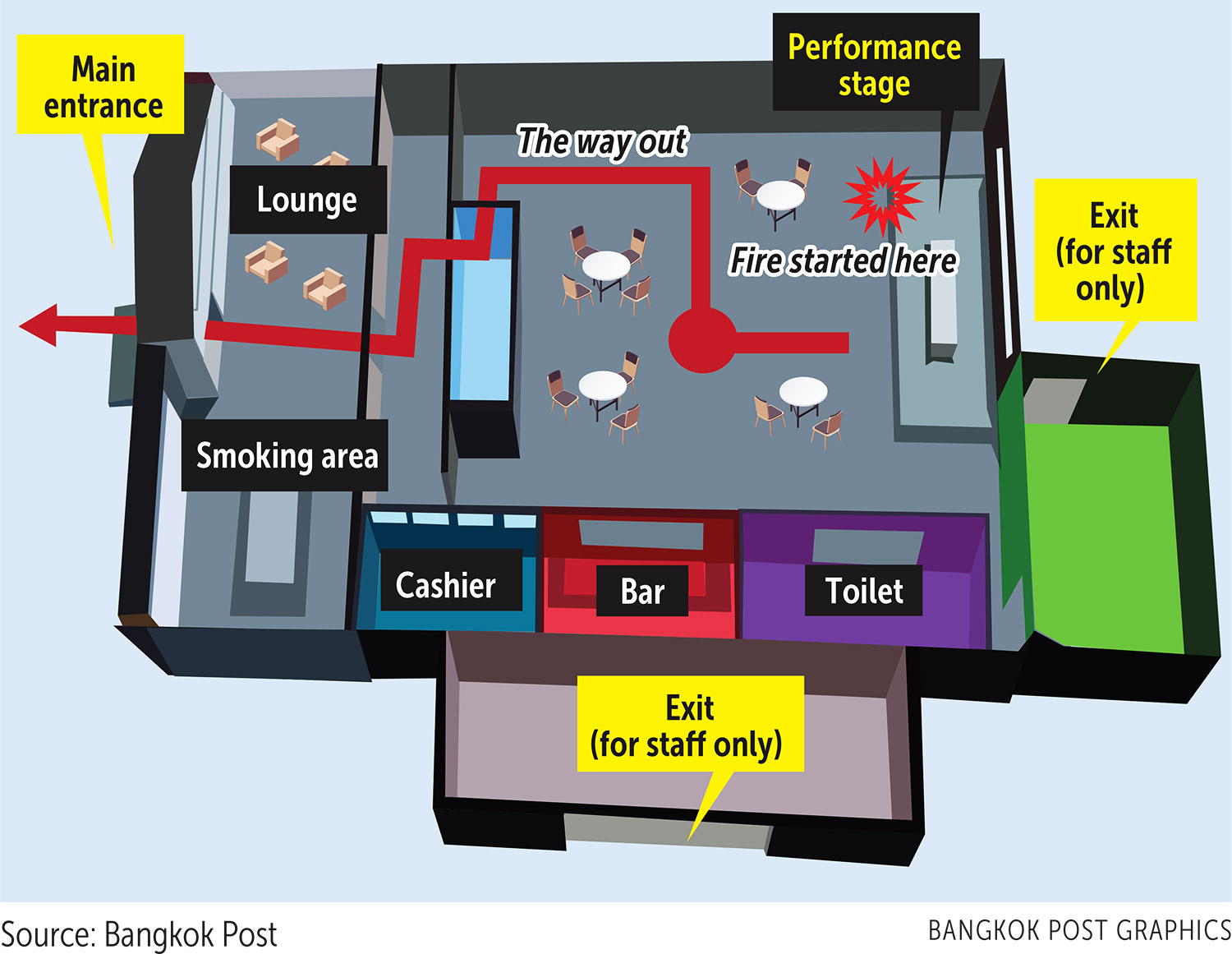 "Officials are checking the details of the building, including design, construction materials used, control systems and fire exits," he said. "I told them to find the cause of the fire and [identify] the people responsible for it."

Pol Maj Gen Atthasit Kitjahan, commander of Chon Buri police, said Mountain B was licensed to operate as an eatery but had been illegally altered and used as an entertainment place.

He said the building was almost completely destroyed -- with its interior structure, decoration, soundproofing, stage and ceiling tiles engulfed by the blaze. Investigators have questioned the staff, owner, eyewitnesses and an electrician recently hired to repair the building's power system, he said.

Pol Maj Gen Chaipoj Suwanrak, deputy commander of the Provincial Police Region 2, said another probe found that no circuit breaker was installed in the pub and there were only two fire extinguishers -- which was disproportionate to the pub's space.

Pongsiri Panprasong, the 27-year-old pub owner, said it opened about two months ago and he submitted a request to operate as a pub on June 13.

Bangkok governor Chadchart Sittipunt on Friday said he had instructed city officials to step up the inspection of nightlife outlets across the capital as a precautionary measure amid tourists returning to visit.