There were 35 more Covid-19 fatalities and 2,381 new cases admitted to hospitals on Friday, the Ministry of Public Health reported on Saturday.

This compared with 34 coronavirus-related fatalities and 2,253 patients on Thursday, as reported on Friday.

Of those in hospitals, 910 were seriously ill patients with lung inflammation (down from 911) and 471 dependent on ventilators (down from 482).

Among 2,381 new patients over the past 24 hours, there were 2,377 cases in the general population and four among prison inmates.

According to the Centre for Covid-19 Situation Administration (CCSA), the 35 new deaths were aged from one to 94 years old. There were 21 men and 14 women, all Thais.

Bangkok saw six new fatalities, and there were six more deaths in the adjacent provinces of Pathum Thani (three), Samut Prakan (two) and Nonthaburi (one).

Other provinces in the Central Plains had 13 deaths – two each in Chon Buri, Rayong, Chachoengsao and Phetchaburi and one each in Nakhon Sawan, Lop Buri, Samut Songkhram, Ayutthaya and Saraburi.

The Northeast reported eight deaths – three each in Maha Sarakham and Nakhon Ratchasima and one each in Nong Bua Lam Phu and Kalasin. 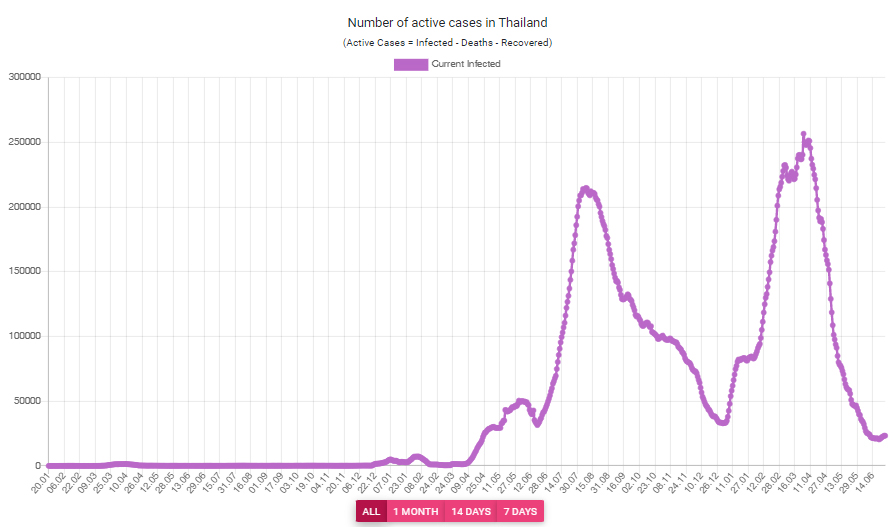 Vaccinations continued to progress, with 141.81 million doses administered as of Saturday.

The CCSA reported that 82.2% of the population have now received at least one dose of the vaccine, 77.0% at least two shots and 44.7% at least one booster shot.

The accumulated death toll stood at 31,561 since the beginning of the pandemic, including 9,863 so far this year.