‘Captain Condom’ turned the tide in war on Aids, overpopulation

Mechai Viravaidya, known as Captain Condom, looks on next to a condom table decoration. (File photo)

Mechai Viravaidya twice saw Thailand in desperate trouble — first from a ruinous population explosion and then from the Aids epidemic — and he responded to both crises the same way: with condoms and his own considerable charisma.

Birth control was something Thais neither talked about nor very much practiced in the early 1970s, when the country’s population was growing at an unsustainable pace and the average family had seven children.

So Mechai decided to tackle the subject that no one else would touch, spearheading a nationwide campaign to publicise and demystify contraceptives.

“It wasn’t a job for intelligent people, smart people, respectable people, aristocratic people,” he said in a June interview.

Mechai, now 81, is in fact all of these, the foreign-educated son of two doctors, the husband of a former private secretary to the king and, over the years, a government minister, organisational leader and senator.

But he is also uninhibited, unpretentious and always willing to put on a show to persuade people.

His goal with the family-planning campaign, he said, was to make condoms just one more item shoppers picked up in the market, along with soap, toothpaste and dried fish. To pull that off, he knew it would help to lend condoms positive associations, something that made people smile.

“If I can accomplish that by blowing up condoms or filling them with water,” he said, “then fine, I’ll do it.” 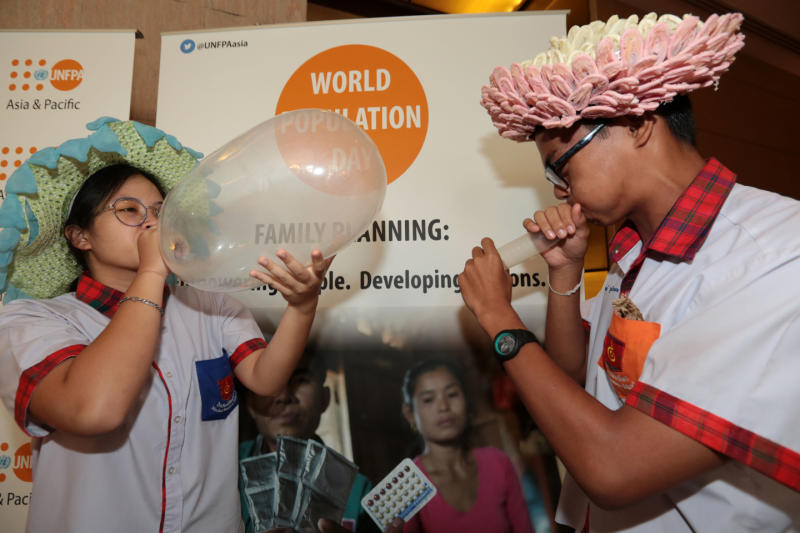 School students blow up condoms to promote the use condoms to prevent sexually transmitted diseases at a UN Population Fund event in Bangkok on July 11, 2017. (File photo: Chanat Katanyu)

Mechai was speaking not far from the Bangkok offices of the Population and Community Development Association, the organisation he founded nearly 50 years ago to fight poverty in Thailand, with family planning a linchpin.

He toured the country, village to village, with an endless array of gimmicks and publicity stunts that linked condoms with fun. Filling them up with water past the point of breaking was a staple performance.

“Who can blow up the biggest condom?” he would call out to the crowds. “Who can make it burst!”

He opened what he called family-planning “supermarkets” at bus stations to distribute contraceptives and persuaded Buddhist monks to bless condoms, distributing videos of the ceremonies. To educate younger Thais, he produced a safe-sex English alphabet that included letters like B for birth control, C for condom and V for vasectomy.

In addition to the spectacle, the campaign had serious infrastructure behind it. He mobilised and trained a network of 350,000 teachers and 12,000 village community leaders.

And he did not limit his family-planning efforts only to condoms. In Bangkok, he offered mass free vasectomies on a parade ground near the palace to celebrate the king’s birthday.

Some found his methods offensive, or at least insufficiently decorous. A newspaper columnist, trying to formulate an insult, suggested that people start calling condoms “mechais.”

The idea caught on, and Mechai framed a copy of the article to hang on his wall.

It all added up to more publicity, the main weapon in his arsenal, and the results of his campaign were dramatic. Thailand’s population growth rate fell from more than 3% in 1974 to 0.6% in 2005, and the average number of children per family shrank from seven to fewer than two.

The World Bank called Mechai’s campaign “one of the most successful and effective family planning programs in the world.”

In 1970, both Thailand and the Philippines had equivalent populations of 36 million.

“Now we have about 70 million, and they have 107 million,” Mechai said in the interview, actually understating the Philippines population, which is more than 110 million. He added that if Thailand had not addressed its population issue, it too would be sending millions of its citizens abroad to find work.

“If we hadn’t stepped in, it would have been to the deep detriment of the economy of Thailand and the quality of life,” he said.

When the Aids pandemic began to overwhelm Thailand in the late 1980s, Mechai employed the same knack for publicity, persuasiveness and showmanship in combating the disease.

As with his first condom campaign, he initially struck out on his own, as the government refused to back a safe-sex campaign, fearing it would hurt the lucrative sex-tourism industry.

So Mechai turned instead to the military, a powerful institution beyond the reach of civilian government, which agreed to air regular safe-sex announcements on its 300 radio stations and five television stations.

Then in 1991, a new prime minister, Anand Panyarachun, embraced Aids prevention, making Mechai his minister of information and tourism. Every government ministry was now called on to play a role in Aids education.

“We had condoms out everywhere on the streets — everywhere, everywhere,” Mechai said in a TED Talk recounting his approach. “In taxis, you get condoms, and also, in traffic, the policemen give you condoms.”

And Mechai — despite or perhaps because of his MBA from Harvard — took it upon himself to become the recognisable symbol that he said every successful marketing program needs, dubbing himself “Captain Condom” and going to schools and nightclubs to promote safe sex.

The World Health Organization called Thailand’s approach to the Aids crisis “the quickest response to the problem that we have ever seen.” The United Nations said Mechai’s program had achieved a 90% decline in new infections, and the World Bank estimated that it had saved 7.7 million lives between 1991 and 2012. 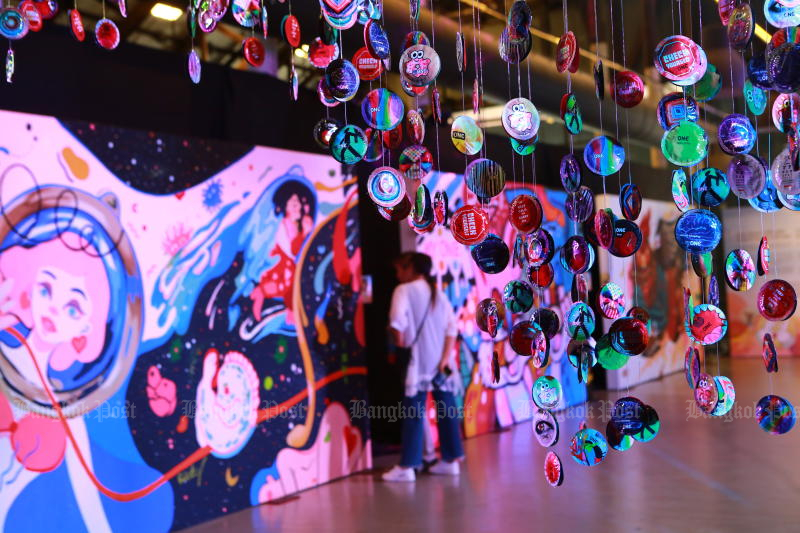 Mechai was born in Bangkok in 1941 to a Scottish mother, Isabella MacKinnon Robertson, and a Thai father, Samak Viravaidya, both doctors, who had met as students at the University of Edinburgh Medical School.

Raised speaking Thai and English, he went to high school and college in Australia, earning a bachelor’s degree in commerce in 1964 from the University of Melbourne.

His comfort among both Thais and Westerners, Mechai said, has enhanced his ability to pitch his programs — and lobby for financing — in different cultures, successfully courting substantial grants from foundations, development organisations and foreign governments.

Returning to Thailand in 1966, Mechai thought at first of becoming a doctor like his parents. “I helped my father stitch up a finger that had been cut off, holding onto a rubber tourniquet,” he said, “and I realised, that’s not for me.”

Attracted by the wide range of issues it addressed, he joined the government’s National Economic and Social Development Board, where he served for eight years as an economist.

At the same time, he found other outlets for his energies, writing a newspaper column, hosting an evening radio show and teaching a part-time university English course.

His penchant for performance also led him to acting, and he appeared in a popular, sentimental TV drama, “Star-Crossed Lovers,” playing a Japanese army officer who falls in love with a Thai college student during World War II.

In 1971, he married a childhood friend, Thanpuying Putrie, with whom he has one daughter. His wife is a cousin of His Majesty King Bhumibol Adulyadej the Great, the father of the current king, and she served for years as his deputy principal private secretary. Mechai delights in saying that his mother was the doctor who delivered his future wife.

In his role as a government economist, he toured the country and saw first-hand the poverty and the social and economic dislocations that he later devoted his life to addressing.

“There were children everywhere,” he said of Thai villages. “This was the great problem. And I realised I was wrong in thinking the government could do everything. So, I decided to go out on my own.”

In 1974, he left government to find the Population and Community Development Association. It flourished and branched out to address a range of social and economic issues, from rural development to environmental protection.

In the years that followed, his career path took him in and out of government roles, including as Cabinet spokesperson, deputy minister of industry and three terms as a member of the Senate between 1987 and 2006.

In addition to his work on family planning and safe sex, developing Thailand’s rural economy has been a decades long focus of his activism. In the 1990s, he founded the Village Development Project, which aims to foster entrepreneurship and create income-generating activities in rural Thailand.

It has set up small factories in the countryside to lure workers back home from sweatshops in Bangkok, part of an effort to combat the urban migration that has debilitated rural economies.

His said his greatest pride now is the Mechai Bamboo School in northeastern Thailand, set up to “reengineer rural education” by turning the school into a lifelong learning centre and an active contributor to life in its community.

A boarding school with a student body of 180 that makes a point of including disabled students and students living in the country without legal permission, it extends the concept of education into a set of life skills, according to Mechai.

“The school aims to foster good citizens who are honest, willing to share, and truly accept and practice gender equality,” Mechai said.

Its outreach programs offer assistance to older villagers, give nutritional advice to pregnant women and assist in small-scale agriculture.

Mechai said more than 100 small rural schools have begun to follow his lead in becoming more involved in their communities.

Although now at an age when most people are slowing down, Mechai has no plans to stop addressing what he said were his life’s main concerns: “to combat economic and social inequality by reducing births, reducing deaths from Aids and reducing poverty, financial dependence and ignorance.”