Jitchaya Atthaporn and lawyer Ronnarong Kaewphet answer reporters’ questions on Thursday after they filed complaints related to the handling of a car crash in which her father’s body was not found until after his crashed car had been towed to a police impound lot. (Photo: Wassayos Ngamkham)

The daughter of a man whose dead body was found in his car almost 12 hours after a crash in Chon Buri has filed a complaint against police and rescuers, saying she did not believe he died instantly at the scene.

If her father did not die at the crash scene, he might have suffered greatly from heat and suffocation in the hours afterward, said Jitchaya Atthaporn, and people must be held responsible for what happened.

Ms Jitchaya, 30, and lawyer Ronnarong Kaewphet filed the complaint with Pol Lt Kittithat Thiankaew, deputy investigation chief at the Crime Suppression Division in Bangkok on Thursday. It alleges that highway police who were alerted about the crash and rescuers acted negligently and that caused the death of her father.

Phattarachai Atthaporn, 68, of Rayong, was found dead inside the wreckage of his car only after it had been towed to the Khao Khiew highway police vehicle impound lot in Si Racha district of Chon Buri.

The late discovery has drown harsh criticism of highway police and rescuers who attended the crash scene for failing to properly examine the car for possible injured occupants.

The accident occurred on Tuesday morning when the car struck a concrete barrier on Motorway Route 7 in Si Racha.

Emergency responders reportedly saw no sign of the driver and the badly damaged car was towed to the police lot shortly afterward.

A police officer at the impound lot who examined the wreck later that evening found the body of the driver, still in the driver’s seat. He had severe neck injuries and broken bones and had been dead for several hours.

Mr Ronnarong said he personally did not want Chon Buri police to handle the case. Autopsy results had determined the cause of death, but could not tell whether the driver died before, during or after the crash, said the lawyer.

According to Mr Ronnarong, a doctor who examined the body had not confirmed that the driver died at the scene of the crash, as the police had contended. Police must find ways to establish the cause of death, he added.

The Transport Ministry, which oversees the Department of Highways, must also be held responsible, he said. However, the case did not constitute an offence under Section 157 of the Criminal Code, which deals with malfeasance and dereliction of duty by state officials, he noted.

Ms Jitchaya said that so far no agencies had contacted her to show responsibility over the death of her father. They only said they would cover funeral expenses and expressed regret over the death.

She questioned the work of police and rescue workers involved in examining the wrecked car. She said she was not convinced by police officers’ remarks that her father might have died on the spot.

She said she wanted the case of her father to set a precedent to ensure that police must thoroughly search for injured people in all road crashes in future. 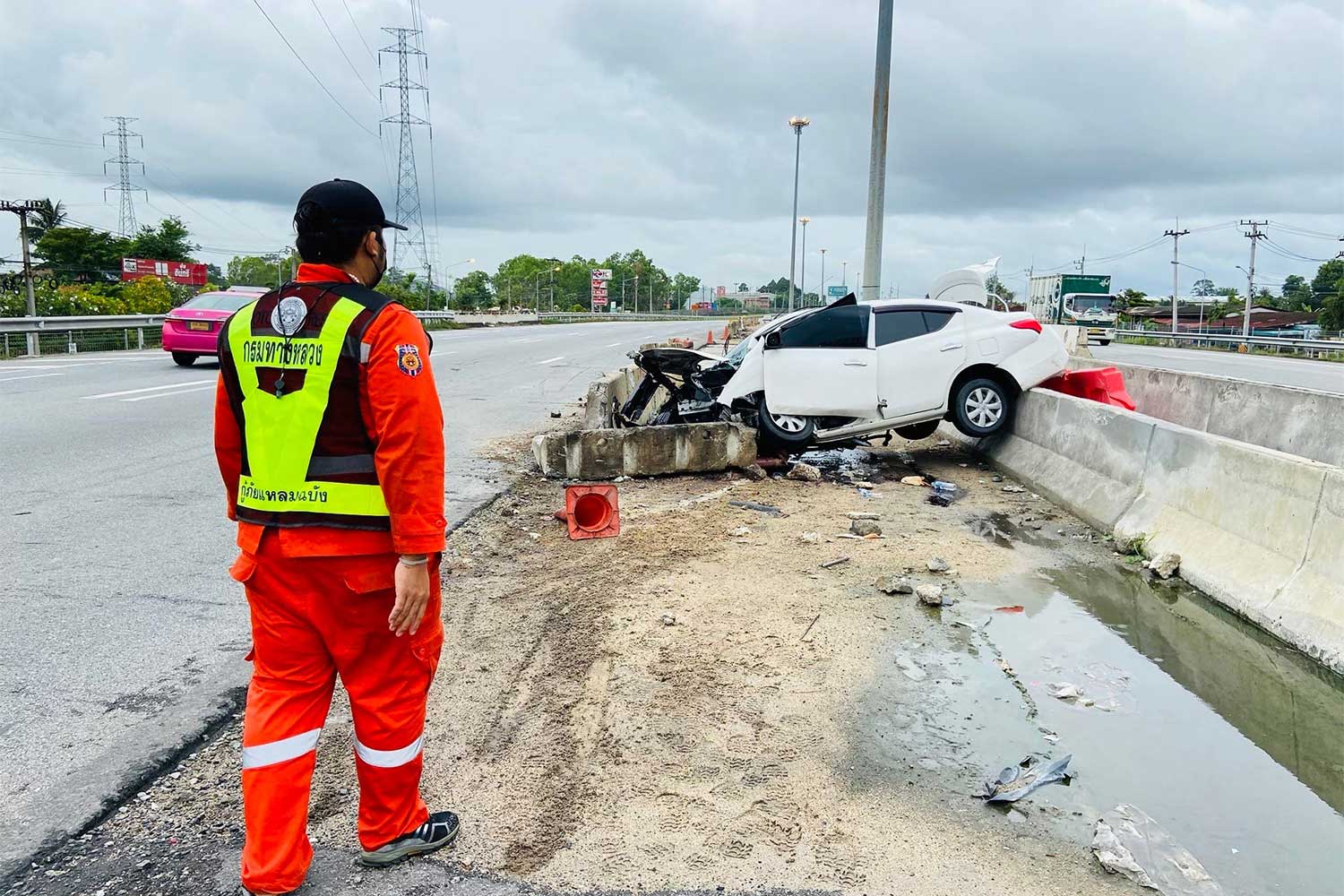 An emergency response worker examines a car that crashed on Motorway Route 7 in Si Racha, Chon Buri on Tuesday morning. The dead driver was not discovered inside the car until almost 12 hours later. (Photo:@fm91trafficpro twitter, Thai Truck Laemchabang Facebook)