He didn't see that one coming

A young man who turned his hand to robbery after watching how it was done on TV says he was dismayed to find that in real life, CCTV cameras were ready to catch his every move.

Krasang police in Buri Ram last week nabbed Sarawut Kokram, 22, for robbing a woman at knife-point on Aug 6. He made off with her bag containing 19,000 baht in cash and an ATM card, from which he was able to withdraw another 7,000 baht.

The victim, Lahon Unaiban, 55, a trader who had come to a local market to buy goods, helpfully left a slip of paper in her bag with the PIN number to the ATM written on it.

Mr Sarawut told police he is a fan of computer games with a robbery theme, and binge-watched the TV series Lupin, in which a thief sets out to avenge his father for wrongs committed against him by a wealthy family. "I wanted to see if I could pull off a robbery in the same way, and what would happen when I did," he said.

As part of his preparations, he bought a long-sleeved top with a hood, and a black mask. On the night of the crime, he parked his motorcycle about 300m from the scene the way he had seen it done on TV. He walked to a convenience store where he saw his victim. He approached Ms Lahon without hesitating, took out a knife and told her to hand over the bag.

After fleeing, Mr Sarawut withdrew the cash with the ATM card in her bag, making sure to use a cash machine outside the district so he would not be caught. The next day he bought a chair for playing his computer games, and topped up his phone, which cost 5,000 baht in total. He kept the rest for another day but police turned up to arrest him.

Mr Sarawut said he didn't have a plan to spend the money; he just wanted to try robbing someone. He was dismayed to find that while in the Lupin TV series they have no CCTV cameras, in real life, they have plenty. "I just didn't know," he said, while offering an apology to his victim.

Pol Col Wisanu Arphonpong, Krasang police head, said the district is part of a safety zone created by Police National Headquarters. As such, it is festooned with CCTV cameras: 200 in the district itself and immediate area. "When we received the complaint, we examined all cameras in a 3km radius, and knew immediately who did it.

"We obtained a warrant to search his home for evidence, where we found plenty incriminating the suspect, including the clothes he wore during the robbery." Mr Sarawut was charged with theft. 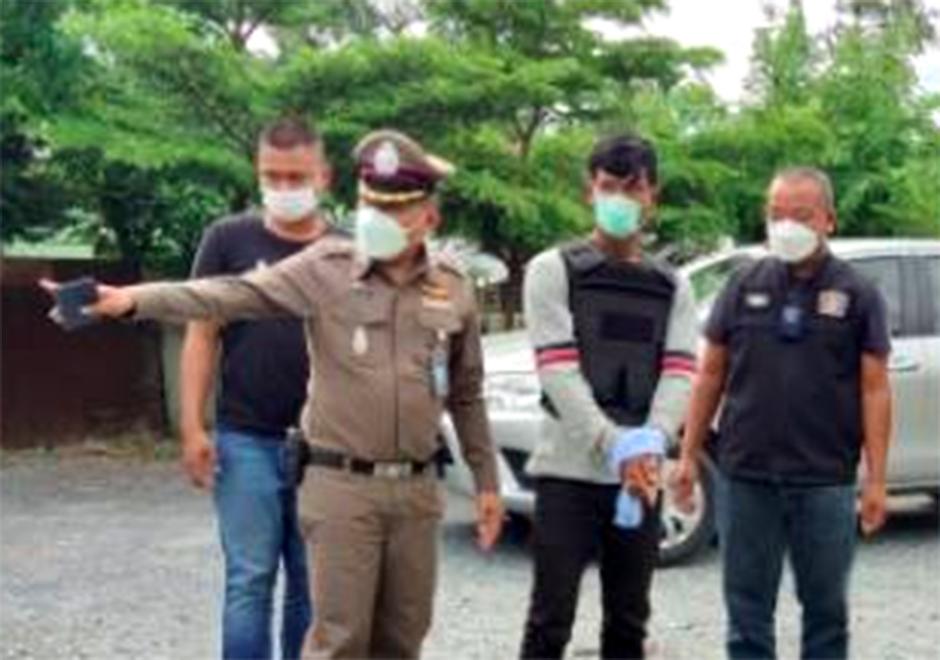 Singha 'Kwang' Chimphan is taken to the scene of the crime he committed 13 years before.

A Suphan Buri man's past caught up with him thanks to a DNA match when he was nabbed for a murder committed 13 years before.

Sa Kaew police in Muang district last week arrested Singha "Kwang" Chimphan, 33, from Taling Chan sub-district, after a DNA test pointed to him as the suspect in the June 19, 2009 murder of Aree Meechana, 52, stabbed in a row over drugs money.

The crime had gone unsolved despite police questioning 10 witnesses at the time.

It occurred at Aree's home in Taling Chan, where police also found pubic hair and a condom. They sent the samples to a forensic lab which extracted DNA and entered it in a database.

Fast forward to March 18 this year, when police arrested Singha for taking drugs, and took his DNA. This matched the DNA in the database taken from scene of the murder all those years before.

Police arrested him at home. Station head Pol Col Paitoon Sriwilai said he questioned him for 20 minutes and obtained a confession.

Singha said he and Aree had taken drugs on the day of the murder, when she asked for the return of 800 baht. He had borrowed the money to buy his supply.

He flew into a rage and stabbed her once in the chest. Singha fled the scene, threw away the knife, and went home to resume his life.

After he confessed, police took Singha back to the scene. Aree's house was long ago demolished, and is now just vacant land, so they asked him to point to where it probably occurred.

He also took police to Makhamthao U Thong canal, about 800m away, where he ditched the murder weapon. Back at the station, they had Singha reconstruct the scene.

Pol Col Paithoon said the DNA samples were compared as part of a project to combine criminal and forensic databases to bring them up to international standards.

Singha was sent to court cells to await further action. His father visited him there, telling his son that if he had done wrong he should confess, as he had no money to fight the case in court.

However, if not he would help him as best he could.

His son replied in a weak voice that he had already confessed.

He said he went to see Aree at home, they had sex, and when she asked for return of the money he stabbed her.

Singha has a lengthy past involving drugs. He was nabbed for taking methamphetamines in Nonthaburi in December 2018, and caught again for drug use in March, when police took his DNA, leading to the cold case murder charges. 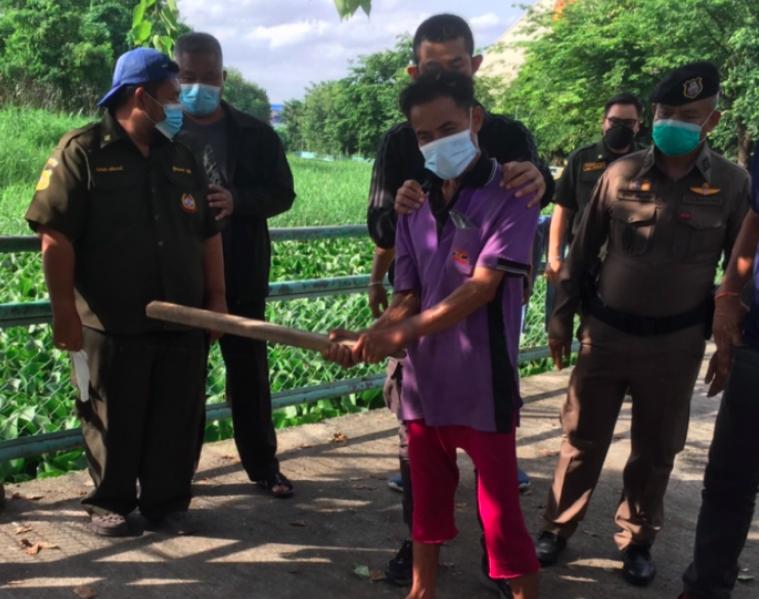 Suphon Suprom shows how he hit over his mate over the head with a piece of wood.

'He took my bridge spot'

A homeless man upset after his mate ejected him from his usual sleeping spot under a bridge bashed him over the head until he was dead.

Bang Kaew police in Samut Prakan nabbed Suphon Suprom, 47, originally from Kalasin, after he struck Koh (no surname given), also 47, from Kamphaeng Phet, over the head with a piece of wood, killing him.

Koh and Mr Suphon were close friends who lived under a bridge on a road alongside the Kanchanaphisek Expressway in Bang Phli.

Rescue workers and police found Koh, wearing jeans but no shirt, lying near a tree where he and his killer drank regularly.

He had been hit over the forehead with a hard object. They also found two small bottles of energy drink which retailers commonly recycle to sell lao khao (fiery Thai rice whisky).

They found his killer Mr Suphon in a nearby housing village, where he fled on a bicycle.

A local came forward to say he had seen him there. Mr Suphon asked the man to go back and check on Koh, as he was worried about his friend. However, by the time help arrived, Koh was already dead.

The homeless man told police that he lived with the victim under the bridge. On the day he hit his friend, he had gone fishing, and swapped his fish for alcohol, which they drank under a nearby Bodhi tree.

They started to argue after getting drunk. "He threatened me and chased me away, telling me to sleep elsewhere," Mr Suphon said.

Adding insult to injury, the victim took Mr Suphon's old sleeping spot under the bridge, which annoyed him. He grabbed a piece of wood from nearby and struck him over the head three times before fleeing.

Reporters spoke to a security guard who said the victim and his killer were close. "Whenever they drink together they argue, only today it got out of hand," he said.