A big fire at a Bangchak petrol station in Pattani's Nong Chik district early Wednesday morning - one of the many coordinated attacks by southern insurgents in Pattani, Yala and Narathiwat. (Photo: Abdullah Benjakat)

The attacks in Yala, Narathiwat and Pattani began late on Tuesday night and continued into the early  hours of Wednesday morning. Three people were reported to have been injured.

They were aimed at disrupting the region's economy, according to Internal Security Operations Command (Isoc) Region 4.

There were two attacks in Pattani, six in Yala and nine in Narathiwat, he said.

The worst damage was caused to a Bangchak petrol station in Pattani's Nong Chick, which was burned down.

The attacks started In Yala province, when a bomb exploded inside a 7-Eleven store at a PTT petrol station in Yaha district.

Pol Capt Sarayut Kochawong, an investigator at Yala police station, said that about 11.50pm a man wearing a face mask and Muslim woman's clothing walked into the store and placed a black bag on the counter. He told the staff and customers to get out of the store if they did not want to die.

They all fled the store. About 10 minutes later a bomb inside the bag went off. The explosion caused some damage to the store but inflicted no casualties.

In Bannang Sata district, about midnight, four men drove past a 7-Eleven store on two motorcycles and threw an incendiary bomb at the store, at Moo 2 village in tambon Bannang Sata. The fire caused little damage.

About the same time, a bomb went off at a Mini Big C store at Moo 2 of tambon Kayu Boko, Raman district, and another at a mobile phone signal tower at Moo 1 village. The two bombs caused minor damage.

Also in Yala, a bomb went off at a 7-Eleven store at Moo 4 in tambon Po Seng of Muang district. A subsequent fire caused little damage to the store.

In adjacent Narathiwat province, a fire was started at a 7-Eleven store at the PTT petrol station at Moo 4 in tambon Bacho, Bacho district, about 12.45am. The store was extensively damaged. A Myanmar delivery man at the store was injured and admitted to Bacho Hospital.

In Si Sakhon district, a fire caused extensive damage to a 7-Elevan store at a PTT petrol station in Si Sakhon Municipality. A boy, Abukori Kadir, 14, was burned on both legs and a woman, Wilaiwan Kaewsuk, 23, suffered chest pain.

The fire at a petrol station in Sungai Kolok, Narathiwat. (Video supplied by Abdullah Benjakat)

In Sungai Kolok district, there was a fire at a 7-Eleven store at a PTT petrol station in Tambon Pasemat Municipality. The fire spread to two fuel pumps but was quickly put out. The store was extensively damaged.

Arsonists also struck at a 7-Eleven store and a Mini Big C store at Moo 1 village in Cho Airong district of Narathiwat, causing some damage.

In Pattani province, a bomb exploded about 12.20am, followed by a fire, at Bangchak petrol station at Moo 8 village in tambon Bo Thong of Nong Chik district on the Hat Yai-bound side of Highway 43. The fire spread to a Mini Big C store inside the petrol station, causing heavy damage.

Three fire trucks were dispatched to the scene. They were able to bring the fire under control in two hours. An oil truck and two trailer-trucks parked at the petrol station also caught fire and suffered major damage.

Police were investigating the attacks, which they said were obviously coordinated. 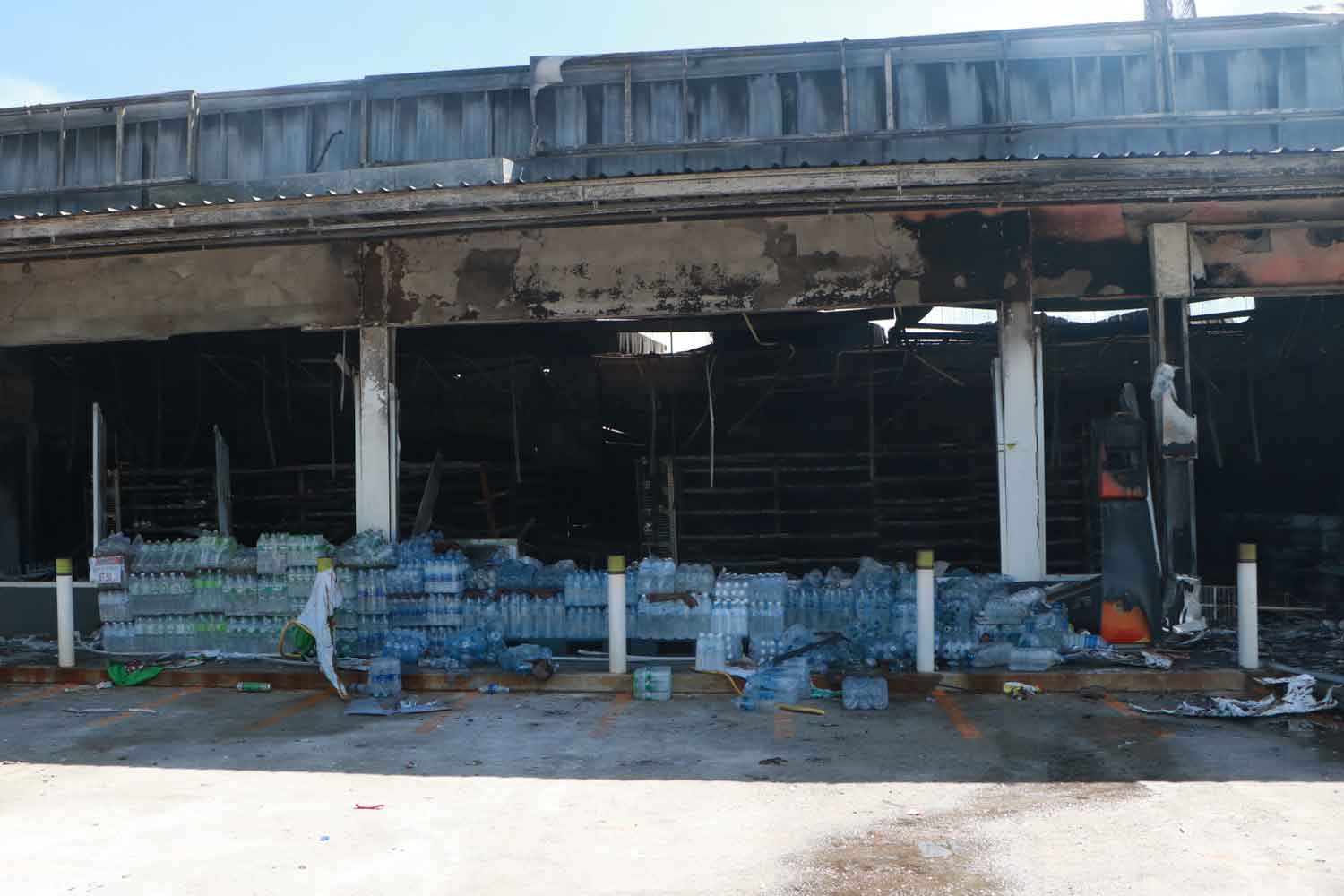