BRN claims responsibility for attacks on convenience stores in South

The burned shelves of a fire-gutted convenience store - symbol of capitalism and destroyer of the local economy according to the BRN - in Sungai Kolok district of Narathiwat. (Photo: Waedao Harai)

The separatist movement Barisan Revolusi Nasional (BRN) has claimed responsibility for the wave of attacks on convenience stores in the far South early on Wednesday, saying these chain stores destroy the economies of local communities.

It apologised that a person was killed during the attacks, and said it was unintended.

There were coordinated arson and bomb attacks at 17 locations, mostly convenience stores, in the three southernmost border provinces in the early hours of Wednesday.

The BRN claimed responsibility on its Facebook page on Thursday. It said the attacks were intended to damage these "symbols" of Thai capitalism, which destroyed local communities' economies.

It said the loss of life was unintended. Its members had told store staff and customers to leave the premises.

"The attacks were intended to strike at the power of capitalism, which is spreading fast in Patani. It is the power that is ruining the economies of communities and causing the closure of many community stores," the BRN said.

The separatist organisation said convenience store chains forced the closure of their franchisees' stores by offering discounts at their own stores that were later built nearby.

It also accused convenience store chains of imitating the products of other business operators and thus confusing consumers.

According to the BRN, convenience stores sell goods at expensive prices by reducing the content sold in small packs, which works out at being more expensive than the same goods sold in larger packs.

The BRN alleged the government and the armed forces were supporting the influence of convenience store chains.

The BRN did not name or further explain the "unintended" victim of the attacks.

Police said Masarit Mama, 21, a resident of tambon Puyo of Sungai Kolok district, Narathiwat, was killed. His body was found inside the ruins of a burned 7-Eleven store at a PTT petrol station in Sungai Kolok on Wednesday evening.

Eyewitnesses said the attackers ordered store staff and customers to leave before setting it ablaze. However, Masarit ran to a locked back door and died in flames.

Officials said seven other people were slightly injured in the multiple attacks in Narathiwat, Pattani and Yala provinces, which began just minutes before midnight on Tuesday.

Many 7-Eleven and Mini Big C stores were targeted at petrol stations. 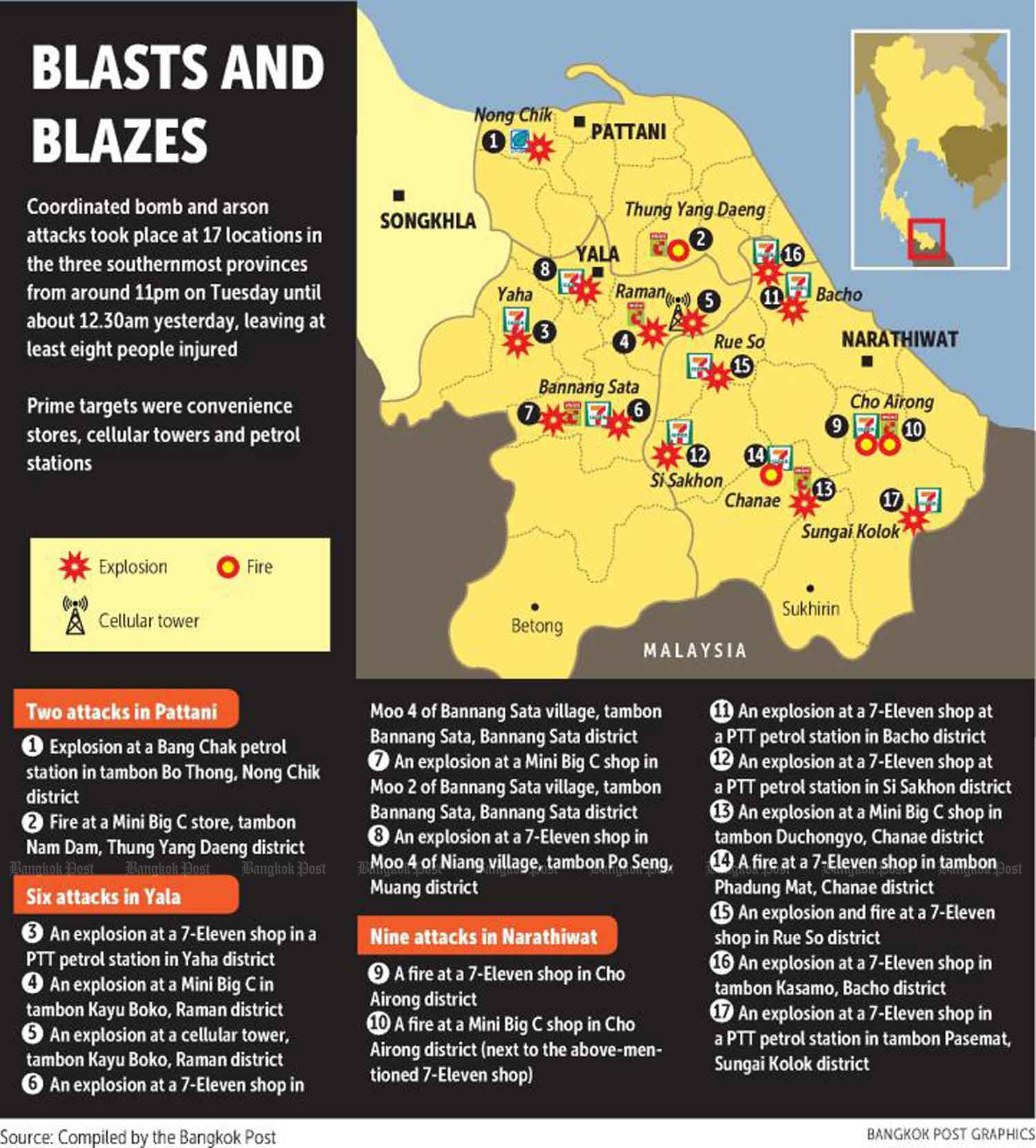