Anti-alcohol activists rally at the Tourism and Sports Ministry in 2019 to voice their opposition against a proposal to extend opening times of night clubs to 4am. (Photo: Apichart Jinakul)

Doctors have warned against the government's plan to extend the operating hours of pubs to 4am to boost the economy, citing the potential for more road accidents and the risk of further Covid-19 infections.

Dr Prasit Watanapa, dean of Mahidol University's Faculty of Medicine Siriraj Hospital, on Friday expressed his concern about allowing pubs and bars to stay open later, saying that the present closing time of 2am is late enough given the current Covid-19 situation.

Dr Prasit said there was no need to rush such a measure as night socialisers may get infected due to the longer gatherings and spread the disease to their families, notably the elderly.

Dr Taejing Siripanich, secretary-general of the Don't Drive Drunk Foundation, said the measure may help stimulate the economy but it could be at the expense of the health and safety of the public.

In addition, Dr Taejing did not believe many more foreign tourists would choose Thailand because of the extension of the night entertainment venues' operating hours to 4am as most come to visit tourist sites.

Citing road accident data in Thailand showing that the fatality rate in the second half of this year is already higher than last year, Dr Taejing suggested this rise correlated with the easing of restrictions for these venues and on alcohol sales. 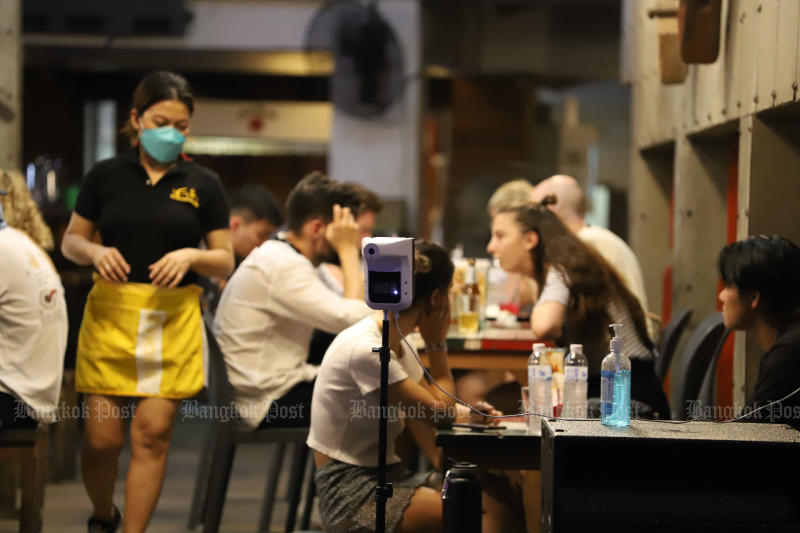 Locals and tourists are seen at a nightspot in Bangkok. (Photo: Varuth Hirunyatheb)

Mr Chadchart responded to the matter while live streaming during his jogging routine in the morning recently by saying that the idea would help spur the economy and increase transparency as later licences have previously been awarded in a more ad hoc fashion prone to bribery.

"Besides the economic stimulus, the extension of operating hours would help to ease congestion at those venues and lessen the need for pub owners to pay 'tea money' to remain open later," he said.

Business operators on Koh Samui, Koh Phangan and Koh Tao in Surat Thani have already thrown their support behind the policy as they believe it will lure more tourists.