People take part in a parade during the annual "Khong Dee Muang Nara" festival celebrating culture and traditions in Muang district of Narathiwat on Saturday. Many public activities have returned to the country since the government eased Covid-19 restrictions. (AFP photo)

This compared with 764 patients and 14 deaths reported on Saturday.

All new infections reported on Sunday were local cases.

The 24-hour period saw 1,170 patients discharged from hospitals after recovering.

As of Saturday, a total of 9,223 people were receiving Covid-19 treatment, including 5,998 in hospitals and 3,148 in home or community isolation, according to the daily update posted by the Department of Disease Control.

Of those in hospital, 651 were seriously ill patients with lung inflammation - with 333 dependent on ventilators.

The 12 people who died were aged from 31 to 88 with an average age of 70. All were Thais, according to the department.

Bangkok logged three new deaths while there were none in adjacent provinces.

Other central plains provinces further from the capital had two deaths — in Nakhon Sawan and Nakhon Nayok.

The North reported one death in Lamphun and the Northeast saw six new fatalities — two each in Khon Kaen and Nakhon Ratchasima, and one each in Nong Bua Lam Phu and Kalasin.

Vaccinations continued to progress, with 143.13 million doses administered as of Saturday. The government said 82.4% of the population has now received at least one dose of the vaccine, 77.3% at least two shots and 46.1% at least one booster shot.

The accumulated death toll stood at 32,629 since the beginning of the pandemic, including 10,931 so far this year. 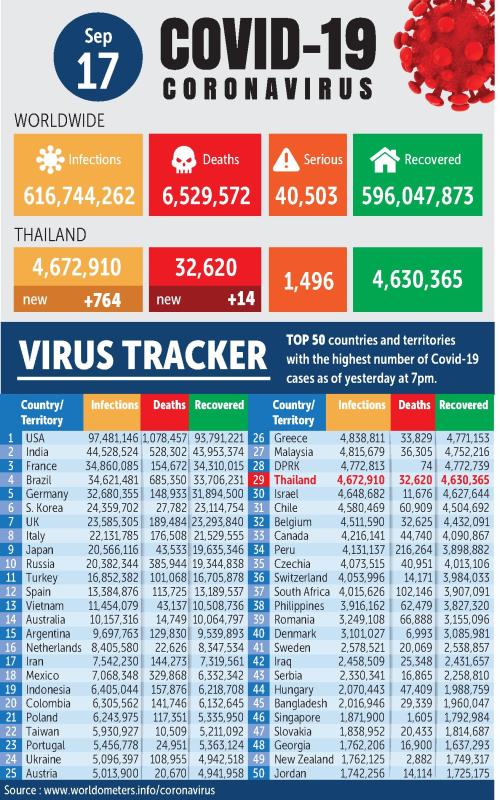