Dr Sumet made his remarks yesterday at the opening ceremony of Sustainability Expo 2022 (SX 2022) at the Queen Sirikit National Convention Center.

This year’s event is much bigger than the first three years ago, Dr Sumet said, while adding how increasingly important the sustainable development issue is among the international community.

The world has faced shortages of natural resources for a long time due because of an increasing population, he said, while further pointing out that the global population is expected to increase by 9 billion within 30 years.

He said His Majesty King Bhumibol Adulyadej the Great had earlier understood the problem and spent much of his life working to maintain a balance between soil, water, wind and fire — the basic elements for all living things.

“His Sufficiency Economy Philosophy [SEP] is not a way for just growing vegetables at home; it goes beyond that,” he said.

“It is the principle that suggests people conduct a self-assessment before doing business, that they have a reasonable reason for what they are doing while including risk management measures.”

The SEP’s key message was clearly explained by His Majesty King Bhumibol Adulyadej the Great’s 13 lines that warned people to understand globalisation, prepare for any changes and to be cautious of sudden changes that can impact all dimensions, he said.

“The majority of people are now learning more about sustainable development goals. And now, it is time to put them into action,” he said.

“This is not only a job for Thai people, but the whole world to create balance, security and sustainability for a better world.” 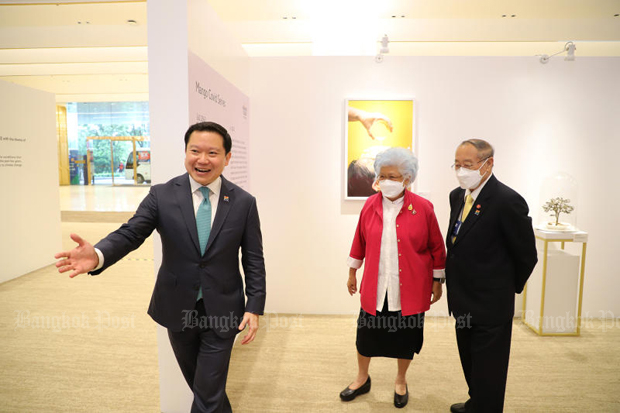 Thapana Sirivadhanabhakdi, president and CEO of Thai Beverage Plc (ThaiBev), who is also the chairman of the Sustainability Expo 2022 committee, said the world faces several challenges.

“Beyond climate change, which has now been well recognised as a clear threat to all of us, food and water security, as well as biodiversity degradation, are at the top of the environmental agenda,” Mr Thapana said.

To cope with such existential challenges, there needs to be worldwide collaboration and innovation which is impactful — this he said is the expo’s main objective.

Beyond actions, Mr Thapana said he believed that the right mindset is crucial to ensure the success of sustainable development in the long term.

“We strongly believe that the Sufficiency Economy Philosophy bestowed on us by the late King Rama IX — which emphasises moderation, reasonableness, and self-immunity, based on the two foundations of knowledge and virtue — can be our guiding light,” he said.

The SX 2022 is being held until Sunday. More than 100 leading Thai and overseas organisations are taking part in the event, and over 150 business leaders and experts will be event speakers.