Authorities are on high alert for rapidly intensifying Typhoon Noru which is expected to be downgraded to a tropical storm before reaching Thailand's Northeast on Thursday and exacerbate woes in already flooded areas that lie in its path. 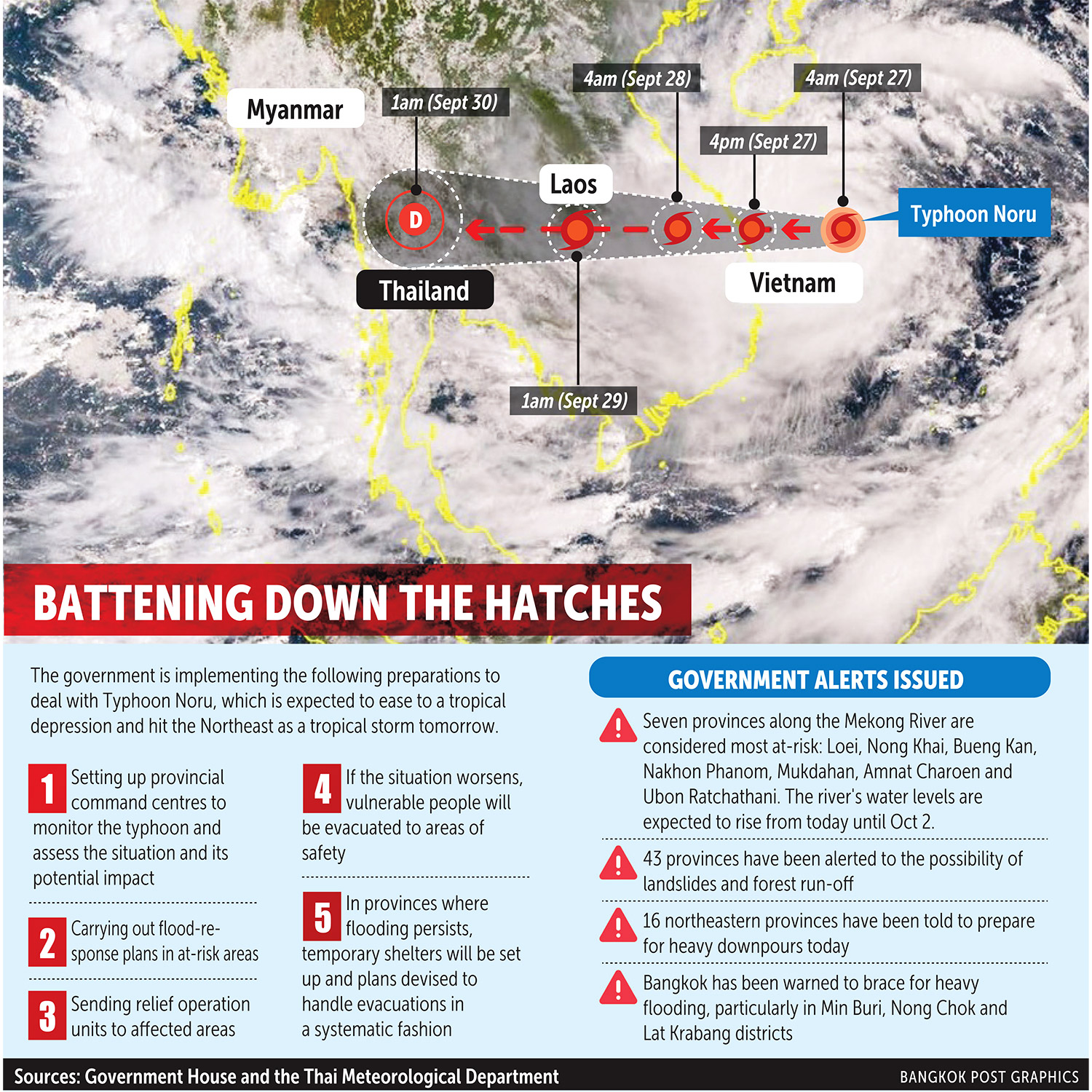 According to Tuesday's forecast by the Meteorological Department, Noru is expected to make landfall in Vietnam on Wednesday before weakening to a tropical storm and moving across Laos and then to the Northeast of Thailand in Ubon Ratchathani and Amnat Charoen on Thursday evening.

It will then downgrade to a tropical depression covering the Northeast, the North and the Central Plains Region. Ubon Ratchathani, Si Sa Ket, Surin and Buri Ram have been advised to brace for heavy rainfall brought by the storm.

According to the National Water Command, which has been monitoring the Mekong River, the water levels in the international border river are expected to rise from Wednesday until Oct 2 as a result of the heavy rainfall triggered by the storm.

The centre has alerted residents along the river banks in Nakhon Phanom, Mukdahan, Amnat Charoen and Ubon Ratchathani to prepare for the impact of surging water levels.

Prapit Chanma, director-general of the Royal Irrigation Department (RID), said he instructed authorities in charge of irrigation projects in at-risk areas in the Chi and Mun River Basins, as well as the Chao Phraya River Basin in the Central Plains region, to ensure water volumes in reservoirs are properly regulated and discharged to prepare room for an expected surge from the storm, in a bid to mitigate the impact on downstream areas.

Water pumps and water-propelling machines will be stationed along the Chi and Mun rivers to ensure water is pushed out to the Mekong as quickly as possible, he said.

Thaweesak Thanadechopol, deputy director-general of the RID, said that as of Monday, large- and medium-sized dams nationwide held 54.4 billion cubic metres of combined water volume or about 72% of their combined holding capacities.

That means they can still take in another 21.6 billion cu/m.

In particular, water volume at Bhumibol Dam in Tak was at 51% of capacity while that at the Sirikit Dam in Uttaradit was at 48%, Mr Thaweesak said.

But he provided assurances of the structural integrity of the reservoirs and said water discharges are proportionate to the rates of water inflows.

Residents in low-lying areas and along canals should take precautions.