Part of Muang district in Khon Kaen province is flooded as the Chi River overflows on Wednesday morning, with more rain on the way with tropical storm Noru. (Photo: Chakrapan Natanri)

Typhoon Noru is forecast to reach the northeastern provinces of Amnat Charoen and Ubon Ratchathani as a tropical storm on Wednesday night, bringing nationwide heavy rain.

Meteorological Department director-general Chomparee Chompurat said on Wednesday morning the typhoon was moving towards Laos after it made landfall in the Vietnamese city of Hoi An in Quang Nam province of Vietnam at 4am.

The maximum wind speed near the centre of the storm was about 150 kilometres per hour, with the typhoon moving westwards at 20kph.

Thousands in Vietnam were forced to evacuate on Tuesday as an intensifying Typhoon Noru barrelled towards the southeast Asian nation. Video | Reuters

"The typhoon will weaken to a tropical storm, pass through southern Laos and blanket the lower part of the Northeast of Thailand over Amnat Charoen and Ubon Ratchathani provinces on Wedneday night," Ms Chomparee said.

The storm would then gradually degrade to a depression and a strong low-pressure system. 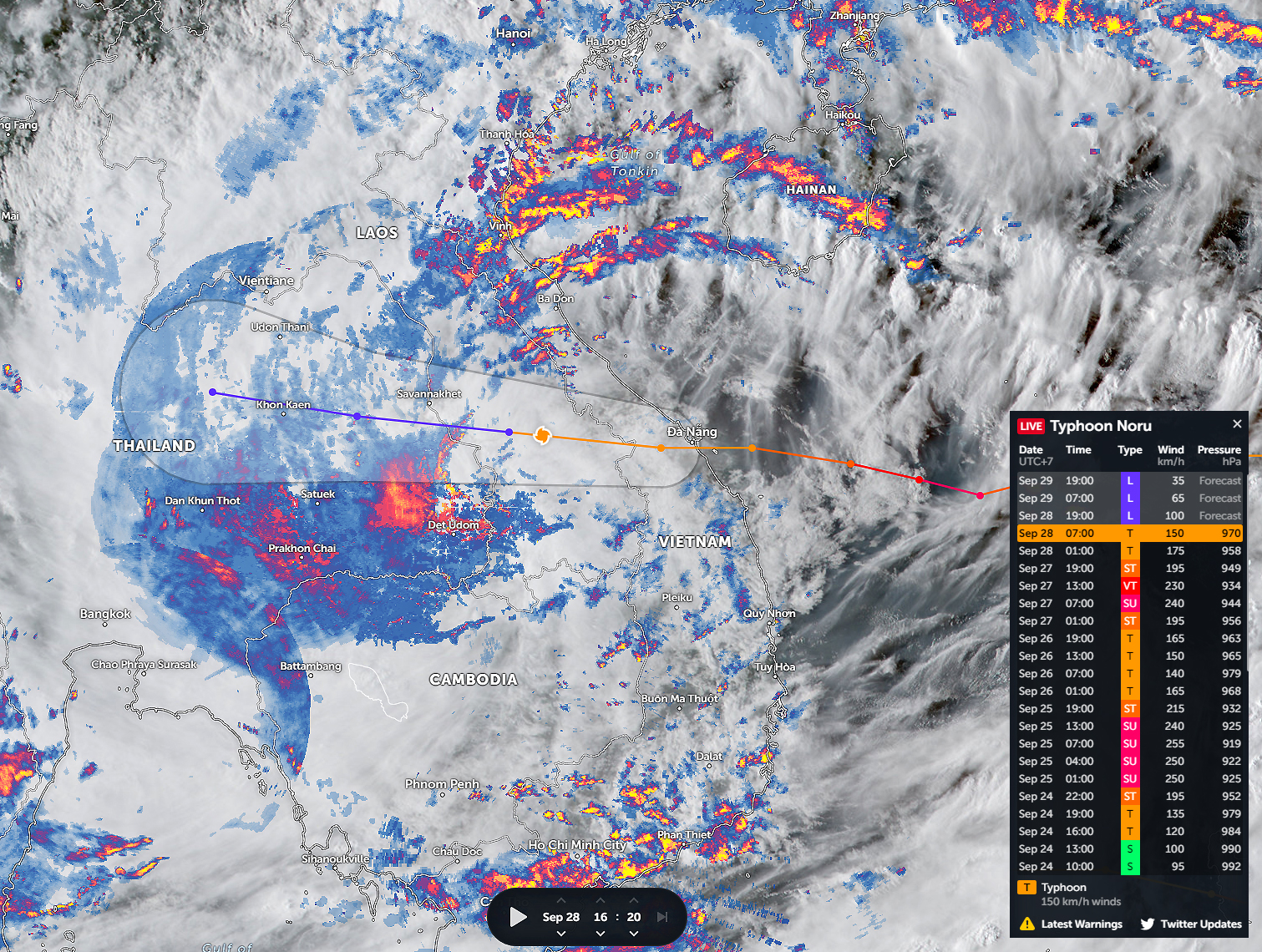 "It will bring about heavy rain and strong winds in the North, the Northeast, the Central Plains including Greater Bangkok, the East and the South... Flash floods and runoff  is possible, especially in slope areas near waterways and in low-lying areas. People living on the coast should be prepared for strong waves along the shoreline," she said.

Heavy rain was expected in the following provinces through Friday:

Although the storm had not yet arrived in Thailand, at least 12 provinces, most in the northern and northeastern regions, were already reporting flooding caused by rain that has pounded all regions since last week, the Disaster Prevention and Mitigation Department reported. (continues below) 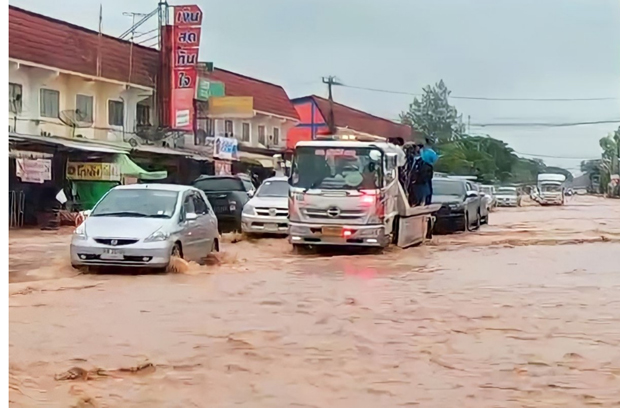 Chakrin Inimworaprat, the Lom Sak district chief in Phetchabun, expected the extra rainfall from the storm would worsen the already bad flooding in the district, with the water level still rising in the Pa Sak River. "The situation is worrying. We have no idea where the water will be released," he said.

Lom Sak had been inundated for three days. The water level in some tambons was up to 80 centimetres deep, he said.

In Khon Kaen, workers were installing 36 more pumps in the municipality ahead of the arrival of Noru. Some areas in Muang district have already been under water for at least three days.

Khon Kaen Mayor Theerasak Theekayophan said the central part of the municipality was surrounded by water.

Interior Minister Anupong Paojinda held a teleconference with all provincial governors from Phitsanulok, ordering them to be well prepared for the coming storm until Saturday as the Interior Ministry expected flash floods and mudslide in some provinces.

Gen Anupong and Digital Economy and Society Minister Chaiwut Thanakamanusorn planned a meeting in Ubon Ratchathani but unfriendly weather in the northeastern region compelled them to divert their flight to Phitsanulok.