One of 6 foreign suspects in Samui extortion case arrested

Andrey Nizhegorodtsev, 37, a Kazakhstan national, one of six foreign men accused of extortion by a Russian business couple on Koh Samui, after his arrest in Chon Buri. (Photo supplied/ Supapong Chaolan)

SURAT THANI: One of six foreign men accused of the extortion of 1.8 million baht in cryptocurrency from a Russian realtor couple on Koh Samui has been arrested in Chon Buri province.

Andrey Nizhegorodtsev, 37, a Kazakhstani, was taken into custody by Chon Buri police at a house in tambon Huai Yai of Bang Lamung district on Wednesday afternoon.

Mr Nizhegorodtsev was wanted under an arrest warrant issued by the Koh Samui Provincial Court for collusion in theft, physical assault without causing bodily or mental harm, and coercing people through  implied threats. They also impounded a black van believed used in committing the alleged offences.

The suspect was then taken to Koh Samui police station, in the southern province of Surat Thani.

According to police, security camera recordings showed Mr Nizhegorodtsev and another man getting out of the black van to exchange money at a currency booth not far from the coffee bar where the alleged offences occurred.

During questioning, the suspect gave no information about the other five suspects, according to police.

Evgenii Abdullin, 31, and his wife Ekaterna Abdullin, 31, both Russian nationals, filed their complaint with Pol Lt Col Udomsak Thappa, investigation chief at Koh Samui station, on Monday. They said six foreign men confronted them in a coffee bar on Koh Samui and threatened and extorted them out of 1.8 million baht.

The couple said they were seated in Boy’s Organic Coffee shop in tambon Taling-ngam, Koh Samui district, on Sept 15. Six foreign men approached their table and threatened them, demanding money.

According to their complaint, four of the men arrived in a black van and the two others on a red motorcycle. The men intimidated them and demanded they transfer US$3 million in cryptocurrency to them, about 113 million baht.

Mr Abdullin said he told them he had only $58,000, or about 2.28 million baht, at the time. Fearing for their lives he transferred $50,000 worth of cryptocurrency, equivalent to 1.8 million baht, to the gang. (continues below) 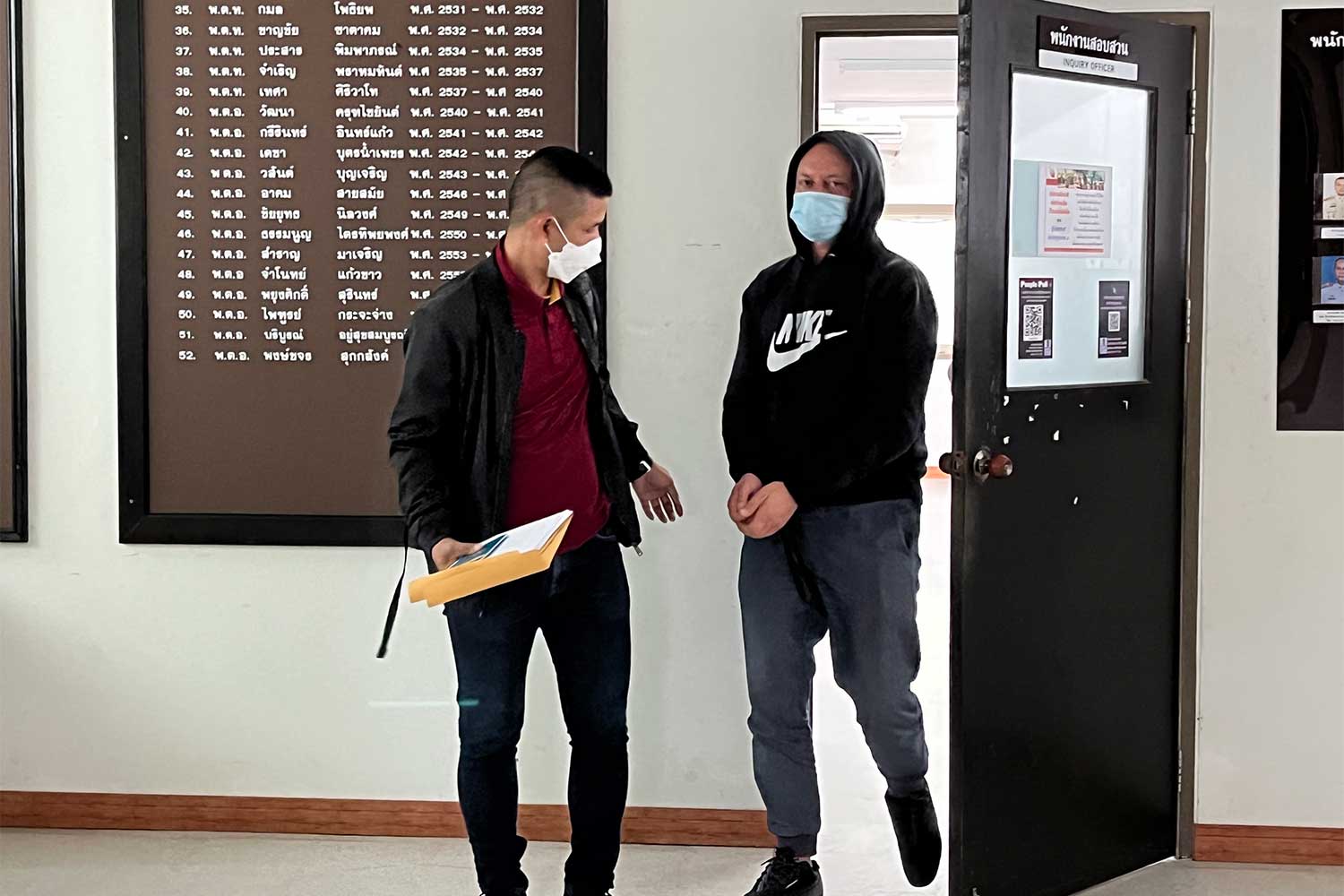 Andrey Nizhegorodtsev, one of the six suspects, is taken out of the interrogation room after his arrest in Chon Buri. (Photo supplied: Supapong Chaolan)

On Wednesday, Pol Maj Gen Wanchai Sukchaem, crime suppression chief at Bo Phud police station on Koh Samui, took Oleh Yasoshenko, a Ukrainian national, from a villa in tambon Bo Phud for questioning. Investigators said the man had booked ferry tickets to Koh Samui for Mr Nizhegorodtsev and the other foreigners before the alleged robbery. They had travelled from Chon Buri.

During questioning, Mr Yaroshenko admitted he knew the Kazakhstani suspect, but denied any involvement in the alleged crime, police said.

Immigration police found Mr Yaroshenko had overstayed his visa. He was held in police custody for further questioning.

As for Mr Yaroshenko, the man only booked ferry tickets for the six suspects and he might not be involved in the crime, Pol Maj Gen Naphanwut said.

The Russian couple only this week filed their complaint with police, even though the events occurred on Sept 15, because they were being followed by the gang and feared for their safety, according to Pol Maj Gen Naphanwut.

They have requested witness protection from the Justice Ministry.

A police source said the Koh Samui Provincial Court had approved warrants for the arrest of six foreign suspects in the case, including Mr Nizhegorodstev, who was caught in Chon Buri.