It's logical that No.8 drivers try to get as many passengers as possible. They're given a share of the ticket sales for each journey.

The infamous No.8 bus runs between Happy Land in the eastern outskirts of Bangkok and Memorial Bridge. (Photo: Patipat Janthong)

A "Pink Devil" roars down Bangkok's busy streets, furiously overtaking tuk-tuks, cars and motorbikes, narrowly avoiding a collision as it slows to allow passengers to scramble on before veering back into the capital's hectic traffic. Welcome aboard the No.8 bus.

Infamous in the Thai capital, the No.8 route has spawned parody songs, viral TikToks, horrified YouTube videos and even a feature-length Fast & Furious-style film. Now the old-fashioned diesel buses are being phased out and replaced with cleaner electric models.

But the hair-raising antics of the "Pink Devils", as Thais call them, mask the tough conditions for overworked drivers incentivised to complete their routes as fast as possible.

"It is a competition," said driver Aphisak Sodmui, who has helmed his "hot" bus -- as the non-airconditioned, usually open-windowed models are known -- for the past decade. 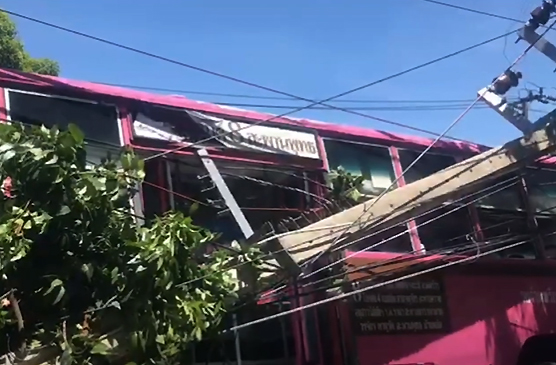 A No.8 bus ran off a road on a curve and struck trees and power poles in Bang Kapi district, Bangkok, in July 2021. (File photo)

A succession of high-profile No.8 deaths in recent years have raised calls for reform and now new firms are overhauling the system, promising an improved service and replacing the buses with electric vehicles.

But with a global ranking of ninth highest in road fatalities according to the World Health Organization (WHO), Bangkok governor Chadchart Sittipunt has a long journey ahead in his attempts to clean up the traffic-choked megalopolis.

And it does not look like the No.8 will shake its reputation so easily -- one of the newly inaugurated buses has already crashed, though no one was injured.

The problem, according to Thai transport expert Sumet Ongkittikul, lies with the private firms who lease the route concession from the central Bangkok Mass Transit Authority (BMTA).

Under their management, drivers are given a share of the ticket sales for each journey, on top of their salaries.

"So, it is very logical that each driver tries to rush to get as many passengers as possible," he explained.

"Even within the company the drivers are racing each other to get the passengers."

"We have to complete the route at least four times a day for us to have enough money to live," Aphisak said.

But Sumet believes this sort of behaviour is on the way out with the upgrade.

"What we hope is that the new operator will give more attention to training their drivers... to behave better," he said. 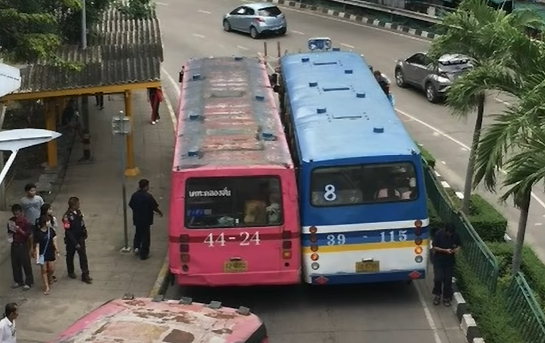 A No.8 bus attempted to overtake a No. 44 bus at a bus stop near a shopping mall in Lat Phrao district, Bangkok, in Sept 2018. As a result, passengers were stuck inside the No.8 bus for some time. (File photo)

Denying the No.8's reputation, Yothin Wuttisakchaikul -- whose family manages one of the routes -- blamed it instead on online commenters who have "never used this bus service before".

"Actual passengers would know the actual service of Bus No.8," he said, adding that while drivers competed, "it is not to a frightening degree".

It's 3.30am at a bus depot in the city's northeast, and Aphisak and his family are preparing for the day.

He starts his shift at 4am, clambering aboard with partner and bus conductor Arunee On-sawats and -- on the day AFP accompanied them -- their two boys, 11-year-old Phan and eight-year-old Mon.

As a No.8 driver, he will not finish until 9pm or later if there is rain or heavy traffic -- two near-daily guarantees in Bangkok.

Aphisak -- who like his children grew up on buses with his conductor father -- said he has never collided with cars but admitted that "pick-up trucks mostly crashed the bus I was driving in".

Customer Sai Pin, 47, said she had seen a change since the transition to the new buses -- which now have a slightly higher fare of 15 baht ($0.39).

"With the old buses, you might encounter lots of fast driving. The new buses have improved on that," she told AFP. 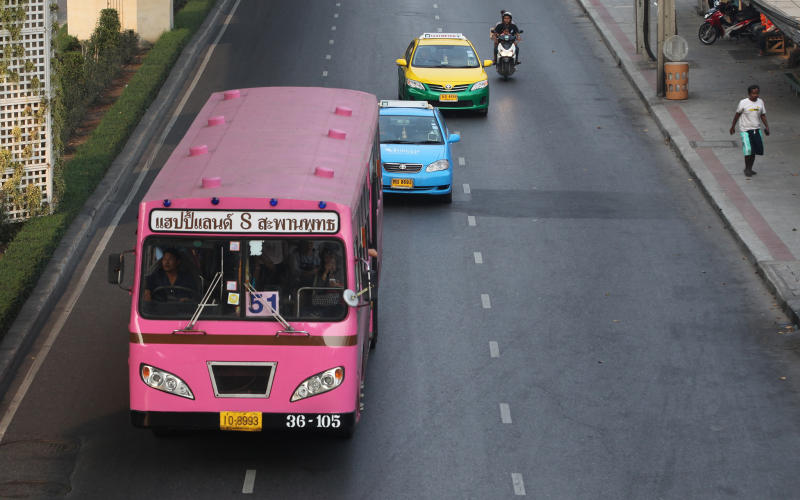 A No.8 bus runs between Happy Land in the eastern outskirts of Bangkok and Memorial Bridge. The No.8 bus operator has received many complaints about its service. (Photo: Thiti Wannamontha) 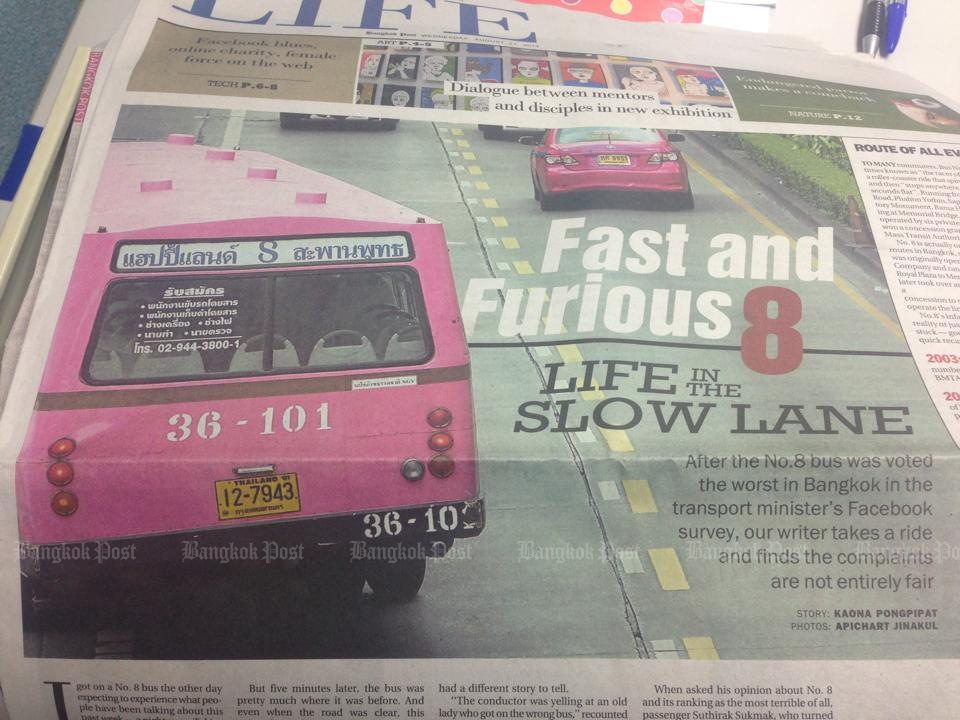