An aerial view shows the municipality in Muang district of Chaiyaphum is submerged on Sunday. (Photo: Makkawan Wannakul)

Several provinces located along the path of depression Noru remain flooded as weather forecasters on Sunday warned of rain at least for another day.

The Disaster Prevention and Mitigation Department on Sunday reported flooding in 17 provinces, most of them in the northern and northeastern regions that were in the storm's path.

Although Noru claimed only one life, in Si Sa Ket, with two people missing, it caused overflows in rivers and reservoirs as it unleashed heavy rain along the way.

Ubon Ratchatani was the frontline province pounded by Noru when it entered Thailand from Cambodia and Laos, weakening from storm to depression. Noru then moved through Chaiyaphum and Phetchabun among other provinces. The three provinces were still inundated on Sunday, with Chaiyaphum hit the hardest due to the overflow of water from two reservoirs that left the municipality under water.

Muang district was one of the seven districts in the province declared disaster zones.

Phetchabun governor Sophon Suwannarat on Sunday hoped conditions would improve during the week as the water level on roads in the business district continued to drop.

In Ubon Ratchathani, workers and soldiers were reinforcing flood walls with more sandbags as water overflowing from the Moon River continued to rise in Warin Chamrap district, according to the provincial public relations office. 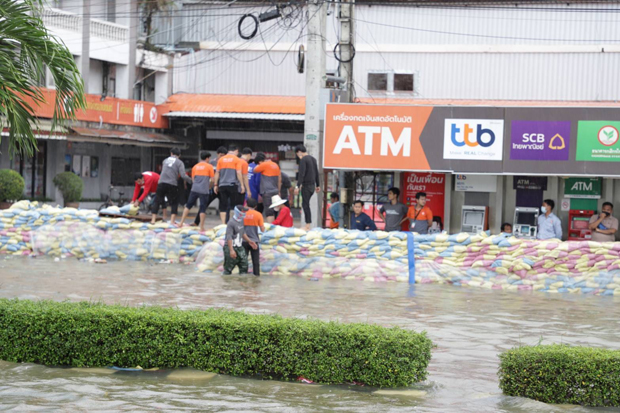 The Meteorological Department on Sunday said it expected seasonal rain at least until Monday.

"The chance of rain is 80% mainly in the northern, northeastern, and central areas and Greater Bangkok," forecaster Kosin Siengwattana said. Downpours would hit some provinces, including Ranong, Phangnga and Phuket, he added..