The Bangkok Metropolitan Administration (BMA) has asked private company employees to work from home to avoid traffic congestion as heavy rain is forecast across the capital from Wednesday until Friday.

Motorists already experienced long tailbacks as recently as Monday when afternoon downpours caused floods that lasted through the rush hour and on into the evening.

"So, the BMA has asked private company employees to work from home until Friday due to the forecast for heavy rain," said deputy Bangkok governor Tavida Kamolvej.

For those who have to work on-site, employers are requested to let them finish work early so they can avoid the worst of the jams caused by heavy traffic during inclement conditions, said Ms Tavida.

Ms Tavida acknowledged that drainage of floodwater has been slow, though most of the inundated areas in the city had been cleared by the end of Tuesday.

However, following the Meteorological Department's advisory, the BMA had already begun piling up sandbags and building levees in flood-prone areas such as Laksi, Don Muang and Bang Khen districts, Ms Tavida said.

The BMA will try to inform residents at least an hour in advance of downpours heavy enough to cause floods so they have time to make emergency arrangements or head home, she said.

Ms Tavida said Bangkok governor Chadchart Sittipunt met the Pathum Thani governor and the Royal Irrigation Department (RID) for talks on plans to divert floodwater into catchment areas, and gave assurances that every effort will be made to act swiftly in affected districts.

Mr Chadchart said that Chaeng Watthana Road was among the areas hit hardest by Monday's downpours and traffic congestion. Numerous vehicles were stranded in floodwaters as many drivers were not informed of the flood situation on the road, he said. 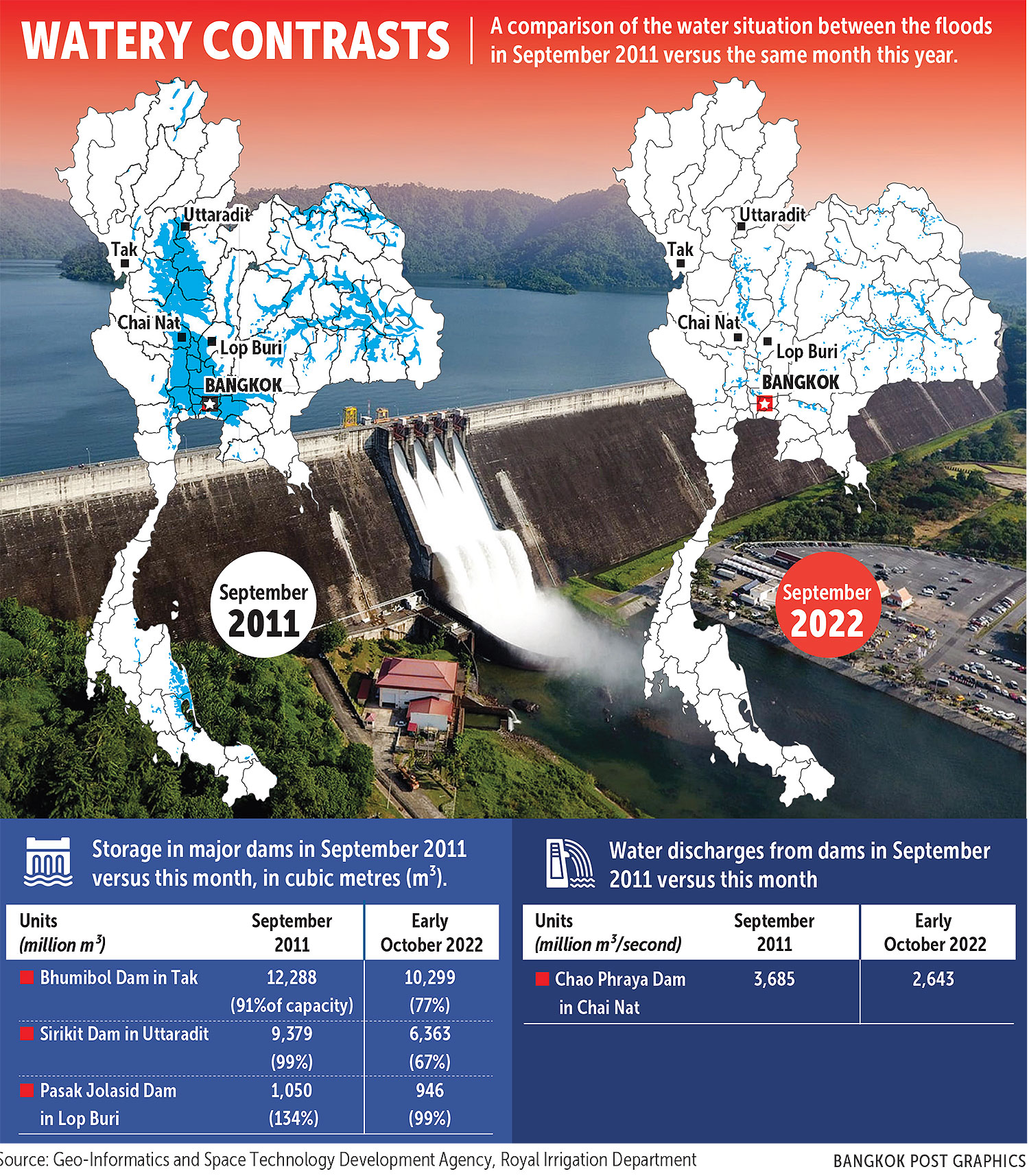 "We need to improve our communication [with people]," Mr Chadchart said.

He added that some of the water discharged from the Pasak Jolasid Dam in Lop Buri will reach Bangkok via Khlong Raphiphat, and the BMA is now in discussion with the RID about whether it would be feasible to divert any of the incoming water into the Chao Phraya River.

According to the Meteorological Department, rainfall in the upper parts of the North and Northeast will ease significantly by Sunday, although the Central Region, the East, the South and Bangkok and surrounding provinces may not be so fortunate.

He said the government is trying its best to ease the plight of flood victims and ensure compensation is provided to all affected groups, including businesses and farmers.

He also stressed the need for agencies concerned to work together to make sure drainage from one area does not affect another.

Gen Prayut said he had also been briefed on the progress of water-management projects worth billions of baht in Khon Kaen which his government had approved.

Some of them have not yet been constructed yet due to community resistance and other problems, the prime minister said.

"I want to ask for people's cooperation. Construction needs to go ahead to drain and divert floodwater in areas that have long needed better water management," Gen Prayut said, adding that funding for the Northeast has been boosted to almost 10 billion baht for the coming year.

Gen Prayut will also inspect the situation in Phetchabun on Thursday and plans to visit Chiang Mai next week. 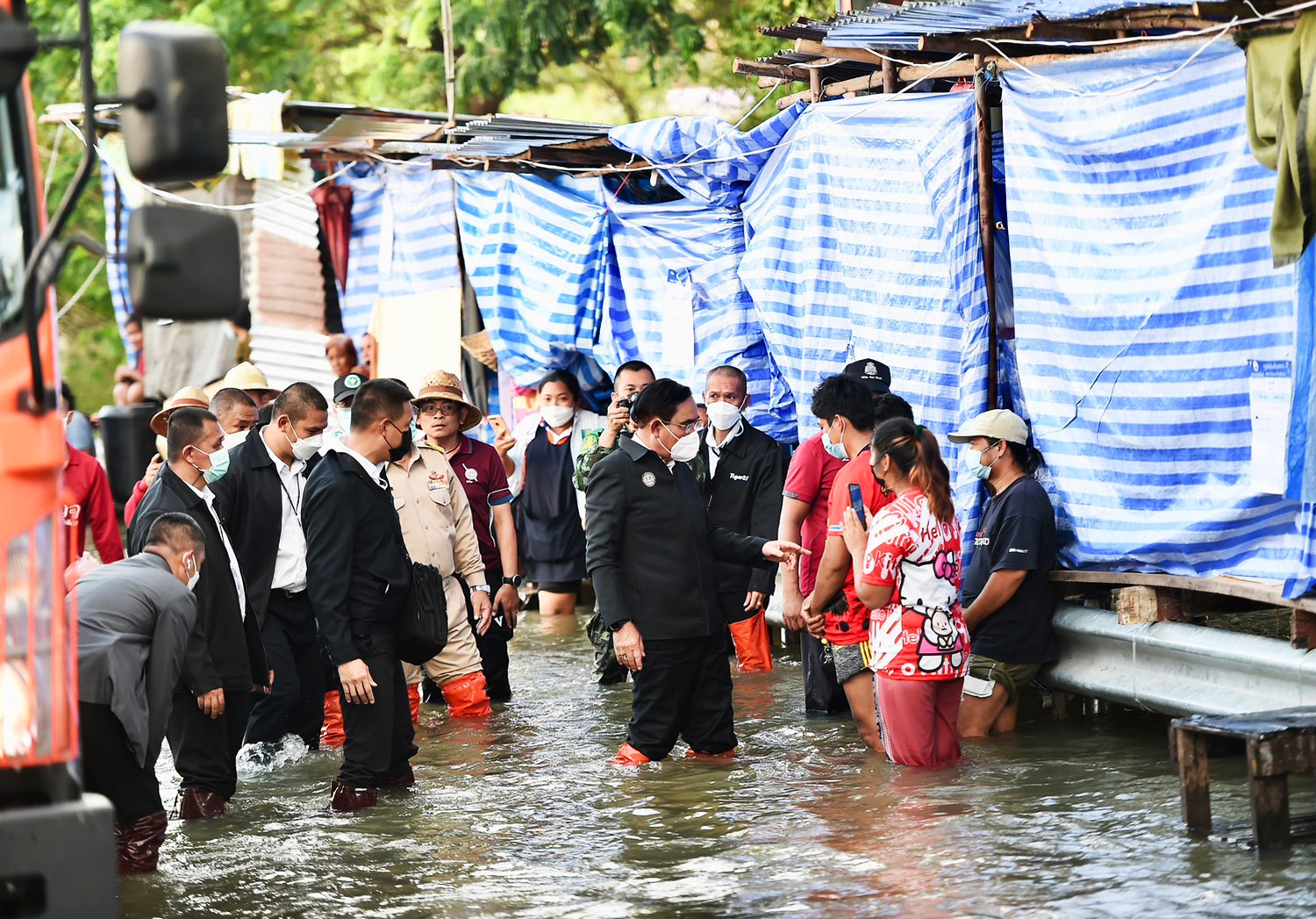