One killed, others injured in 3-vehicle expressway crash
Thailand
General

Rescue workers extract the injured from the wreckage of a pickup truck after the accident on the Burapha Withi expressway. One man was killed and four other people injured in the three-vehicle crash. (Photo supplied/ Sutthiwit Chayutworakan)

SAMUT PRAKAN: One person was killed and four seriously injured when two pickups crashed into the parked truck of a crew painting traffic lanes on the Burapha Withi expressway on Wednesday night.

The fatal crash occurred near kilometre marker 14+100 on the Bangkok-inbound side of the expressway in Samut Prakan province, said Pol Lt Phongsakorn Fungdet, deputy chief investigator at Bang Kaeo. It was reported around 11pm.

Police, a doctor and rescue workers rushed to the scene found a badly-damaged Nissan box pickup truck with Bangkok licence plates in the right lane with two injured people trapped in the wreckage. They were lifted out and taken to hospital, and later identified as the driver Niphon Sumalee, 32, and a teenage girl Wannapha Sumalee, 15,

A damaged six-wheel truck with Ratchaburi licence plate was jammed up against it and a Toyota pickup truck with Bangkok licence plates had run into the back of it and had major damage.

Two men were badly hurt and trapped in the wreckage. The injured were retrieved and sent to a nearby hospital.

The driver, identified later as Sulgiflee Roying, 22, was dead and trapped inside.  A large vehicle was deployed to pull the wrecks apart before rescue workers could extract his body.

Truck driver Phetprakarn Chuenchom, 48, told police that he and other members of the crew worked for a company hired to paint traffic lanes on the expressway. They were putting traffic cones on the  road behind the truck when he saw two pickup trucks approaching at high speed in the right lane.

The oncoming vehicles showed no sign of slowing or changing lanes. He and the other workers fled to the side of the road as the first pickup slammed into the back of the truck, and the second followed it.

The police investigation was continuing, with the examinaion of security camera recordings of the crash. 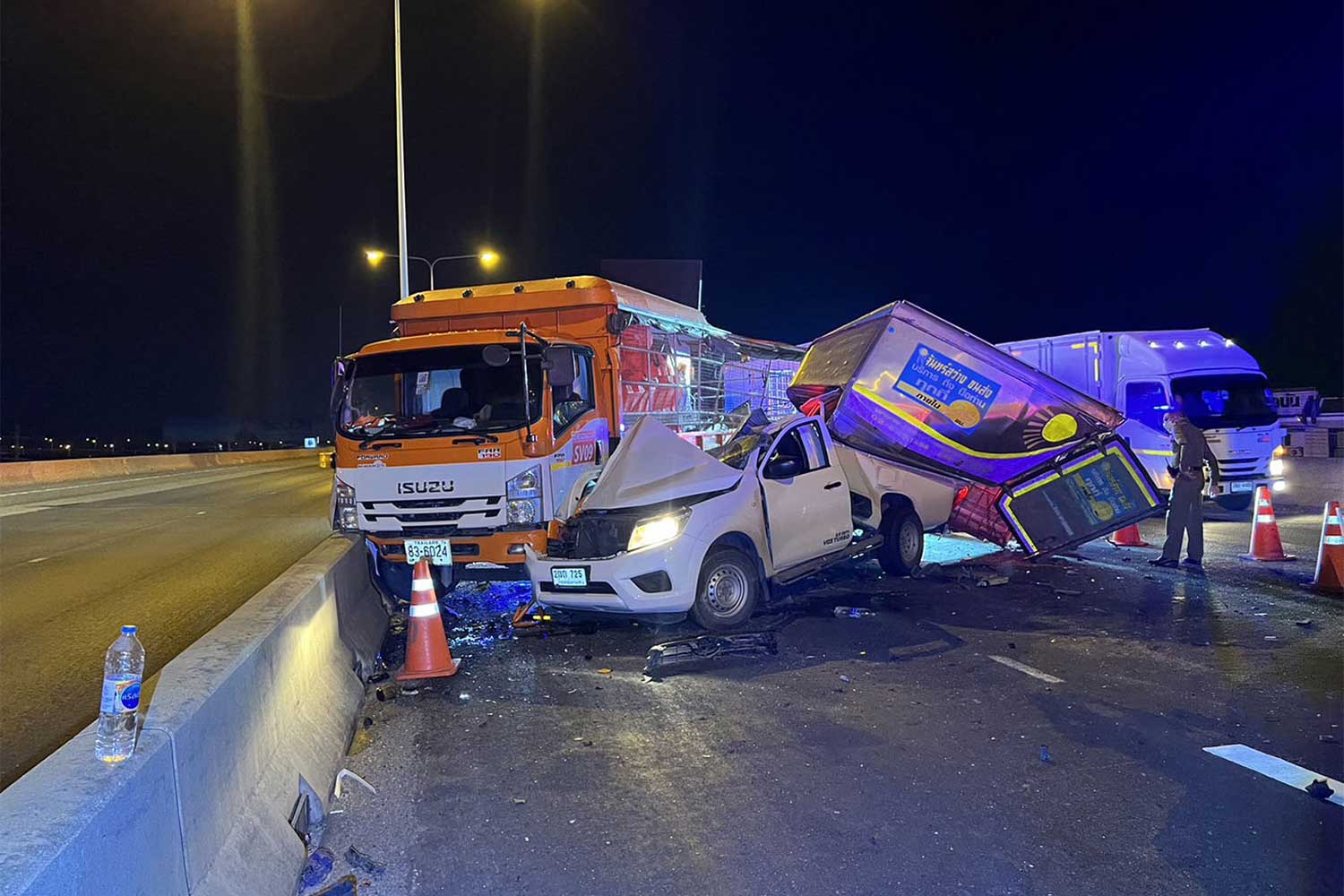