Riot police charge pro-democracy protesters including a monk near Democracy Monument, as they attempted to set off on a march to the Apec summit venue in Bangkok. (AFP Photo)

Police fired rubber bullets to prevent demonstrators moving from Din So Road near the Democracy Monument in Bangkok to the Apec summit venue on Friday, and made eight arrests.

The situation turned tense as the protest group calling itself “Citizens Stop Apec 2022’’ began to move from the site towards the Queen Sirikit National Convention Centre, the venue of the Apec summit. Crowd control police lined up to block them. Reporters and other people were ordered to leave the site.

Police asked demonstrators to return to the Lan Khon Muang Town Square in front of Bangkok City Hall, the designated site for their gathering. Senior police stood firm that they would not allow the protesters to move from the area.

Around 10am, leading protesters announced from a rally vehicle that they would raise the level of the rally and gave police 20 minutes to prepare before the protest group moved out. Demonstrators later moved closer to police vehicles and barricades set up along the road, resulting in a clash between riot control police and the protesters.

Police used shields and rubber batons to stop the crowd. They later arrested eight demonstrators, seven men and one woman, who were taken to Thung Song Hong police station.

Angry demonstrators kept shouting “Release our friends!’’ as they gathered near the front row of police on Din So Road. Riot control police armed with tear gas were in the second row.

About 10.05am, anti-government activist Patsaravalee “Mind’’ Tanakitvibulpon made a speech from atop a vehicle, criticising the government for using police to fight the people. She said the riot  police actions were tantamount to a violation of human rights and the liberty of the people, whose rights were protected under the democratic and constitutional systems. She demanded the immediate release of the eight protesters.

Around 10.12am, riot control police began firing rubber bullets. Ms Patsaravalee asked why they had to fire rubber bullets at people with empty hands.

"Police fired rubber bullets at us despite the fact we are unarmed. We never intended to assault them. They told us they would give way, so we could submit our demand.

"This is what happens under the government led by Gen Prayut Chan-o-cha. Police have no backbone and opt to use violence against people. Five demonstrators were injured and many arrested,’’ she said.

Pol Maj Gen Achayon Kraithong, spokesman for the security and traffic operations centre, said about 350 demonstrators who gathered at Lan Khong Muang Town Square began moving from there to submit their demand to the Apec summit around 8.50am.

Their march was against the law and contrary to crowd gathering conditions that authorities had  constantly kept them informed about, he said.

The demonstrators defied the rules by moving to Din So Road.

Police warned them through loud speakers, but the protesters paid no heed, he said.

Pol Maj Gen Achayon accused the protesters of assaulting riot police, throwing stones and other items at them, and damaging a police pickup truck. Five police were injured, he said. 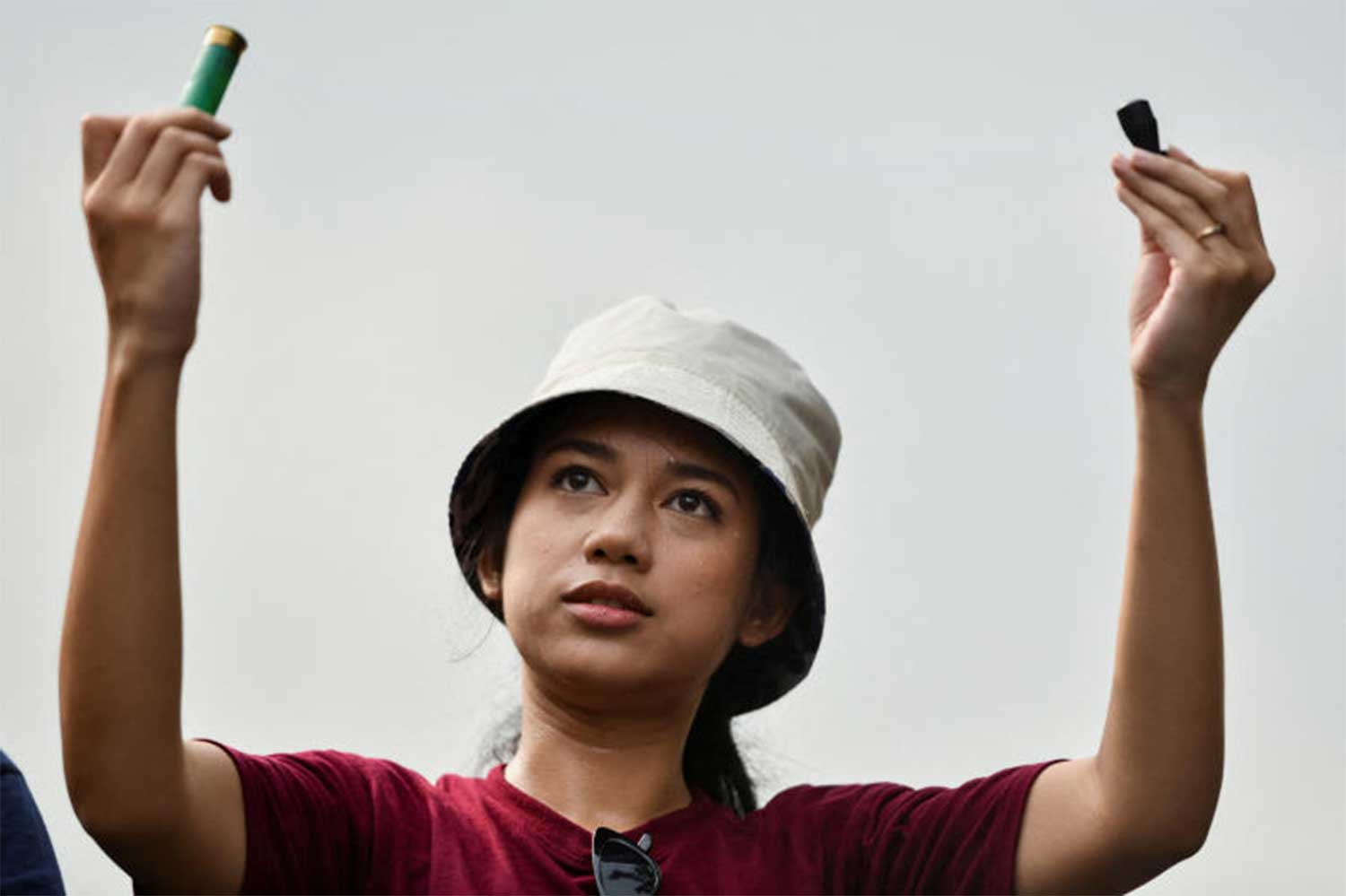 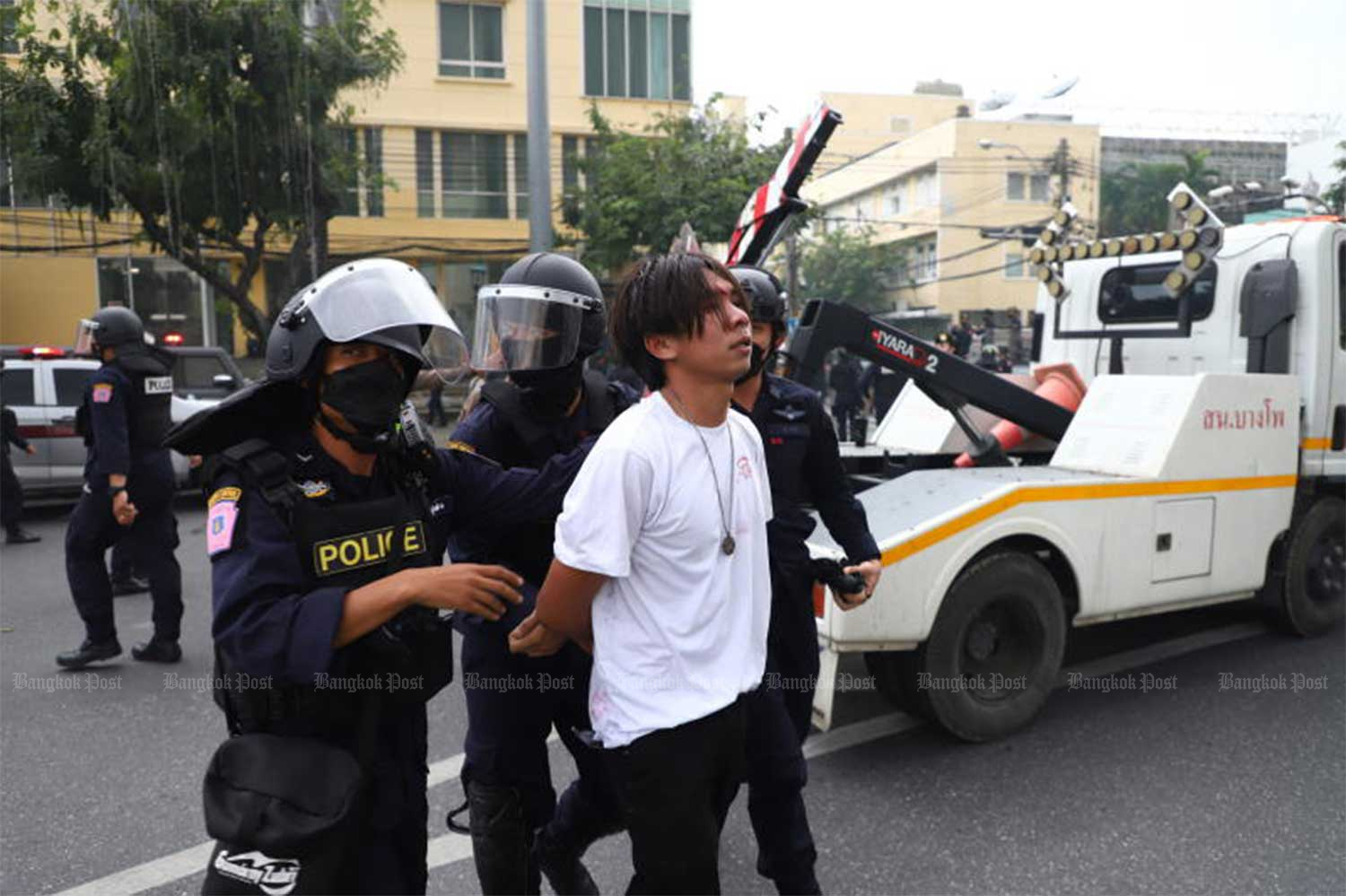