SPECIAL REPORT: Myanmar workers keen to return, but bosses, state must do better to keep them

Thailand has resumed importing legal migrant workers under memorandums of understanding signed with neighbouring countries after the Covid-19 pandemic eased.

During the pandemic, border closures and travel restrictions prevented them from returning to Thailand. Now the virus curbs have been lifted, workers from Myanmar, Laos, and Cambodia are in great demand.

Kowit Srihaengkhot, acting chief of Tak's employment office, told the Bangkok Post that a post-arrival and reintegration centre for migrant workers was set up in Mae Sot district to recruit workers under an MoU with Myanmar.

About 800 legal workers arrive via Mae Sot per day and they travel on to work in Bangkok and surrounding provinces. Most work in the construction and electronics manufacturing industries as well as in garment production factories, he said.

The Myanmar embassy is working with Thai officials to ensure that workers receive proper labour rights protection and welfare benefits, he said.

The Department of Employment (DoE) says Thai companies submitted applications to bring in about 400,000 workers under MoUs with neighbouring countries between December last year and last month.

Of that, more than 360,000 have been allowed to work in the country. The workers have to undergo health screening and attend orientation sessions to prepare them for working and living in Thailand.

A Myanmar worker, 36, who asked not to be named, said he is looking forward to working in the construction sector in Thailand.

He had worked in Thailand previously for almost four years, but he had to go back to Myanmar to extend his passport. He was about to return to Thailand when the pandemic hit the region.

With travel restrictions, lockdowns, and border closures, he was unable to return until now.

The age requirement for workers in the MoU system is 18-39 years old.

Zaw, 39, said he worked in a wood processing factory in Pathum Thani before the pandemic and received a daily wage of 330 baht.

After one year of work, the employer told him the business was not doing well. He was offered one day a week and told to take three days off without pay. He decided to quit and returned to Myanmar.

"This time, I hope I will get a decent job and earnings in Thailand," he said, adding he plans to work in the construction sector.

A 22-year-old Myanmar worker said she is excited to work at an electronics production factory in Samut Sakhon. "I plan to save money to travel to Pattaya and Phuket. Of course, I will also send my earnings back to my father," she said.

However, workers from Myanmar say they have to pay about 30,000–50,000 baht each to get jobs in Thailand, not to mention the personal expenses they have to shoulder each month.

Migrant workers in the MoU system expect to receive protection under the Thai labour law in terms of overtime pay, days off and workplace safety.

With work permits and a visa, they also expect to enjoy freedom of movement in Thailand. They are permitted to work in Thailand for two years and can extend their contracts for another two years.

Another Myanmar worker said he had to seek a loan of 25,000 baht and sell a cow for 1,700 baht to raise enough money to find a job in Thailand.

"Procedures and paperwork took 45 days. Now, I cannot wait to work in Thailand," he said.

Another worker from Myanmar said a passport application fee usually costs about 350 baht, but he could not apply for the document himself so he had to pay a broker 2,500 baht to take care of the matter for him.

Under the MoU system, Thai employers have to submit migrant labour recruitment applications to the DoE and its provincial offices. They can do so themselves or seek the help of job recruitment agencies.

The DoE and its provincial offices forward the employers' requests to neighbouring countries via their embassies.

Those countries will recruit and make contracts with workers and send the verified lists of workers to the DoE via Thai embassies and the lists will be forwarded to the employers. 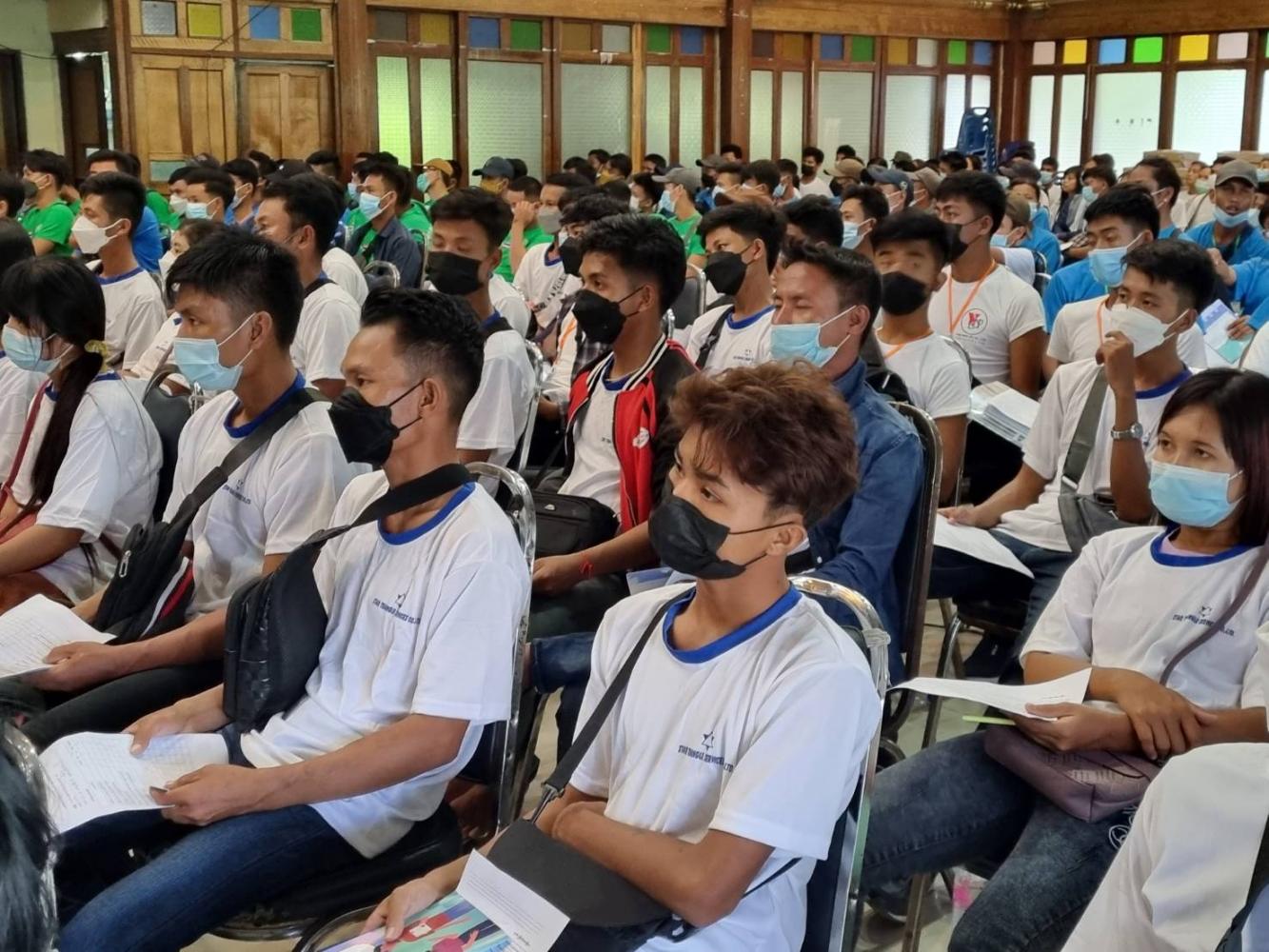 Myanmar workers who finish obtaining their visa from immigration police wait at the Ministry of Labour in Tak to undergo training on working in Thailand before getting a work permit. (Photo; Penchan Charoensuthipan)

However, migrant workers in Tak's Mae Sot district have complained they get paid less than the daily minimum threshold.

They said they work 14-15 hours a day and receive only 180 baht a day. Sometimes, wage payments are delayed. Some employers also owe them unpaid wages, making life difficult.

Workers also claim some employers seize their work permits and ID cards to deter them from quitting and seeking better jobs. They are given only photocopies of the documents, according to a source.

With only the photocopies, they often face extortion from the authorities who randomly check their documents. "These workers are like ATMs to those officials despite them being legal workers," the source said.

Most businesses in Mae Sot hire workers from Myanmar on a seasonal basis under Section 64 of the Alien Labour Management Act.

Workers are given border passes issued by the Myanmar government to apply for three-month work permits with a 30-day visa.

The source said these workers try to keep a low profile and do not dare to clamour for rights and benefits for fear they will lose their jobs.

Workers who spearhead campaigns for their rights will be blacklisted and local operators refuse to employ them, the source said.

If authorities strictly enforce labour laws to ensure rights and benefits for migrant workers, there is no need for them to make such a move, the source said.

An official from a non-governmental agency said some migrant workers have now been informed about their rights and the benefits they are eligible to receive. They also appoint leaders to offer advice to workers and liaise with other agencies.

So, the Tak governor has asked his counterpart in Myanmar's border town of Myawaddy to speed up issuing border passes for new workers arriving now the border has reopened, Mr Chaiwat said.

He said migrant workers under the MoUs are allowed to work in Bangkok and surrounding provinces while seasonal workers holding border passes are permitted to work only in Mae Sot, Phop Phra, and Mae Ramat districts and they must come only from Myawaddy.

A proposal is also being discussed to import workers from other Myanmar cities such as Hpa-an and Mawlamyine, he said, adding these seasonal workers are also employed in other provinces which border neighbouring countries, such as Chiang Rai, Kanchanaburi, Ranong, Chanthaburi, Sa Kaeo, Trat, Surin, and Si Sa Ket.

Mr Chaiwat clarified issues related to workers' complaints that they receive lower wages than the daily minimum threshold and that their work documents are seized by employers.

He said that while employers provide accommodation for workers, workers must be responsible for paying their own power and water bills.

In Mae Sot, workers' accommodation is located in factory compounds to ensure order and avoid clashes with nearby communities, he added.

He said deducting workers' electricity and water expenses from their wages is not allowed by law.

As a solution in line with the law, once workers receive their wages on payday, they have to pay their bills on the spot, he said.

When importing migrant workers, some employers pay the visa and work permit fees for workers first and the workers will repay them later, he said.

Employers will have workers sign consent letters to allow employers to keep their work permits.

"This is intended to prevent workers from suing employers given that the documents are the workers' personal belongings.

"Workers will get their documents back when they pay off the money owed to the employers," Mr Chaiwat said.

Some legal workers are forced to work illegally again due to several factors including high expenses as well as impractical rules and regulations, he said.

"Registration should be made easy and fee rates and other expenses should be affordable to both employers and workers.

Migrant labour rights protection should also be increased so workers can have better access to welfare benefits they deserve," he said.