PATTAYA : Officials at the Immigration Department's Chon Buri office yesterday identified a Thai woman in Pattaya who had escorted the Iranian bomb suspects during their stay in the resort town. 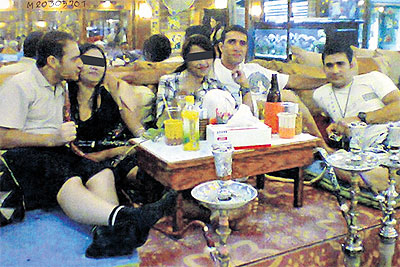 Two Thai women have fun with the three Iranian bomb suspects at a restaurant in Pattaya. Masoud Sedaghat Zadeh, left, was arrested in Malaysia, Mohammad Khazaei, centre, was detained at Suvarnabhumi Airport, and Saied Moradi was badly injured in the bombings. PORNPROM SARTTRABHAYA

Her account, and photographs taken with her mobile phone, could help authorities confirm whether the suspects know one another.

The woman, in her twenties, and identified only as Nan, told the immigration officers that she had escorted Mohammad Khazaei, who was detained at Suvarnabhumi airport late on Tuesday after a series of explosions on Sukhumvit Soi 71.

Mr Khazaei met Ms Nan near the Balihai area in Pattaya. She said the Iranian asked her to escort him during his stay there because he was not good at speaking English.

They were later identified from a group photo on Ms Nan's mobile phone as Saeid Moradi and Masoud Sedaghat Zadeh, the third bomb suspect who was arrested in Malaysia yesterday.

During their stay in Pattaya, from Feb 8 to 13 according to their hotel's registration, Ms Nan and her friends hung out with the three men. In one group gathering, shown in a photo, they were winding down in a bar in a hotel. Ms Nan said they had drinks and played snooker together.

Ms Nan was with Mr Khazaei in his room as well but didn't detect any irregularities except one time when he barred her from approaching a closet in the room. On the last day, Monday, Mr Khazaei told her that he would go home. So she phoned a taxi to pick him up.

"What we got from Ms Nan is circumstantial evidence that helps confirm to us that they were here together in Pattaya," Pol Lt Gol Thawatchai Nongbua, inspector of Chon Buri Immigration Office, said.

Earlier, the suspect had showed signs of stress and refused to eat. After he met Ms Nan, he appeared more relaxed and agreed to eat some food, Pol Gen Priewpan said.