Four soldiers and a rubber tapper were killed in two separate attacks in Narathiwat and Pattani on Wednesday night and Thursday morning, as army chief Prayuth Chan-ocha came out strongly against the idea of a special administrative zone for the deep South. 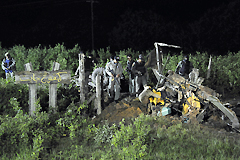 Four soldiers were killed and another one injured when a bomb went off on a rural road in Narathiwat on March 7, 2012. (Photo AFP)

The four soldiers were killed and another seriously injured when a bomb exploded on a rural road at Ban Yaba in tambon Rueso of Narathiwat’s Rueso district late on Wednesday night.

Twelve soldiers from the Narathiwat 30 special force were returning to base after providing security for people at Wat Ratsamosorn in tambon Rueso municipality. They were travelling in two pickups. Insurgents detonated a 20kg home-made bomb under one of the vehicles.

Local Buddhists had turned out in large numbers last night to walk with lighted candles in their hands around the temple to mark Makha Bucha Day.

The explosion blew one army vehicle in half, reducing it to a total wreck and instantly killing Sgt Dejpol Saiwannee, Cpl Sompong Kaesanan, Pvt Suwat Ninpak and Pvt Kamol Panthong.

In Pattani, a rubber tapper was killed in a drive-by shooting on a rural road at moo 4 in tambon Khao Toom of Yarang district early Thursday morning.

Yarang police chief Uthai Thipayasepa said Kamaruding Masae, 42, and his wife, Samasae, were riding a motorcycle back home from their rubber plantation when a gunman riding pillion on another motorcycle fired at them with a 9mm handgun. The attackers then fled.

Pol Col Uthai said Kamaruding was hit twice, in the head and torso, and died at the spot. Mrs Samasae was slightly injured when the motorcycle crashed to the ground.

Gen Prayuth said the government had already decentralised administrative power, so it was unnecessary. 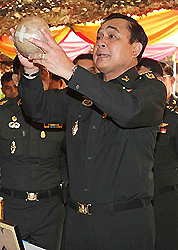 He was replyng to questions about a report that Deputy Prime Minister Yutthasak Sasiprapa, who is in charge of security affairs, had asked various agencies to look into the Pattani Maha Nakhon proposal.

The proposal was made by a Pheu Thai panel chaired by Prasop Bussarakham, a former MP for Udon Thani.

The army chief said he had talked the matter over with Gen Yutthasak yesterday, and the deputy premier said he did not mean to imply that the proposal would be implemented, because it was a matter for the government to decide.

Thailand has already decentralised administrative power through the election of tambon and provincial administration organisations.  Provincial governors were still appointed only to represent the central government, Gen Prayuth said.

The army chief, whose work concerns national security, said he did not think it necessary to have a special administrative zone for the southern border provinces.

Since the resurgence of the insurgency in January 2004, there have been about 11,000 violent incidents instigated by secessionists in the Muslim-dominated southernmost provinces of Yala, Pattani and Narathiwat, with almost 5,000 people killed and nearly 8,000 injured.