A fire broke out in an office building of the Rawang tambon administration organisation in Pattani's Yarang district on Sunday night, police said. 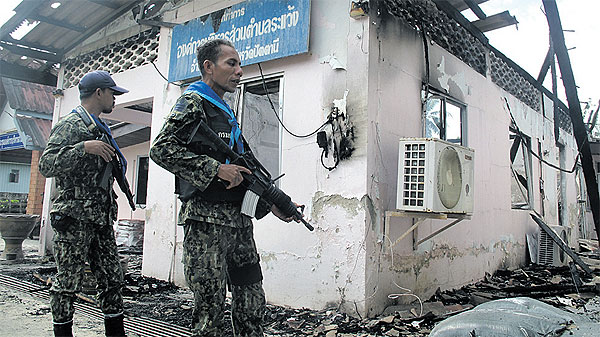 The fire started at the back of the single-storey building on the Yarang-Mayor Road in Ban Jabapaeh.

Police and forensic officers inspected the scene yesterday morning and estimated the cost of the damage at 1 million baht. The fire broke out as the army was relocating an outpost from tambon Rawang following a sex scandal involving a teenage Muslim girl and a soldier.

Three trucks were sent in yesterday to transport belongings after villagers demanded the outpost be dismantled.

Meanwhile, two soldiers were wounded in a bomb attack while providing security for teachers in Pattani's Sai Buri district yesterday.

Pvt Makayi Yuso, 23, and Pvt Thirapong Hassaro, 23, were hit in the body by shrapnel when a bomb hidden in a motorcycle went off near Ban Joh Kuyae in tambon Tabing.

The victims were part of a group on four motorcycles taking eight soldiers from Pattani Task Force 26 past the motorcycle which was parked on a road.

Police said the motorcycle which carried the bomb was stolen from Sai Buri after a policeman and his son were shot dead in January.

Pol Lt Angkoon Iampho and Sgt Chaiporn Saengngam, of Chanae police station, were unharmed when the bomb, planted on a road, went off and rocked the car they were travelling in.

About 15kg of explosives were packed inside a cooking-gas cylinder. The blast left a 60cm-deep hole in the road and knocked out telephone services for the entire village.