Don Mueang to be used for more budget flights

The government will scrap its single-airport policy and encourage low-cost carriers to shift to Don Mueang airport to help ease congestion at Suvarnabhumi airport. 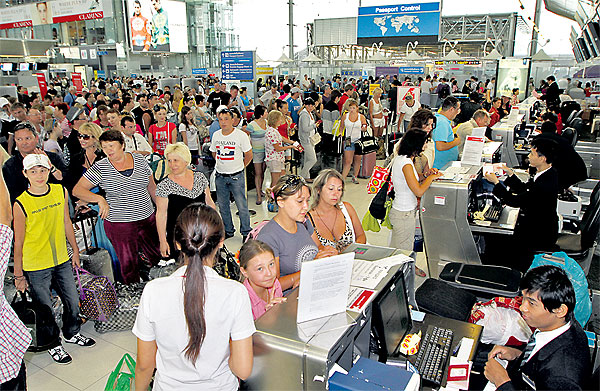 People wait in long queues at the check-in counters inside crowded Suvarnabhumi airport yesterday. The government plans to move low-cost, chartered and non-connecting flights to the old Don Mueang airport to ease congestion.

"Don Mueang airport will continue for the near future. It's clear that the single-airport policy isn't practical due to the problems of congestion," Mr Jarupong said.

"I don't want to say we are adopting a dual-airport policy. But for the long term, we must put Don Mueang to use." Don Mueang, officially opened for commercial service in 1924, was replaced as Bangkok's main international airport in 2006 with the opening of Suvarnabhumi.

Don Mueang reopened for commercial services this month after being shut for four months due to last year's floods.

Prime Minister Yingluck Shinawatra has said incentives should be offered to encourage low-cost airlines to shift to Don Mueang.

Suvarnabhumi is expected to handle 51 million passengers this year, up from 47.2 million in 2011 and well beyond its designed capacity of 45 million. Flight delays of 15-30 minutes have been increasingly common in recent months, while passengers complain of lengthy queues at check-in and immigration counters.

"It is more convenient to operate from Don Mueang than Suvarnabhumi, but the point is that a clear policy is needed. The government shouldn't mention a single-airport approach one day then change later."

Mr Udom said Orient Thai has had to move its operations three times in recent years, with staff forced to relocate each time.

The flooding at Don Mueang late last year was another concern, he said, adding that the government needed to clearly explain its flood prevention plans for the airport.

Tassapon Bijleveld, chief executive officer of Thai AirAsia, said he did not strongly oppose the relocation policy but would wait and see if the government would come up with reasonable incentives. He agreed that relocation to Don Mueang would pose many problems, including negative impacts on staff who had already relocated to be near Suvarnabhumi.

Since Don Mueang reopened on March 6, only Nok Air has resumed operations there. Airports of Thailand Plc has tried to woo both Orient Thai and Thai AirAsia to Don Mueang _ with no success _ to help ease traffic at Suvarnabhumi.

Airlines say one major obstacle is a long-standing policy calling for Don Mueang to service only point-to-point domestic services. The policy was set by the Surayud Chulanont government in 2007 as part of its decision to reopen Don Mueang following the opening of Suvarnabhumi the previous year.

If all three major budget airlines _ AirAsia, Nok Air and Orient Thai _ shifted to Don Mueang, it would reduce passenger loads at Suvarnabhumi by up to 17 to 18 million a year.

Airlines are also concerned about overseas tourists who may be forced to transit between the two airports.