Police have identified the insurgent gang they believe planted the car bombs in Yala and Hat Yai on Saturday which killed 14 people. 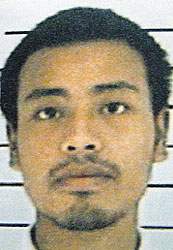 Sahudin Tohjehmah, whose group is reportedly active in Yala’s Ramandistrict, is suspected of being the mastermind behind the multiple bombings in Yala on Saturday. MUHAMMAD AYUBPATHAN

Police believe further attacks are likely in Hat Yai, and have identified the four vehicles which they say could be used to plant the bombs.

The blast on Saturday at the Lee Gardens Plaza Hotel and shopping mall was caused by explosives left in a stolen vehicle, abandoned in the hotel's carpark, they confirmed Sunday.

They say the triple blasts in downtown Yala _ which occurred about the same time and took 11 of the 14 lives _ were also planted in stolen vehicles.

Insurgents stole most of the vehicles in previous attacks on security targets.

The vehicles police believe could be deployed in further attacks in Hat Yai were identified as a blue Isuzu pickup truck, a bronze Isuzu pickup, a white Toyota pickup and a black Honda sedan.

Police believe insurgents may have used them as getaway vehicles as they left the scene of the Saturday blasts.

Security footage shows suspected insurgents leaving the scene of the intended blasts in Yala in a Isuzu pickup truck and a Toyota pickup. In Hat Yai, they left in a black Honda sedan.

National police chief Priewpan Damapong said he believes the blasts were coordinated and mounted by the same people.

Eight of the 11 people killed in Yala died at the scene. Another three died later at hospital. About 100 people were injured, including 31 people who were were hospitalised, 10 in a serious condition. In Hat Yai, three people were killed in the hotel blaze, and more than 350 injured. Of these, 133 were still being treated in hospital yesterday.

The black Honda Civic sedan in which suspected insurgents left the scene of the hotel belonged to 39-year-old Thanasorn Kuasuk, an officer in Narathiwat's Si Sakhon district who was shot and killed in his office last October. The assailants fled in his car.

A police source said the sedan took gas and the insurgents probably used liquid explosive to set off the propane tank.

Police and forensic officials yesterday cleared three of five carpark floors under the hotel, making sure no other bombs were hidden there. The military is reviewing the hotel's security system.

More than 200 people showed up with car registration papers to claim their vehicles from the carpark.

Insurgents travelled in it on March 9 to attack a security checkpoint in tambon Kalor of Raman district.

The Toyota pickup also caught in security footage was stolen from a market in Muang district on March 20.

Fourth Army Commander Lt Gen Udomchai Thamsarot said on Sunday that authorities have identified a group responsible for the bombings and expect to make arrests soon.

A police source said the bombs were believed to be the work of a hardcore insurgent group led by Sahudin Tohjehmah, who is active in Raman.

Prime Minister Yingluck Shinawatra expressed her condolences to the families and the victims of the bomb attacks, but said she did not plan on inspecting the area herself.

"Some staff would be assigned to provide security for me and I think that would hinder their efforts," she said.