Don Mueang Airport is to be repackaged as Bangkok's low-cost regional airport after leading budget carrier AirAsia agreed to shift its base there. 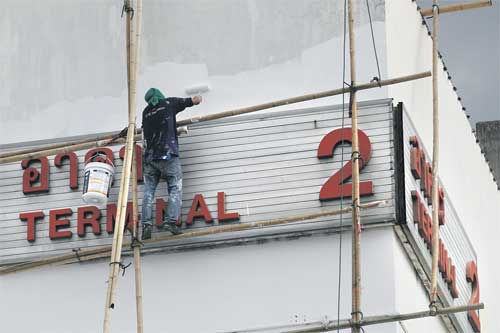 AirAsia yesterday clinched a memorandum of understanding with Airports of Thailand (AoT) to operate its Bangkok flights in and out of Don Mueang from Oct 1. It currently flies out of Suvarnabhumi International Airport, the city's main gateway.

The airline became the first of 14 scheduled airlines, operating under the basis of discounted fares and point-to-point flights, to accept AoT's incentives for relocation, which were endorsed by the cabinet last Tuesday.

AoT president Anirut Thanomkulbutra yesterday said no preferential treatment was given to AirAsia.

He affirmed the incentives rendered to the airline are standard and are the same as those which will be offered to the 13 other airlines targeted by AoT for relocation from Suvarnabhumi.

It also means AirAsia did not pursue its earlier request for AoT to turn over the whole of Terminal 1 (T1), one of Don Mueang's three passenger terminals, for its own exclusive use.

Tassapon Bijleveld, chief executive of Thai AirAsia, the local offshoot of Malaysia-based AirAsia, said yesterday that Don Mueang will be the airline's "permanent" base.

He said the agreement will continue well beyond his tenure as the airline's leader.

All the flights operated by the 14 airlines, as well as chartered flights, will be bundled at Don Mueang's T1, which has the capacity to handle up to 16 million passengers a year.

AoT would consider reopening Terminal 2, capable of accommodating 9 million passengers a year, only if T1 is used to capacity and requires easing of congestion, Mr Anirut said.

If all 14 airlines agree to come back, Don Mueang _ which was replaced by Suvarnabhumi as the country's main airport in 2006 _ could see up to 14 million passengers pass through each year.

The AoT chief said three or four other airlines besides the targeted 14, including Orient Thai, also planned to shift their bases to Don Mueang.

However, Orient Thai Airlines executive Udom Tantiprasongchai complained yesterday that his airline, together with Nok Air and N-Jet (a chartered airline), which was earlier based at Don Mueang until moving to Suvarnabhumi after last year's flooding, is not entitled to the incentives.

He said Mr Anirut had earlier encouraged Orient Thai to move back to Don Mueang and the airlines had prepared to move from today.

But he said Orient Thai was then informed that it would not receive the same incentives as the other 14 airlines, which had been based at Suvarnabhumi since the new airport's outset.

He will meet executives of the two other airlines today before deciding his next move.

Mr Anirut said that Don Mueang will be officially up and running on Oct 1, when further renovation of T1 will be completed.

He said Don Mueang airport must earn at least 500 million baht a year if it wants to write off asset impairment costs, Mr Anirut said.

AoT expects the airport will break even in three years, as the rising number of passengers at Suvarnabhumi will make for an increasing overspill to Don Mueang.

Passengers will be a major source of revenue for Don Mueang airport as they are required to pay a passenger service charge, which is also known as the airport tax, an AoT source said.

Revenues from duty free shops will be less than at Suvarnabhumi because shopping is not as popular among most passengers of budget carriers, the source added.

AoT will nevertheless call for bids for duty free shops, but it will not grant a concession to the King Power Group, which already has the rights to Suvarnabhumi, AoT chairman Sumet Photimanee said.

He added that AoT has allocated 154 million baht for the Don Mueang plans, topping off the 1.64-billion-baht budget for recovery from last year's floods.

AoT will arrange shuttle buses and other public transport for passengers transferring from Suvarnabhumi to Don Mueang, ACM Sumet said.