YALA : Five policemen were killed by a car bomb in Raman district Wednesday, in an attack which authorities believe was in retaliation for recent drug suspect arrests. 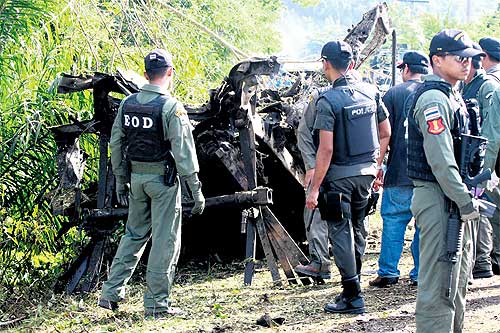 Police inspect the wreckage of a pickup truck in which abombwas planted, after its explosion killed five police officers travelling in another pickup truck in Ban Buke Yaera in Yala’s Ramandistrict. MUHAMMADAYUB PATHAN

The force of the explosion hurled the pickup truck into the canal.

According to investigators, the bomb was hidden in a 50-kg gas cylinder placed in a stolen pickup parked near the canal. They also found spent cartridges left by the attackers who sprayed bullets at the victims following the explosion.

They made off with the officers' hand guns and M16 and HK assault rifles, police said.

Investigators believe the bombing was carried out by a group of insurgents and suspected bomb maker, Phaisol Hayisamaae, a cousin of Sobri Hayisamaae who was recently arrested by police on drug changes.

Mr Sobri and another man in police custody, Aliya Waekalisong, are accused of drug trafficking in Raman district.

Police suspect Wednesday's bombing was in reprisal for their arrest.

In Narathiwat, army chief Prayuth Chan-ocha apologised to residents in Sungai Kolok district Wednesday for the army's failure to prevent the bomb attack which wounded eight people on Friday.

Gen Prayuth said during a visit to Sungai Kolok that he accepts sole responsibility for the attack and vowed to improve security.

Early last month, he told security forces to be on alert for possible attacks during the Muslim fasting month of Ramadan. The Sungai Kolok blast occurred on the first day.

The bomb, packed in a gas cylinder in a stolen pickup truck, exploded in front of Pro Computer and OA Thailand Co, an electronics retailer, setting the company building and nearby homes ablaze. After returning to Bangkok Wednesday, Gen Prayuth promised to put in a request for 30,000 surveillance cameras to be installed in insurgent-plagued areas, including Sungai Kolok district.

The cameras may help ease pressure on soldiers who have to patrol these areas day and night, he said.

In a separate development, police seized 200,000 methamphetamine pills and arrested seven suspected traffickers in separate busts in Bangkok and Yala.

Pol Maj Gen Surapol Thuanthong, deputy commissioner of the Narcotics Suppression Bureau, said the suspects were small-time traffickers who kept the drugs and delivered them to peddlers in the Bang Chak area of Bangkok. They allegedly earned 5,000 baht per delivery.

In the southern province of Yala, police arrested Sobri Hayisama-ae and Aliya Yaekalisong, both 25, with 39,200 methamphetamine pills, a shotgun and an assault rifle in their possession on Monday.

Both suspects are from tambon Noen Ngam of Raman district. Mr Sobri is a cousin of Faisal Hayisama-ae, who is suspected of carrying out bomb attacks at many locations in the far South, including at Hat Yai airport in 2005.