South 'may be lost if UN intervenes', army general warns

Thailand might lose the deep South if the United Nations is allowed to intervene and help end the violence in the region, deputy army chief Daopong Rattanasuban said on Friday.

"We have not lost our land yet, but if we're complacent and let the UN intervene and hold a referendum, then we're finished," Gen Daopong said.

"We won't let this happen and we'll fight it to the death, but our Muslim brothers and sisters have to understand us because we're fighting against a small percentage of people who are using guerrilla warfare tactics." 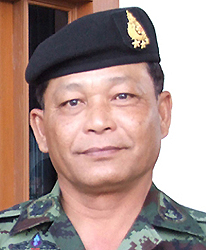 The insurgents wanted to get villagers on their side by telling them that the government and Thai Buddhists are evil, discriminating and unjust and that officials are using excessive force, he said.

However, 90 per cent of the two million Thai Muslims were well aware of the situation.

The problem in the South was sensitive because it involves religion. Officials needed to be patient and have a good understanding. Fortunately, Thai Muslims understand and the army is trying to gain their trust, he said.

The southern militants, after failing to mislead the villagers, tried to instill fear by setting off bombs and murdering security officers at random, he said.

"We know of many people who are involved in the insurgency movement, but we have to stick to the law. We cannot work blindly and arrest people without reasonable grounds," the deputy army chief said.

The army is not planning to impose a curfew that will affect the people's religious activities. A curfew would likely be applied on certain roads, he said.

"People have to understand that the situation in the three southern border provinces is not normal, like in Bangkok. If stringent measures are implemented we'll have to explain, but the people have to cooperate as well," he said.

Gen Daopong said Their Majesties the King and Queen have visited the southern border region every year to meet the people there.

"I believe there's not a single day when Their Majesties are not following news about the South and the incidents that affect the Thai Buddhists and Muslims there.

"I believe that if the situation eases or becomes peaceful, Their Majesties will be in better health," the deputy army chief said. 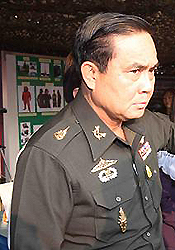 Army commander-in-chief chief Prayuth Chan-ocha said there are about 7,000 to 9,000 militants in the southernmost provinces.

"When asked whether we can kill them all [the militants] because they're Thais, if we do what are the implications?

"We can arrest them when we have enough evidence and we must use forensic scientific methods. If you don't understand, go watch the CSI series (on TV)," Gen Prayuth said.

When reporters asked him about the Department of Special Investigation's call for the army to file complaints against the  manufacturers of the controversial GT200 bomb detectors, he angrily responded that the issue was not about filing complaints but about explaining how the army came to buy them.

"The media should help us find other alternative equipment to protect soldiers and police officers from bomb attacks. If you can't find it, then don't ask because it's annoying," the national army chief said.

In Pattani's Saiburi district this morning, a military intelligence agent was killed in an ambush.

Pol Col Arsis Umayee, chief of Saiburi police station, said witnesses reported that Muhammad Korsafee, 28, was travelling home on his motorcycle on a local road in Ban Jalako of tambon Manang Dalam when gunmen hiding in roadside forest fired on him with M16 and AK47 assault rifles.

The victim fell to the road and the gunmen came out to shoot him again at close range. The attackers then stole his 9mm pistol and 30,000 baht in cash before fleeing.

Muhammad was a rubber sapling seller who also served as an undercover agent for a special military unit in Pattani, he said.

More than 5,000 people have been killed and over 9,000 hurt in more than 11,000 incidents, or about 3.5 a day, in the three southernmost provinces and the four districts of Songkhla since the violence erupted afresh in January 2004, according to Deep South Watch, an independent organisation monitoring the conflict.

SAMUT PRAKAN: A reclusive German monk was found dead in a house at Wat Asokaram in Muang district on Tuesday afternoon, police said.