Deputy Prime Minister Chalerm Yubamrung blamed Myanmar and Vietnam yesterday for a massive influx of drugs flowing into the country.

His comments came after Wednesday's seizure of 3.29 million methamphetamine pills with an estimated value of 1 billion baht in Nakhon Pathom's Buddha Monthon district.

He said the methamphetamine production bases are in Myanmar while the precursor chemicals used to manufacture the drugs come from Vietnam. 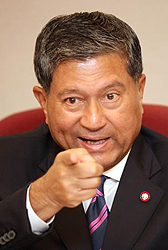 Mr Chalerm said the government's crackdown on pseudoephedrine, one of the main methamphetamine production precursors, has prompted traffickers to switch to Vietnam.

"The pills are manufactured in Myanmar while the trafficking route of base chemicals has switched to Vietnam after we successfully blocked pseudoephedrine," he said.

The United Wa State Army (UWSA) rebel group in Myanmar has been linked to the production of narcotic drugs.

Mr Chalerm said he had raised the issue with Myanmar during a recent meeting of Asean ministers but Myanmar claimed the rebel area is under the supervision of the military.

He said he would ask China to coordinate with Myanmar in addressing the narcotics problem.

Mr Chalerm also lashed out at the Office of the Narcotics Control Board (ONCB) which had cautioned him to be careful when discussing the drug situation to avoid straining bilateral relations.

Mr Chalerm said he would assign the Provincial Police Bureau 5 and the Border Patrol Police to work with the Pha Muang Task Force to contain drug smuggling along the northern border.

According to the deputy premier, the Pha Muang Task Force, which oversees the Thai-Myanmar border, estimates that 500 million speed pills are waiting to be smuggled in from Myanmar.

He said that Chiang Rai is a strategic location to curb drug trafficking.

Permpong Chavalit, deputy secretary-general of the ONCB, said he believed Deputy Prime Minister Chalerm sent the message in order to seek cooperation, not to assign blame.

Mr Permpong said the deputy premier wanted to make it clear that Thailand now faces a severe drug problem. Without close cooperation from neighbouring countries, it will be more difficult to suppress the drug trade.

Mr Permpong said Thailand has been cooperating well with its neighbours on drug suppression and prevention.

They have exchanged information on the drug trade and trafficking that led to arrests of drug suspects and seizures of drug shipments in past years, he said.

"For me, I don't think that the remarks of deputy premier Chalerm will affect our regional cooperation on drugs. Instead, it will make our neighbouring countries understand our problem more and our need for them to help," he said.

Mr Permpong said the government planned to announce its new anti-drug campaign next month; the existing campaign comes to an end this month.

He said the government's new campaign would focus on suppression, prevention, cooperation of people and communities, and rehabilitation of addicts.

Meanwhile, authorities yesterday announced two major drug busts of 10 kilogrammes of crystal methamphetamine, or ya ice, and 500,000 speed pills worth millions of baht.

The ya ice was seized on Wednesday afternoon and five people were arrested on Ratchadapisek Road for suspected trafficking. The suspects allegedly smuggled the drugs in from a neighbouring country. The value of the ya ice was estimated at 30 million baht.