NARATHIWAT - A gang of Islamic militants burned down the Bacho Tambon Administration Organisation office on Thursday, after failing to find any Buddhist employees to kill.

Seven armed men stormed into the offices of the Bacho TAO in Bacho district shortly after noon.

Abdulwaha Dulayapinij, the office’s chief administrator, told the police he and seven other employees were just leaving for lunch.

''One of them fired a gun into the air and ordered everyone to stay put in Yawi [a Malay dialect spoken by Muslims in the South] and then asked if there were any Buddhist Thais working here,” Mr Abdulwaha said.

“I told him there were none, and the outlaw was upset and said I had lied to him.” 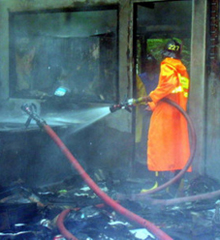 Mr Abdulwaha then explained there was a female Buddhist Thai civil servant identified as Suchada sae Li working at the TAO as a community development officer, level 3, but she was on leave.

Upset with the answer, two of the gunmen emptied a five-litre container of gasoline into the archive and equipment storage rooms, set fire to it, and then fled the scene.

Staff, villagers and a local disaster relief team tried to put out the fire, but the blaze spread quickly and destroyed the whole building.

Mr Abdulwaha said it appeared the assailants wanted to kill Ms Suchada who was the only Buddhist official at the Bacho TAO, and had planned to use the gasoline to burn her body.

He said the attack left him and the other staff in fear for their own safety and it was likely they would not return to work until the office was rebuilt.