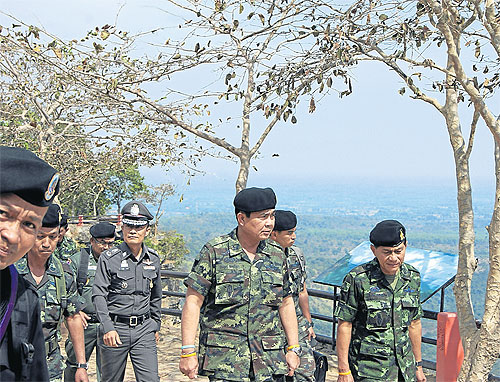 Speaking during his visit to the border areas in Kantharalak district of Si Sa Ket yesterday, Gen Prayuth said he did not care what the PAD was doing and it was not his duty to listen to what the group had to say.

"If it [PAD] were the government, I would have to listen to it. But since it is not, I have no idea what to do with it," he said.

Gen Prayuth said the PAD might have every right to encourage members of the public to participate in its move against the ICJ's consideration of the Thai-Cambodian border dispute, but he would not allow a single soldier to take part.

Gen Prayuth visited Thai troops from the 2nd Army who are stationed in the border areas. He said it was most important to emphasise that troops guarding the border have to try their best to avoid any confrontation with their counterparts, as otherwise it would eventually lead to injuries and loss of lives.

Meanwhile, the Senate's committee on corruption investigation and good governance promotion was told by a lawyer that Thailand could refuse to comply with any new ruling of the ICJ.

Sompong Sujaritkul, a former lawyer who fought the Preah Vihear case at the ICJ in 1962, said the case on the temple dispute was more than 50 years old. The ICJ no longer has the jurisdiction to review the case in order to deliver a new interpretation, he said.

The court could look into the matter again only if a new case is filed with it, Mr Sompong said. No matter how the ICJ rules, Thailand has the right to reject the verdict and this would not lead to any trouble, Mr Sompong said.

The US, for instance, has rejected an ICJ ruling and did not encounter any problem as a result, he said.

Phetchaburi senator Sumol Sutawiriyawat, chairman of the committee, said the panel will compile this information into a report and submit it to Prime Minister Yingluck Shinawatra.

Cambodia has asked the ICJ to reinterpret its 1962 judgement, which awarded Phnom Penh ownership of the temple.

The 4.6 sq km plot of land around the temple is claimed by both countries.Both Cambodia and Thailand will attend oral hearings on April 15-19.