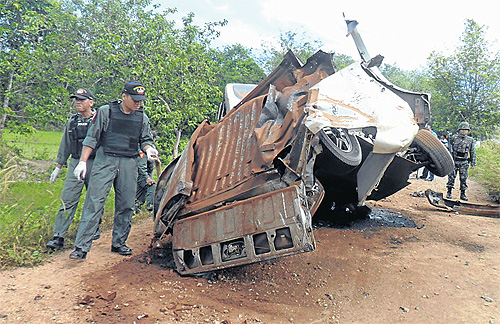 Security officers inspect the wreckage of a military vehicle which was damaged by a bomb blast on a road in Pattani’s Yarang district yesterday. The blast killed two soldiers from the No. 21 Pattani special force. ABDULLOH BENJAKAT

Soldiers from the No. 21 Pattani special force were patrolling a rural road in Ban Buenae Peedae in tambon Prachan of Yarang district when a buried homemade bomb exploded under their vehicle.

Forensic police were inspecting the scene.

Two highway police, who have not yet been identified, were also shot dead by suspected insurgents at 9pm yesterday at tambon Kalubee in Pattani's Sai Buri district.

A source said the officers were killed while patrolling on a road in the district.

Meanwhile, Deputy Prime Minister Chalerm Yubamrung said yesterday the government's peace process for the South was on the right track.

Speaking after his return from a three-day visit to Malaysia, he said details of his meeting with Malaysian Prime Minister Najib Razak were confidential.

"Talks must be held. If [the insurgents] don't listen to us, we have to find and ask for help from people to whom they will listen," Mr Chalerm said.

He refused to say how Malaysia viewed the insurgency in the deep South.

"It is confidential, but we talked a lot and it's so far so good," he said.

The deputy prime minister said the military was not left out of the loop. Army commander Gen Prayuth Chan-ocha was aware of every step of the Malaysian visit, he said.

Mr Chalerm said he is also seeking a meeting with former Malaysian prime minister Mahathir Mohamad, who is in charge of Thai-Malaysian border economic development. The meeting details have not yet been confirmed, he said.

Mr Chalerm said he is also concerned about Thais working in a restaurant chain in Malaysia which has been linked with financing for the southern separatists.

Of the more than 150,000 Thais employed in Malaysia by the Tom Yum Kung restaurant chain, only 6,900 are legally registered, he said.

The remainder are mostly employed as waiters and waitresses.

Mr Chalerm said if the Thai workers at the restaurants are registered, they will be better paid, making them less vulnerable to overtures by separatists.

"[With better livelihoods], they will be able to say no if they are urged to do bad things," he said.

The operators of the restaurants have denied they financially support the rebels.

Mr Chalerm said tackling the insurgency in the deep South would take time.

"If the local economy prospers and people receive proper education, the situation will improve," he said.

After his planned talks with Mr Mahathir, Mr Chalerm's intends to visit Indonesia.

A source said Mr Chalerm plans to ask Indonesia to act as a mediator in the far South problem.