Two people were killed and three wounded in separate attacks in the restive South yesterday, including a pickup truck driver who was shot dead as school children on board his vehicle looked on. 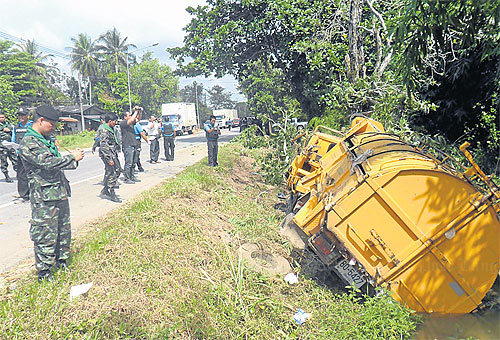 Soldiers inspect the site of a gun attack on the Khok Pho-Yala road in Khok Pho district of Pattani. A rubbish truck plunged into a roadside ditch after coming under fire from two motorcycle gunmen yesterday. Three men on board the truck were shot and seriously wounded. ABDULLOH BENJAKAT

Mayeeda Lameng, 45, who witnessed the attack, told investigators a man riding pillion on the motorcycle opened fire at the pickup driver.

The driver was identified as Pannawat Tohfai, aged 38. He was hit three times, in the head and upper body, and died at the scene.

Mr Mayeeda said the shooting happened in full view of seven students, who were seated in the back of the vehicle. All the children were safe.

In Pattani's Khok Pho district, three employees of a tambon administration organisation (TAO) were wounded, one of them seriously, in an attack on a rubbish truck yesterday.

Pol Lt Col Chamlong Suwarat, the tambon Napradu police chief, said the attack occurred about 10am while the garbage truck operated by Makrut TAO was travelling along the Khok Pho-Yala road in Khok Pho district of Pattani, heading for a rubbish dump.

Two men on a motorcycle opened fire at the truck with handguns. The driver lost control and the truck rammed into a tree and roadside ditch. Somchok Madmalai, 48, the driver, was shot in the head and seriously wounded.

Also wounded were garbage collectors Serm Poonkaew, 56, who was hit in the right shoulder, and Prapas Ounthong, 50, who was shot in the left leg. All were admitted to Khok Pho district hospital.

Pol Col Suchart Asawin, superintendent of Khok Pho police station, said police received a report of a shooting at a house in tambon Khok Pho about 7am. Officers found the body of Rorham Dorlor, who had been shot in the head.

Meenoh Mahmu, 68, the victim's wife, told police her husband was taking a ritual bath in a pond next to their house early in the morning when it was still dark. She heard a gunshot.

When she went outside the house she found her husband had been slain.

Police said Rorham had regularly exhorted youths in the area not to get involved in drugs.